How To Wake Up Your Ski Muscles and Help Them Recover 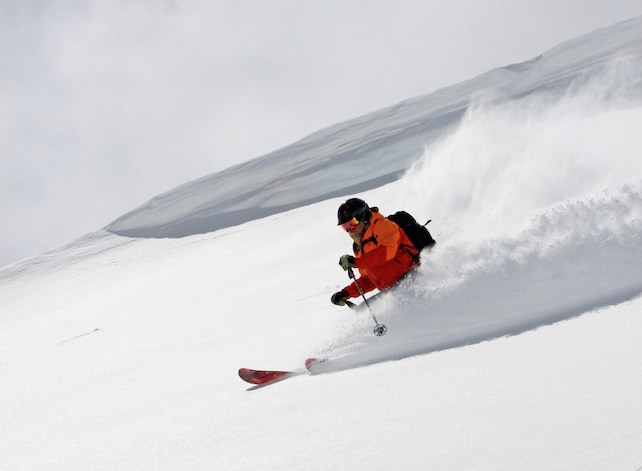 Professor Adrian Wilson, a leading knee surgeon and specialist based in Hampshire in the UK, advises anyone who skis to make sure they do careful prehab.

Skiing is an addictive sport, whether you ski competitively or just enjoy a a week’s holiday in the Alps or elsewhere each winter.

Skiers and snowboarders know the enjoyment that being on the slopes brings them and most are aware of one of the downsides – the chance of knee injury. This risk is particularly high in novice skiers and in people who ski without proper preparation.

Skiing is hard on the legs and if your quadriceps muscles and hamstrings are not as strong as they might be, you could be at 30 times the risk of sustaining a knee injury.

In the late autumn, gyms usually run spin classes and other activities for skiers who want to tone up their legs and get into condition for the ski season. However, with increasingly busy lives, many people looking forward to a skiing holiday can’t commit the time to the regular exercise sessions that are necessary.

Muscle Stimulation Could Be The Answer

One novel alternative is to use electronic muscle stimulation. I recommend the Empi Phoenix system to my patients before surgery to make sure their leg muscles are strong. The same technology can be used in healthy people who just want to prepare for skiing using the Compex range of muscle stimulators.

The system is really easy to use and you will be given help to fit the leg pads and advice on which programme to use. The device delivers small electrical impulses through the skin and into the muscle, causing it to contract and relax, just as it does when you exercise.

Muscle stimulation can be used in any situation where you are sedentary – sitting at your desk working, travelling, or watching TV in the evenings. It is a very convenient and time-effective way to strengthen the quadriceps muscles and the other muscles around the knee joint. It can be used instead of gym sessions or as a supplement to the gym sessions you can fit in, as well as with your day-to-day walking and stair climbing.

Investing in a Muscle Stimulator

Many skiers are now looking at investing in a Compex as it will carry them through several ski seasons. Some skiers buy two systems, so that they can use one on each leg simultaneously for maximum convenience. But there is no reason you cannot alternate the muscle stimulations sessions from one leg to the other. You just need to make sure that each leg has the same level of stimulation – for obvious reasons. 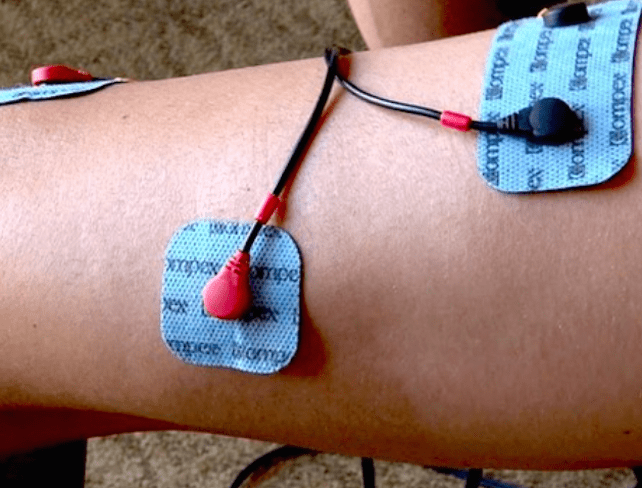 The Patient’s View – After Injury

One of the editors at Welove2ski, Felice Hardy, ruptured the anterior cruciate ligament (ACL) skiing in mid-March 2014, with reconstruction surgery in early April. It was her second ACL operation to the same knee within a ten-year period.

I started regular physio and hydrotherapy a few weeks after the operation and found that it helped with getting my knee bending and also for my balance. However, I was told that I’d have to miss out on skiing for the whole of the coming season as a hamstring graft – second time around – wouldn’t be fully healed for a year after the operation.

No way was I prepared to accept that! Missing out on a whole ski season was not something I was prepared to contemplate. But although I was having twice-weekly physio sessions, I became more and more frustrated because I just wasn’t building up my quad muscles fast enough.

So in September (six months after the accident) my surgeon recommended trying Compex electrostimulation. At first it seemed like a mass of wiring with a seemingly unnecessary 19 different programmes on the SP2 version (40 on the top-of-the-range wireless SP8) that I’d never be able to use successfully. After a couple of days I got the hang of it and began using it twice daily from then on.

By November my leg felt so much stronger. By Christmas (nine months after the accident) I was ready for skiing, and I’ve kept on using the Compex ever since, with my knee going from strength to strength – literally. I fact, my bad knee is now just as strong as the good one.

By March, a year after my accident, instead of getting ready for my first time back on snow, I’d progressed from gentle piste skiing to being able to handle moguls and varied off-piste conditions.

I now use the muscle stimulator after cycling in summer as well as after skiing – it promotes blood flow to the area when cooling down and helps to expend lactic acid from the muscles. 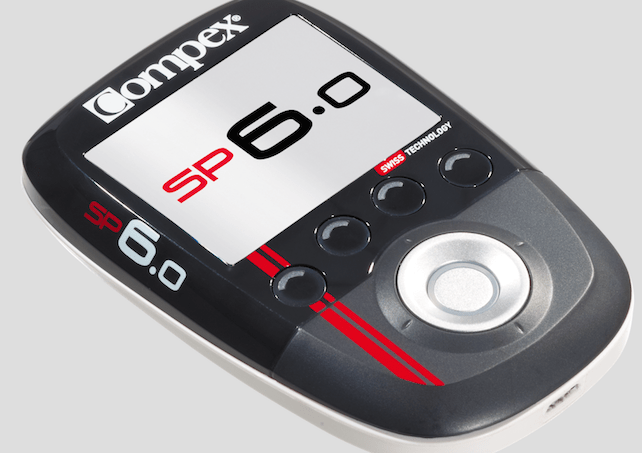 Another Welove2ski editor, Peter Hardy, has skied for more years than he care to admit. Put it this way, he started on snow as a child when boots had laces and skis were long and thin.

A get-out-of-gym-free card? Surprisingly for a sceptic like me, I didn’t need a lot of convincing that sticking electrodes on my legs from September onwards could act as a kind of painless substitute for hill walking during the build-up to the ski season. I should point out that I don’t do hill walking, so I was hardly in a position to judge.

Away from the snow, I admit I haven’t – until now – been taking enough exercise. The reason for this was a combination of ancient injury and pure laziness. A doctor advised me 20 years ago to treat my knees like a classic car – only take them out when the sun was shining and avoid steep gradients. Largely I ignored him, but it gave me an excuse to avoid exerting myself except when essential.

So when I start each ski season, I normally rely on muscle memory to see me few the first couple of painful weeks while my muscles work their way back into shape. It’s an uncomfortable business. Then last autumn someone suggested trying Compex electrostimulator.

“So, if I stick these pads on my legs for 25 minutes a day several times a week, how often do I need to go to the gym?” I asked the sales rep as he explained the working of this magic box.

“For your leg muscles, forget the gym,” he replied, “This is a far better, more effective exercise for an older guy like you than doing squats.” That was all the convincing I needed.

To my utter amazement, just as Mr Compex promised, my return to skiing two months later was startlingly different. At the end of my first long day’s skiing in Tignes I felt ten years younger. Rather than crying out in pain, my muscles were crying out for more. It really was a remarkable transformation from the initial stiffness I normally have at the start of the season.

However, the change didn’t come about overnight. Like a lot of things in life, you’ve got to work at it. But what I like is that it only lasts 20 minutes and you don’t actually have to work hard at all. And you can read a book or watch TV at the same time.

Here’s a promotional video showing how the wireless version works.

But firstly, you have to understand that Compex is NOT a substitute for all exercise. It is cardio-vascular element is zero. Your leg muscles, but not your heart muscle, are getting a work out. At the end of the day, you’re still a couch potato – but a different shaped potato.

However, for me, the surprising consequence was that my new muscles made me get off my butt. Slowly over a period of months I felt energised to the extend that I now find myself wanting – if I’m not skiing – to get out on my road bike most days.

I started with my quads. You put four electrodes on each leg and choose a rehabilitation programme. Turn up the juice to a level that is on the edge of uncomfortable but perfectly bearable, sit back and watch the show.

For 20+ minutes your muscles jump around all on their own. At the end, there’s a three-minute chilling-down period, and then you can move the electrodes to other muscles and start over.

The Compex physio suggests 2 x 20-minute sessions daily and recommends switching to a tougher resistance programme a couple of times a week. But after a short time I graduated to a stronger muscle-building programme.

If you’ve ever fractured a limb you’ll know that muscle tone drains away before your eyes in just a few days. Compex is used on coma patients. When they regain consciousness days or weeks later they are astonished to find that their muscles are, in some cases, in better shape than before their injury!

Within the first fortnight I made visual progress and I found a fresh spring in my step when I walked the dogs. The use of the gadget is by no means confined to legs. I experimented with chest and stomach muscles.

No, I haven’t unearthed a six-pack buried beneath middle-aged spread. But I think it’s largely thanks to the initial influence of this little box that my embryo beer gut has done a runner and my belt is two notches tighter. The moobies? Well, they’re a work in progress.

Insurance After An Injury

These days, there’s an ageing and more active population – due to the advancements in medicine and technology. This has led to people with pre-existing medical conditions becoming more active, especially in winter sports, where insurance would not have been available in the past.

Ski insurance specialists MPI Brokers cover on and off piste – with or without a guide – and ski racing. They have an age limit of 100 and deem a pre-existing medical condition to be something that has happened in the last 12 months. If a condition is controlled and nothing has changed in the last 12 months there will be cover. The Standard and Excel polices provide some physiotherapy when back in the UK, if the doctor has prescribed it. Maximum trip durations on a Multi Trip policy is up to 62 days.

Travel Addict Insurance Pre-Existing Medical Winter Sports Insurance has no age limits, and covers people with pre-existing medical conditions – including those who are terminally ill or have long-term disabilities. Their medical policy also provides aftercare such as physiotherapy. Pre-Existing Medical annual policies have a maximum trip duration of 45 days with the premium level of cover. Quote code ‘Welove2ski’ for a 10% discount.

See also our features on getting fit for skiing, ski safety, Knee Pain that Won’t Go Away, Why Knee Surgeons Love Skiing, and Is It Possible to Get Ski Fit Quickly?

Do you have any of your own tips for muscle-building and recovery after a hard day on the slopes? If so, please share them with us in the comments box below.

Professor Adrian Wilson MBBS, Bsc (Hons), FRCS, FRCS Tr & Orth a world-leading Knee and Sports Injury Specialist practicing in Harley Street, Basingstoke and Windsor. He has particular expertise in all aspects of soft tissue and reconstructive knee surgery and has pioneered techniques to improve treatment for sports injuries to the knee in adults and children.