How quickly things can change. Two weeks ago, our Snow Report came frosted with fresh snow – thanks to a half-metre dump in the Andes, and fresh snow in south-eastern Australia. This time round, winter appears to have stalled in the Southern Hemisphere. Over the last seven days, sunshine, mild temperatures and even spring skiing conditions have been the norm.

New Zealand has the worst of it at the moment – thanks to strong, mild north-westerly winds which have brought heavy rain and flooding to parts of the country. As a result, cover has been thinning on the trails in some ski areas – and off-piste routes are tough going.

In The Remarkables, for example, the snow depth on the lower trails is down to 30cm. Off-piste, the resort’s snow report counsels caution, “as it will be firm at first then soften during the morning…Please ski/ride with care as unmarked hazards exist.” However, there has been a dusting of fresh snow today, and more snow showers are forecast, so hopefully the weather has turned a corner. 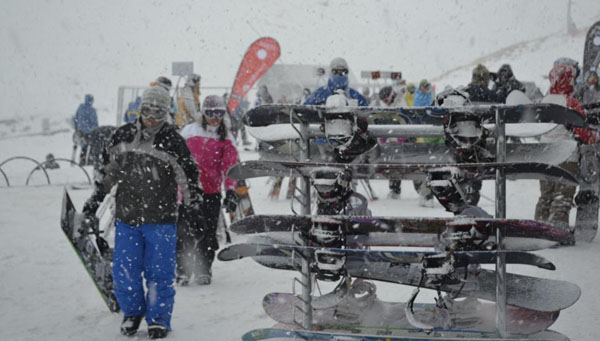 Conditions have been better in the Snowy Mountains of Australia. Perisher reported a 5cm dusting of fresh snow on the slopes this morning in Perisher – and an settled snow depth of 92cm. However, the cover has been subject to a freeze-thaw cycle lately, so it’s firm in the mornings and soft after lunch.

Over in the Andes, it’s been a sunny and dry week. Cover is still good, thanks to heavy snow a fortnight ago: on piste, Portillo in Chile reports cover 45-96cm deep. But there’s been no fresh snow for a week now. Most of the big South American resorts are concentrated around Santiago in Chile – and the weather there is likely to be sunny for the rest of the week, with the chance of a return to wintry weather on Saturday. Further south, in Bariloche, there’s likely to be fresh snow sooner than that – on Wednesday night. 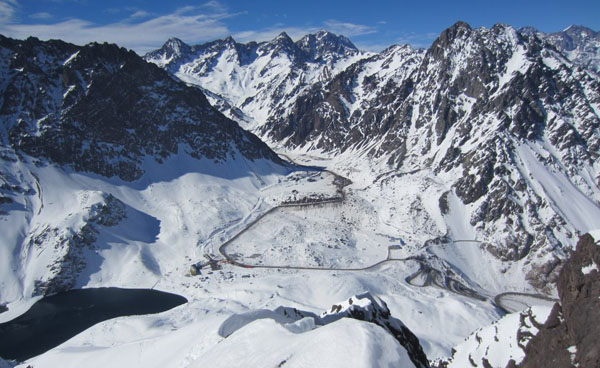 Meanwhile, just in case you’ve forgotten what a powder day looks like – here’s a rather tasty video shot by First Ascent in the Argentinia resort of Las Lenas last winter.

Finally, back in the Alps, the summer ski season on the glaciers continues. Up on the Hintertux glacier in Austria, there’s a dusting of fresh snow today and the temperature is well below freezing. But generally, the summer season has been characterised by mild weather and snow-gobbling rain. You can see from the picture, below, taken in Les Deux Alpes this morning, how hard the grooming teams are having to work to maintain the cover. Check out how scraped the snow is looking on either side of the piste… 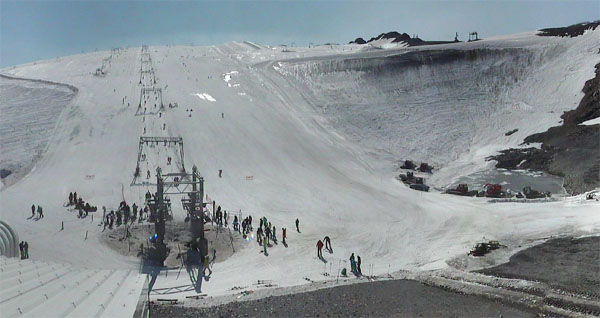 Cover this good doesn’t come easily in high summer – even on a glacier. Photo: © www.les2alpes.com.

For advice on where to make your turns this summer, check out our guide to the best summer skiing resorts.

One Response to “Snow Report, July 16”