A Balmy Weekend, Followed by Snow At Altitude

After last weekend’s cold snap in the Alps, we’ve swung back to spring – and today has been brilliantly sunny right across the region – as you’ll see from this webcam shot of Tignes, taken this afternoon. The daytime freezing point has risen sharply too, and today it broke the 3000m barrier, which means the snow’s been affected at the top of all but the very highest resorts.

The next couple of days will be even warmer in places, with clear skies expected for most of the weekend.

The good news is that the snowpack is settling rapidly in the heat, and whenever skies clear there will be some classic spring-skiing conditions to enjoy, both on-piste and off. What’s more, at the end of one of snowiest seasons in recent memory, the cover is still deep, especially in the French and Swiss Alps. So skiers won’t be skidding to avoid exposed rocks or bare patches of earth.

However, on lower pistes, especially those which get a lot of sun, it will be very slushy – so it’s best to ski above 2300m whenever you can. Off-pisters will have to be cautious too: spontaneous avalanches of wet snow are a feature of warm spring weather in the backcountry. A guide is a necessity – not only to keep you safe, but also to lead you to the best snow. With the quality of the cover changing hour by hour on many slopes, it takes a real expert to wring a good day’s off-piste skiing from the conditions.

After the weekend, the weather’s likely to be cooler and messier, with the Italian Alps in particular seeing plenty of rain at lower altitudes and snow higher up. The freezing point will also start to drop down towards the 2000m mark for a time. The northern Alps will be drier, but even here we can expect changeable conditions. Certainly, for the first three days of next week we’re unlikely to see weather that matches the blazing sunshine of today.

Here’s how it looked this afternoon at mid-mountain level in Cervinia. Here the snow is an impressive 205-400cm deep. 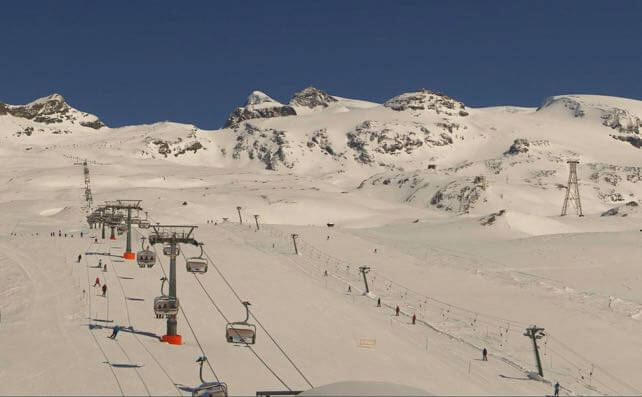 And this was the scene at the top of Solden in the the Tirol, in Austria, where the cover is up to 322cm deep, on-piste. 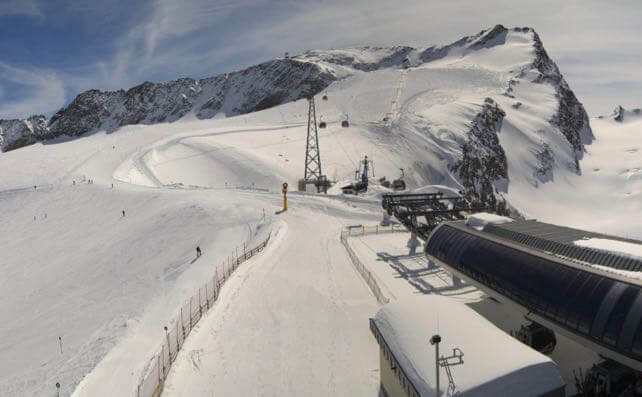 Fancy one last blast before the lifts stop spinning? Then check out our guide to the best resorts for spring skiing.

No Responses to “A Balmy Weekend, Followed by Snow At Altitude”