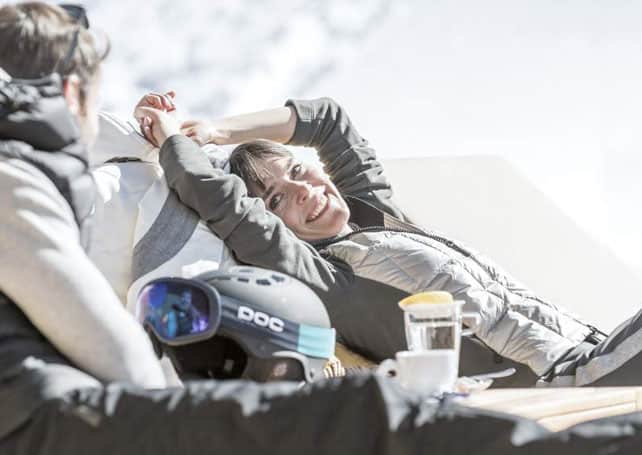 Considering a spring skiing trip? No wonder. With the days lengthening, and school-holiday prices lower than at their half-term peak, it can be a lovely time for a dose of snow.

Just be sure to build some altitude into your plans. Yes, there’s always the chance the wind will swing round to the north or east, and the mountains will get a miraculous dump of late-season powder. But there’s a higher probability of brilliant sunshine and balmy temperatures. In the Alps, you want to be skiing well above 2,000m when that happens: otherwise, you’ll find yourself wallowing in a slushpit.

Looking for a bit of Tirolean charm along with snowsure pistes for spring skiing? Then Obergurgl is your target. Set high in the Otztal, close to the Italian border, the snow sure resort (linked by cable-car with even higher Hochgurgl) has long been a favourite with those for whom the quality of the accommodation is as important as what’s on the slopes.

You won’t find many knockabout mid-market chalets or cheap high-rise apartments here: this is one of the bastions of four-star hotel-keeping, and prices reflect the emphasis on comfort, service and amenities.

The ski area isn’t huge, but it is very high by Austrian standards, rising to 3000m. What’s more, there’s glacier skiing in the neighbouring resort of Solden. Combine the two, with a little old-school apres-ski at 5pm, and some downtime in your hotel’s spa, and you’ve got the makings of a thoroughly relaxing break. 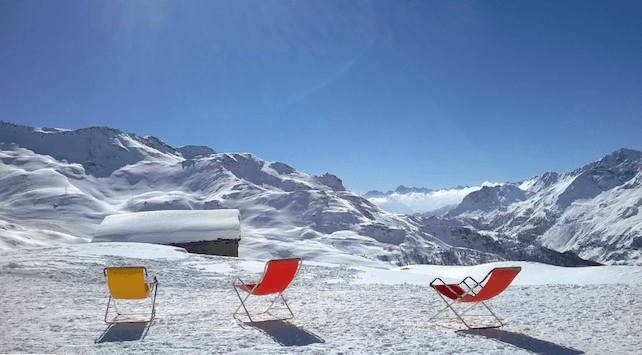 One of the funniest things we ever saw in a ski resort was a bunch of Italians sunbathing half-way up the mountain in Cervinia, with kitchen foil underneath their chins to double their exposure. As if there isn’t enough UV to up there in April to wrinkle you up like a raisin.

Still, they had at least picked a dramatic spot in which to fry themselves. Cervinia sits on the southern side of the Matterhorn (in Italian, Monte Cervino), just across the border from Zermatt, and here the famous mountain is not so much elegant (as it appears in Switzerland) as muscular and intimidating. On a clear day it has a mesmerising effect.

By contrast, the spring skiing is rather tranquil. Cervinia’s lift system occupies a big, flattish, west-facing bowl, which rolls from a high ridge at 3500m, down to the resort at about 2000m. The pistes, which snake across its surface are wide, forgiving and – for the most part – rather dull. But they do hold onto their snow very well for spring skiing, and one of them is a classic: Red 7 – a fast, swooping, run, which is five miles long and drops through 1430m into Cervinia. When the higher lifts are open you can ski over into Zermatt, too. 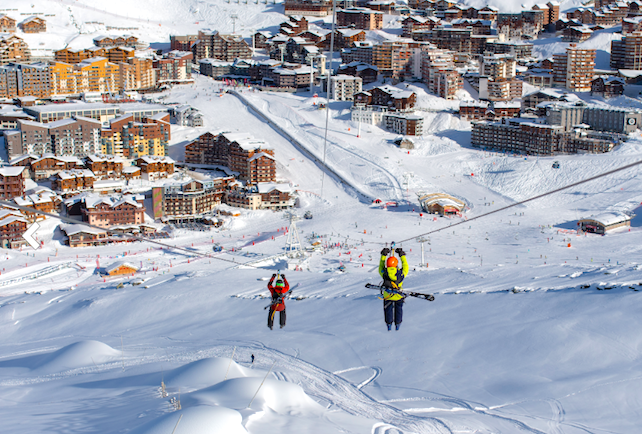 Set at 2300m, Val Thorens is Europe’s highest ski village. Above it, the lifts rise to 3200m, and serve a range of classic, easy-skiing pistes – notably the Combe de Caron and the Col de l’Audzin off the Cime de Caron. Up here, on shaded, north-facing slopes, you’ll still find wintry snow when most of the Three Valleys has turned into a slushpit.

If the cover is still good, you can also ski over to the head of the Meribel-Mottaret valley, to tackle the shady slopes of the Mont Vallon and Cote Brune, or over to the high slopes above Orelle, or down to Les Menuires, which is home to the Pointe de la Masse: all three are pretty snowsure and are home to some scintillating runs. 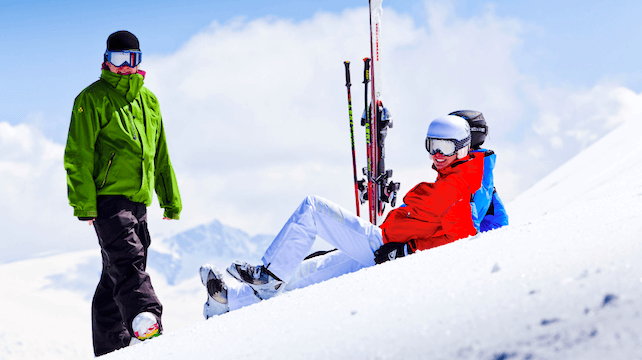 Thanks to Snowbombing – a six-day celebration of clubbing and ‘mad for it’ culture, set in Mayrhofen – the Zillertal has become Party Central for late-season skiers. But for those who care about their snow as much as their Jaegerbombs, this long, deep valley has another draw: the Hintertux glacier, which dominates the southern end.

Rising to 3250m, it offers some of the best glacier-based pistes in the Alps; steep and sustained, and about as snowsure as you can get. Admittedly there’s not enough here to keep a group of keen skiers interested for a whole week, unless they sign up for an end-of-season ski camp from the likes of British ski school Snoworks. Which is why we’d suggest it as a short-break destination. But if weather does turn cold and snowy, then suddenly the game changes, thanks to the all the other skiing on offer along valley.

The sheer variety of terrain is mind-boggling, and quite a lot of it is beneath the treeline. So if low cloud means you can’t see your hand in front of your face on the glacier, day trip up and down the Zillertal instead, visiting the Hochfugen, Hochzillertal or Penken ski areas.

Val d’Isere – A Great Atmosphere as the Season Winds Down 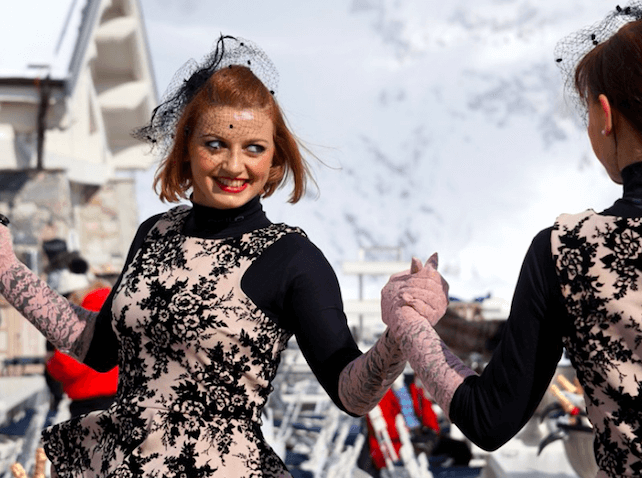 Val d’Isere shares its ski area with Tignes, and in many ways the latter is the better late-season destination. After all, it’s higher, and closer to the Grande Motte glacier. It has gentler home runs as well, for a more relaxing return to base at the end of a spring-skiing day.

But that hasn’t stopped Val becoming the main gathering ground for the British ski industry in late April. When there are no more holidays to be sold, this where the management of many tour operators and travel agents end up, hunting out grippy snow in the north-facing bowls above Le Laisinant and Le Fornet, and praying for a late-season dump.

There’s a good chance they’ll get one, too: Val d’Isere sits at the intersection between two weather systems, and usually benefits from storms coming in from either the Atlantic and the Gulf of Genoa in the Med.

Tignes – There’s More to Late-Season Skiing than the Glacier 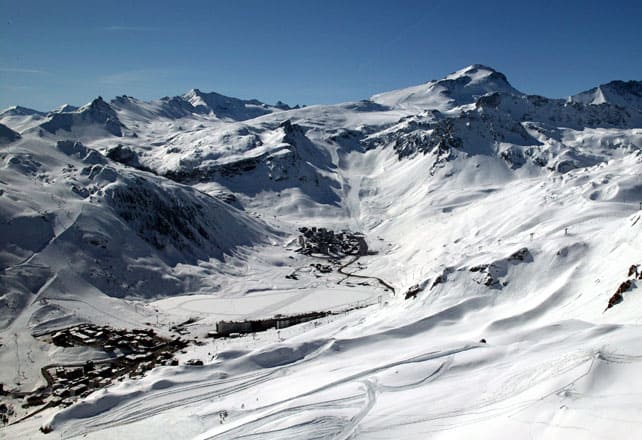 Yes, yes – by Alpine standards, Tignes is about as high as they come. Set at 2100m, its two main accommodation centres are served by a ski area which rises to a lofty 3450m. As a result, few resorts can match it for spring skiing and the late-season snow quality.

But it’s not just the numbers that are impressive. Nor the fact that Tignes is home to the Grande Motte Glacier, which is reasonably steep by Alpine standards and snowsure enough to offer skiing in July.

What really distinguishes this place as a spring ski destination is the extent and variety of the skiing below the glacier. The resort is set in a wide, U-shaped bowl which runs from south to north, and offers slopes which face almost every point of the compass. That means you can kick off your morning on something east-facing, just as the sun hits it and begins to soften the snow: and then move on as the sun does, following its warmth around the ski area.

If it gets too hot, you can then take refuge on the great north-facing wall at the head of the valley. Here you’ll find the off-piste playgrounds of the Grande and Petite Balmes (which should only be skied with a guide), the long, fast ‘Double M’ piste, and the area known as ‘Le Spot’ beneath the Col des Ves chair. You’ll be skiing them long after everyone else has kicked off their sodden boots and taken refuge on a deckchair.

Zermatt, Switzerland – Lie Back and Enjoy the Sunshine 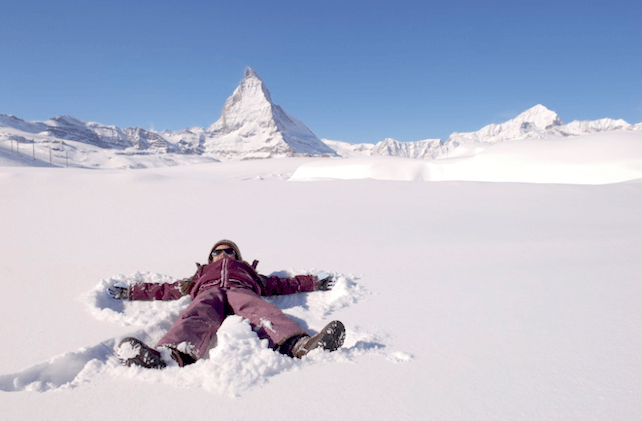 Zermatt’s glacier is one of the most snowsure in the Alps, and if they weather’s good you can also ski over into high-altitude Cervinia for a crack at ‘Red 7’ – one of the finest intermediate pistes in the Alps. Off-piste, there are some classic routes here too – notably the day-long descent from the top of the Monterosa – for those with the budget for a guide and a lift on a helicopter.

However, for most skiers of middling ability, the spring scene in Zermatt is as much about atmosphere as high-altitude skiing. Yes, there may well be powder up at 3400m, but when the valley below is drenched in balmy sunshine, the call of restaurants like Chez Vrony or Blatten is often stronger.

These days, Zermatt has another string to its late season snow – Zermatt Unplugged. In recent years, it’s grown into the best music festival in the Alps: and acoustic-only shindig, that is drawing in some very big names. In 2016, James Morrison was among the headliners. In 2017 they included Nelly Furtado, Jess Glynne and Paolu Nutini.

Ischgl – The Best Closing Party in the Alps 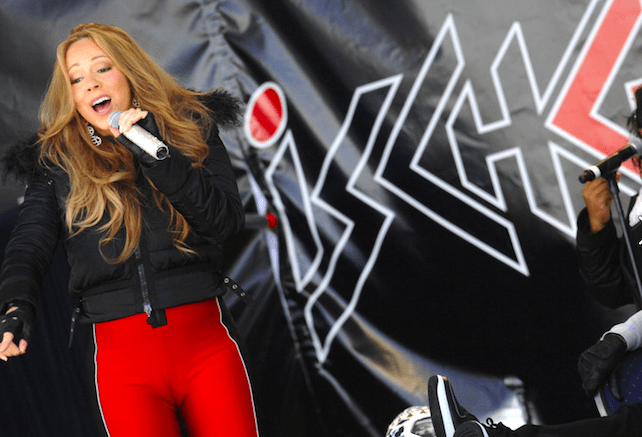 Almost all of Ischgl’s pistes are set on a high Alpine crown of peaks and plateaux, between 2000 and 2800m. Many of the slopes face north-west and hold their snow well. Provided you take the gondola down the mountain each day to avoid the lower valley runs, you should have decent skiing right up until the end of the season.

But that’s not really the point. You don’t come to Ischgl just to ski. The town’s good-natured nightlife is a big part of the attraction; and never more so than on the closing weekend at the end of April. Each year, the resort pays a fortune to bring in a headlining act for the party, and in the past have managed to sign The Killers, Kylie Minogue, James Blunt, Robbie Williams and countless other big names. Anyone who buys a special lift pass can go to the concert, too. 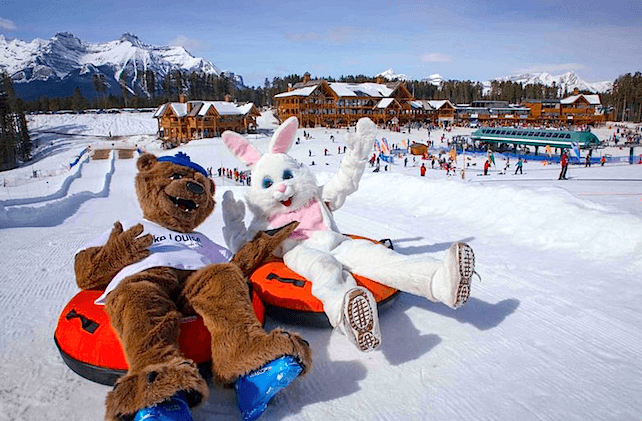 There is an alternative to going high-altitude in the Alps. You can target somewhere chilly instead. Lake Louise in Alberta is a small ski area by Alpine standards, and its climate is pretty dry when compared with the likes of Whistler, on the coast. But it is cold. Usually, when April temperatures are soaring further south in the Rockies – even in the high-altitude resorts of Colorado – they’re hovering around freezing at the base of the lifts here. Snow cover is usually good for spring skiing until the lifts shut at the end of April.

This isn’t a destination for hard-core off-piste skiers. There are some fast lines to be tracked through the back bowls, which face north-east and hold their snow very well. But the dryish climate means you’ll often be skiing moguls there rather than powder: and besides, the main offering here is wide and confidence-boosting trails, set between the trees.

Tuition is top-notch too. For anybody looking for an introduction to winter sports when it’s not strictly winter; or the chance to polish their on-piste technique on soft and crumbly snow, when elsewhere it’s mostly slush – then Lake Louise a good choice.

Thinking of going At Easter? See our Easter price comparison. Or even later? Check out our feature on summer skiing.