A Mad, Mild Spell of Weather in the Alps 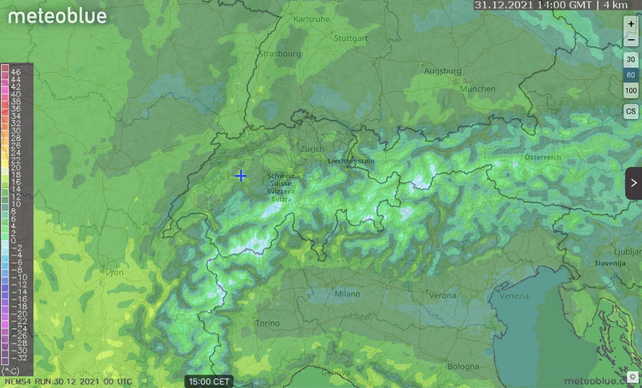 Meteoblue’s temperature chart for 3pm CET tomorrow. Only on the highest massifs will it be colder than 0C. Image: meteoblue.com

The start of the 2021-2 ski season has been anything but easy. But at least the Snow Gods have played their part – supplying those of us lucky and/or resourceful enough to make it out to the mountains with superb, early-season conditions.

Now, however, even the weather has turned against us – if only for five or six days.

The mildest spell of New Year weather I can remember has engulfed both the Alps and the Pyrenees. Yesterday evening and overnight there was rain across much of the western and northern Alps and today – once skies clear – the freezing point is going to be up around 3500m. It will rise on Friday and Saturday to around 3700m. In lower resorts such as Morzine, daytime highs will touch +11C.

It’ll be mild across the eastern and central Alps too, though it won’t be quite as warm as in the west. In Corvara, in the Italian Dolomites, the freezing point will be around 2700m today, with an afternoon high of +7C at resort level.

Normally, you’d expect temperatures like the ones in France over Easter, not New Year, and they’re going to affect the snow at every level of the ski areas.

Across much of the northern Alps, there will be a period of high avalanche risk too, with warning levels at 4/5 in France, Switzerland and Austria. This will steadily decrease as the snowpack humidifies, but there will also be a spell of wet-snow avalanches to follow on sunny slopes. Off-piste, conditions will be either dangerous or disappointing for several days.

Meanwhile, on-piste, there’s enough snow already on the ground to survive the onslaught – although skiers will probably find the odd bare patches developing on lower, sunnier slopes by the end of the holiday weekend. They’ll find stretches of proper spring-like slush too, as these runs are unlikely to refreeze overnight.

Fortunately, the forecast is for more wintry conditions from Monday, with Tuesday-Wednesday the most likely period for widespread snow, according to current forecasts. Here’s the 24hr forecast to 1pm on Wednesday January 5. 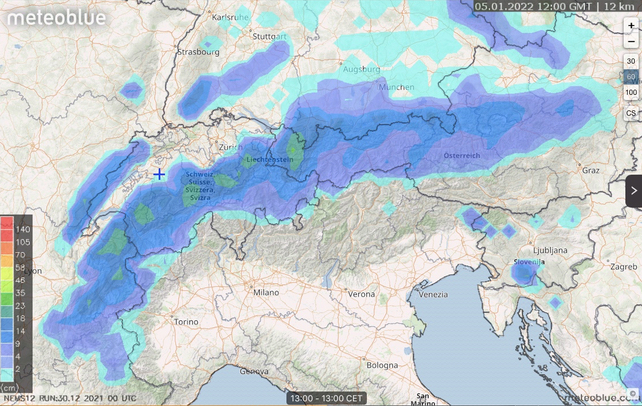 The mid-range forecasts suggest it may stay cool – but not frigid – after that, as well.

And as for the Covid forecast…

As far as Omicron goes, this seems to be the moment of truth, doesn’t it? The tidal wave of infections is beginning to break across the Alpine countries: and all eyes are on the UK to see how steeply our hospitalisation rate climbs now that the new variant is getting stuck into older and more vulnerable sections of our population. How it plays out here is going to influence thinking abroad.

If it doesn’t rise sharply then perhaps we can hope that restrictions on travel and skiing won’t be tightened much further. If the number of hospitalisations does rise sharply, then we’re in trouble.

But even writing that seems like a hopeless over-simplification. Some countries – notably Austria – are much less tolerant of high infection rates than others, and each is buffeted by different political winds. So we can’t expect tham all to react in the same way. They’re also likely to react with little warning, and with almost immediate effect. So expect the unexpected. If you’re travelling to the Alps in the near future check – on a daily basis – the entry requirements for your destination at gov.uk (and on the official national websites). Check the latest vaccine passport requirements once you’re inside the country too. Tour operator Crystal offers an online guide to both – here. But do cross-reference it with the official national guides as well, just be sure.

One final thing: look for travel insurance that offers Covid cover – ideally protecting you against illness abroad and cancellation at home if you get it here. Omicron may perhaps be milder than Delta but don’t underestimate its catchiness, and its potential to wreck your plans with a positive PCR or lateral flow test. I caught it from my kids over Christmas – just four weeks after my booster dose of vaccine, and despite all the usual precautions.

No Responses to “A Mad, Mild Spell of Weather in the Alps”