Fresh Snow and Low-ish Temperatures in the Alps 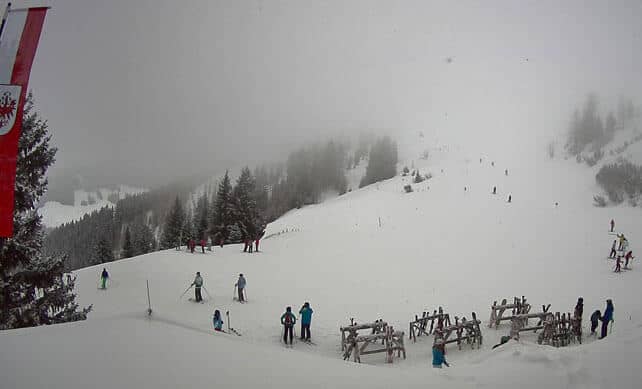 The odd snowflake in the air above Alpbach this morning. Photo: skijuwel.com

It’s a proper winter’s day in the Alps. There’s sunshine in the south, low cloud in the north – and, almost everywhere, good to excellent skiing conditions on piste.

We can thank a snowy first half of February for that – and in particular a sequence of snow storms over the last ten days which have brought the white stuff to both the northern and southern Alps. By the standards of this rather mild winter, temperatures have been low and stable for the most part, too.

The situation isn’t universally brilliant. It was rather mild on Saturday and there was rain on the lower slopes as a result, thinning the cover in the valleys. Up high in the north-western Alps, storm-force winds have also created plenty of densely-packed slabs of snow, which have bonded poorly with the cover underneath. So the avalanche risk is still very high: 4/5 across much of France this morning, and 3/5 in Switzerland and western Austria.

Meanwhile, in some Italian resorts, there still isn’t quite enough snow away from the groomed pistes to fill in the off-piste routes.

Still, it’s a great result given the season’s shaky start, and in the north-western Alps especially the cover at altitude is deep – thanks to another dose of heavy snow between Thursday night and Sunday which dumped a metre or more in places. The snow’s deep on the Austrian Arlberg too.

On the Grands Montets above Chamonix in France, for example, the settled snowpack is currently 310cm deep. On the other side of the valley, in the Flegere sector it’s not much shallower at 290cm. Meanwhile, on the Valluga in St Anton, Austria, there’s 260cm of settled snow.

There’s more snow in the forecast too. In fact, if you look at the picture of Alpbach, in Austria’s Ski Juwel ski area, at the start of this report, you’ll notice a few flakes swirling around today. The snow won’t be anywhere near as heavy as it was on Wednesday or Friday last week. But all the same, some areas could see more than 20cm of the white stuff tomorrow. Austria and the Italian Dolomites should get the best of it. 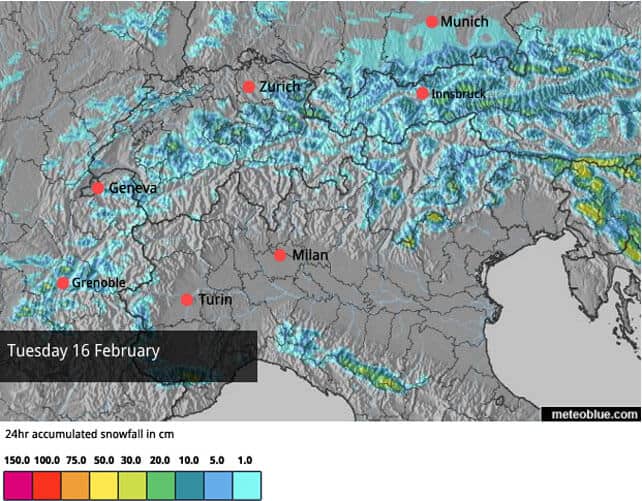 Welove2ski’s snow forecast for the Alps for February 16.

Looking beyond Wednesday, the mid-range forecasts can’t agree on the detail of what’s to come. But the general trend is towards more settled, milder and sunnier weather, which could become entrenched at the weekend.

Right, here’s a quick squizz at the webcams, starting with Soll in the Skiwelt. Here they’ve got the floodlights on today, and settled cover 55-60cm deep. 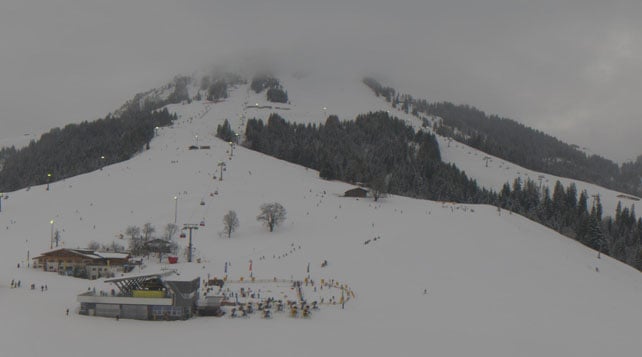 Meanwhile, pictured below are the slopes above Canazei in the Dolomites, where the snow is 60-95cm deep, on-piste. 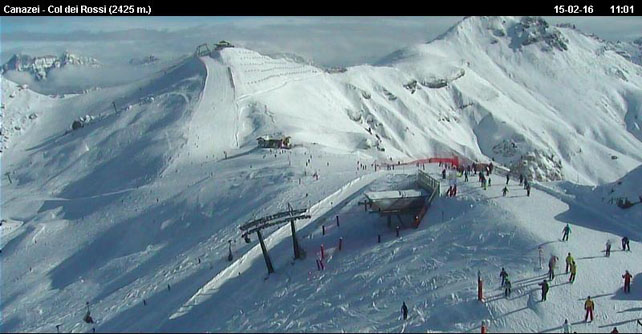 Below is how it’s looking above Madesimo, squirreled away in the mountains west of St Moritz. There was heavy snow here last week, and the settled cover is now around a metre deep. 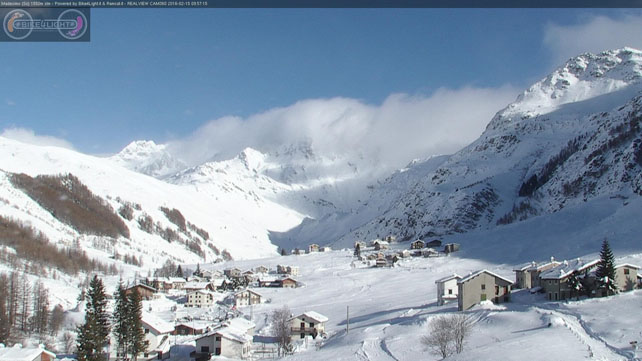 Pictured below is the view from the top of Mont Fort above Verbier, which shows how firmly low-cloud is clamped on the lower slopes. The snow here is 60-215cm deep, on-piste. 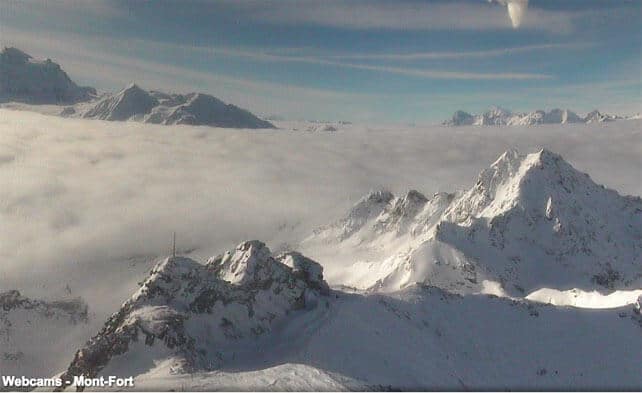 Below is the Croisette at Courchevel in the Three Valleys today: snow cover here is 146-198cm deep. 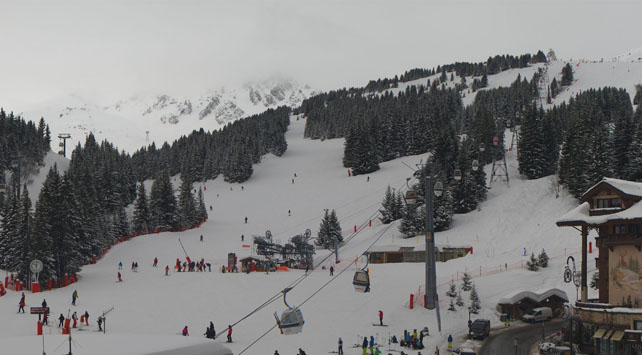 Below are the quiet slopes above Le Fornet in Val d’Isere. Cover here is 145-260cm deep. 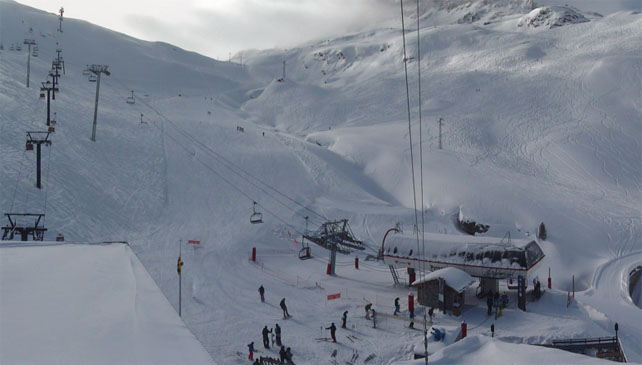 And this is Serre-Chevalier, south of Grenoble, where there’s 40-170cm of settled snow.

It’s also worth noting that conditions in the Pyrenees have improved after a mild spell at the beginning of the month. There were several snowfalls last week, then rain at the weekend, and now we’re back to snow. This photo was taken in Andorra’s Grandvalira ski area this morning. 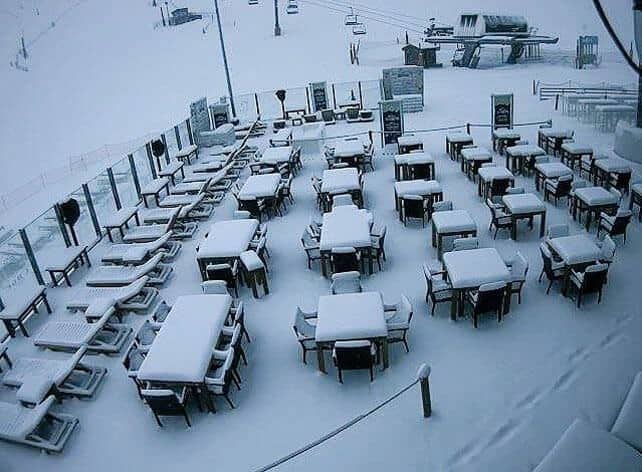 In the western US and Canada, the weather’s been mild of late, with sunshine in the southern resorts and mix of rain and snow further north in Canada.

However, this pattern was interrupted yesterday when heavier snow ventured south – Breckenridge in Colorado picked up 20cm yesterday evening, with more falling overnight.

This was the Breckenridge snow stake at 4.20am. 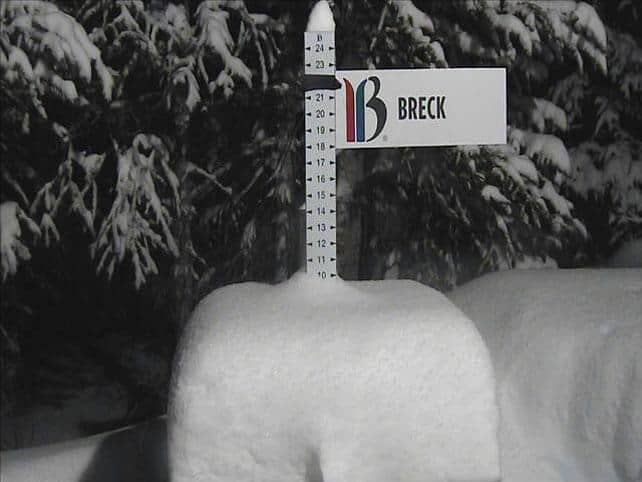 North of the border, Whistler is expecting heavy snow on the top half of its ski area this week – with rain on the lower slopes. Up to 60cm of the white stuff is expected by Thursday night.