8 Things We Love About The Dolomites 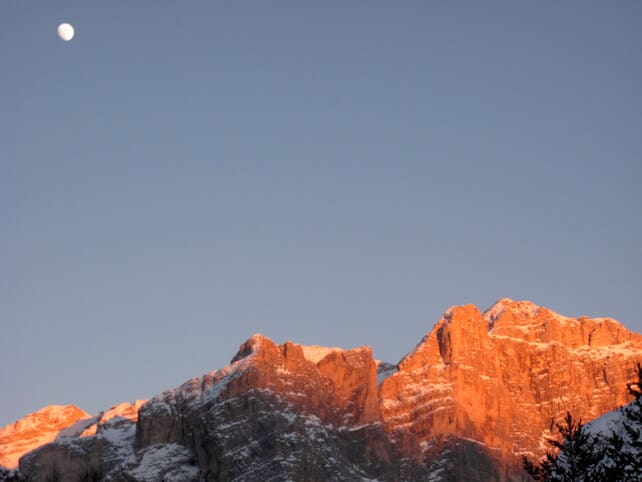 Sunset on The Dolomites. Photo: © Welove2ski.

This is skiing at its best for all standards in an area that would take a lifetime of ski holidays to fully explore – and during the 20013-14 season it had the deepest snow cover in Europe. One charming village leads to another by gondola, chair-lift and a network of runs. These give you the feeling of going somewhere each day, rather than repeating the same stretch of mountainside again and again.

You won’t be able to tear your eyes away from majestic rock faces of the Dolomites. If you were going to compare them with similar looking mountains it would have to be Monument Valley and the Grand Canyon in Arizona – all have oddly-shaped peaks and plateaux, and turn a brilliant rose hue at sunrise and sunset.

2. The endless trails of the Sella Ronda 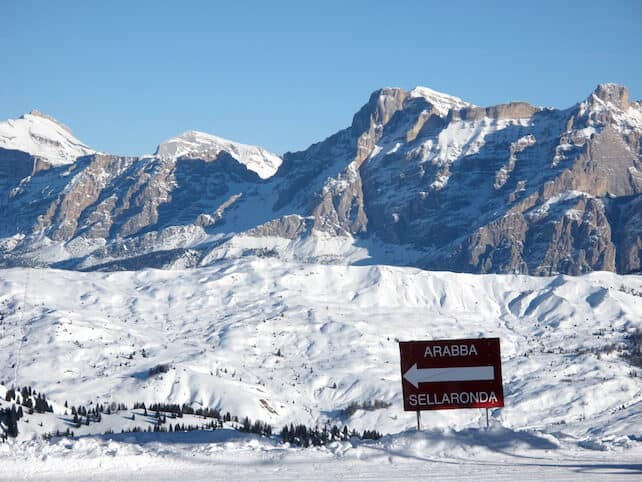 Italy’s most famous circuit – it can be skied in either direction and takes around four hours to complete – lies at the heart of a mighty 1220km of piste and 460 lifts included in the Dolomiti Superski lift pass. They’re scattered across a giant wedge of Italy to the north of Venice and south of the Brenner Pass that marks the frontier with Austria. In one day we completed a 120km and 20-lift circuit, but we barely scratched the surface of either the lift system or the quantity of groomed runs for all standards.

Most central places to stay are Arabba and Selva Gardena – the latter is also the most popular resort – particularly for families (Esprit Ski has chalets and childcare here). Set against the most attractive backdrop is Corvara, with Romantik Hotel La Perla containing the renowned Stüa de Michil restaurant. If you want to go straight to the steepest skiing each day then the best place to stay is in Canazei or up at Passo Pordoi.

The Sella Ronda lift system is continually upgraded with the region’s natural snow cover – big this season but not always so in recent years – backed up by an impressive investment in artificial snow-cannons. And if you want another view of the area, Dolomite Mountains now offers a Great War Ski Tour package over two days.

3. Our favourite hotel is in San Cassiano 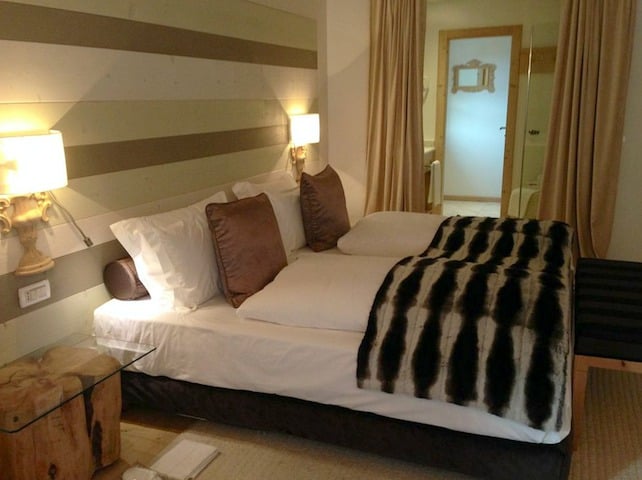 San Cassiano is situated a couple of lifts and runs away off the edge of the Sella Ronda. It’s a quiet little village and you don’t come here for the nightlife. Instead there’s the cocooning comfort of Hotel Rosa Alpina, one of the loveliest ski hotels in Europe. The cuisine, overseen by celebrated chef Norbert Niederkofler, is as fabulous as it is imaginative. But the hotel’s extraordinary success – guests come from as far away as Sao Paulo and Caracas – is mainly thanks to its charming owners Hugo and Ursula Pizzinini. Hugo is also the manager and is on hand day in, day out.

The bustling but attractive town of Cortina – the capital of the Dolomites – is Italy’s premier resort. Although it is more expensive than others in Italy, prices remain favourable in comparison with its counterparts in France and Switzerland. The town is centred around the main pedestrianised shopping street of Corso Italia and the Piazza Venezia with designer boutiques, antique shops and smart bars and restaurants.

The skiing is divided between two main areas, both of which can be reached on foot from most of the accommodation if you are prepared for a hearty hike. Lack of investment in modern lifts has lost Cortina much of its former international clientele over the past coupled of decades. This is a shame because the mountains here have a lot to offer. The two smaller areas of Cinque Torri and Passo Falzarego are also well worth a day’s skiing.

5…or the mini version: Ortisei

Five minutes’ drive along the valley from Selva Gardena lies Santa Cristina, and just beyond is the charming resort of Ortisei. Here a lovely main street, resembling a smaller version of Cortina d’Ampezzo, has a lively central square dotted with colourful buildings. The myriad shops sell everything from jewellery, books and fine art to local wines, dried meats, and carved wooden figurines. From here you can explore the Sella Ronda or the lesser-known Alpe di Siusi.

6. The huge vertical drop on the Marmolada 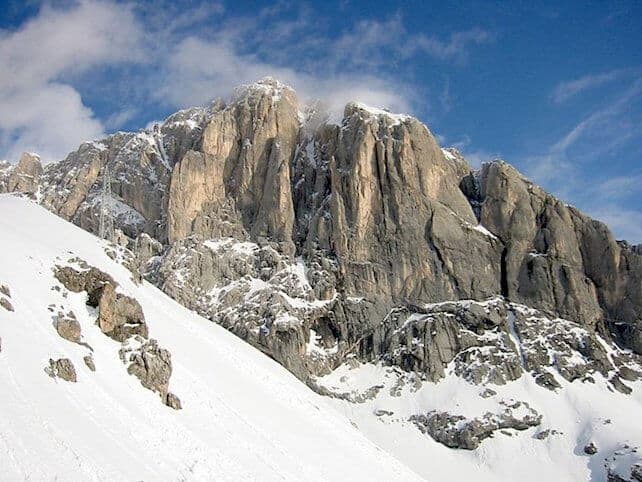 From Passo Padon in the Sella Ronda at 2370m there’s a long sweeping red run all the way down to the small village of Malga Ciapela at 1446m. This is the starting point for the cable-car up the Marmolada to the top at Punta Rocca at 3269m. From here there’s an even longer run, back down to Malga Ciapela – with a vertical drop of nearly 2000m.

Mountain huts abound. Our favourite is Rifugio Averau, at Cinque Torri, which has got to be one of the top mountain restaurants anywhere. Officially this ski area comes under Cortina d’Ampezzo but is also accessible by a bus link from Armentarola off the edge of the Sella Ronda.

Like all the other mountain eateries in the area, it’s excellent value. Spaghetti Bolognaise costs €7.50 and a glass of wine €3. House speciality is two (or three) home-made pasta dishes all on a single plate. Ravioli stuffed with with cheese, nuts, and tomato is one of them, Tagliolini with venison and truffles is another – and together they cost €12. If lunch goes on a bit you can always stay in a room here for €90 a night. 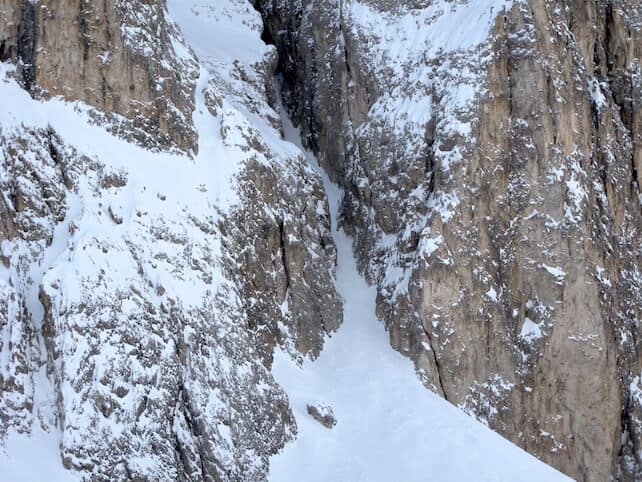 Most people think of the Dolomites, and in particular the Sella Ronda, as having mainly intermediate skiing. Yes, there are wide, flattering pistes and quite a bit of pole-ing to get from one place to another. But you’ll also find spectacular off-piste descents such as the Val di Mezdi and some of the steepest and narrowest couloirs in Europe – such as Canale Holzer.

From Malga Ciapela you can ski down the spectacular Serrai di Sottoguda – a narrow and steep-sided gorge cut between the two villages of Malga Ciapela and Sottoguda, and bordered with frozen waterfalls. The gorge is considered one of the wonders of the Veneto Alps, and while snowploughing along (it’s too narrow to do much else) you will see groups of ice-climbers making hair-raising ascents up frozen waterfalls.

Another not-to-be-missed view is of the bright turquoise waterfall of the Hidden Valley down from Lagazuoi and ending up in Armentarola. Those staying in Cortina will need to catch one of the regular buses back from here via Passo Falzarego. 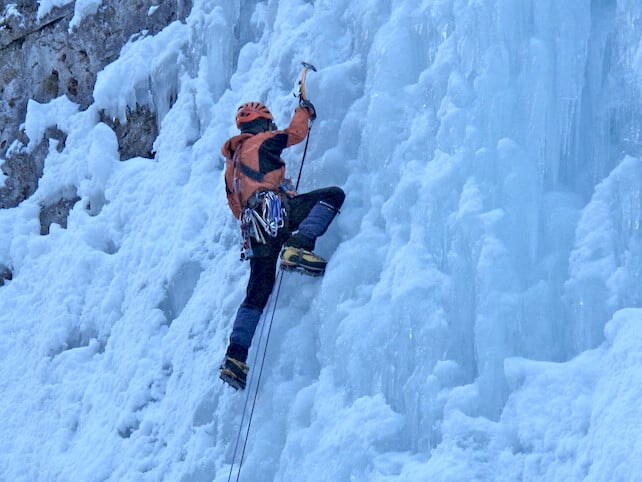 4 Responses to “8 Things We Love About The Dolomites”