A Cool and Snowy Start to the Week

Remember the end of last season? Heavy snow at the end of April turned conditions on their head, and a warm spring suddenly morphed into a powder party. The handful of skiers and boarders left in the resorts couldn’t believe their luck.

This year, we’re not expecting such a magnificent end to winter – but that said, there was snow at altitude yesterday, and more is in the forecast. Here’s tomorrow’s outlook. Welove2ski’s snow forecast for May 1.

In the western Alps, the wind is going to blow from the north-west tomorrow and the daytime freezing point won’t get above 2,000m. That’s the kind of level you’d expect in the early March. When it does snow, it’ll briefly settle down to 1600m.

In the east, the change in the weather won’t be so marked. In Austria, the freezing point will be somewhere close to 2500m.

After two weeks of sizzling weather in the Alps, it’s quite a change, and I hope enough white stuff falls in Val d’Isere, France to coat the pistes with soft, grippy snow – as tomorrow is the final day of “winter”. But that doesn’t mean they’re done with skiing yet. As you’ll have read in our recent article, some of the pistes in Val will be opening up again shortly for summer skiing on June 3. 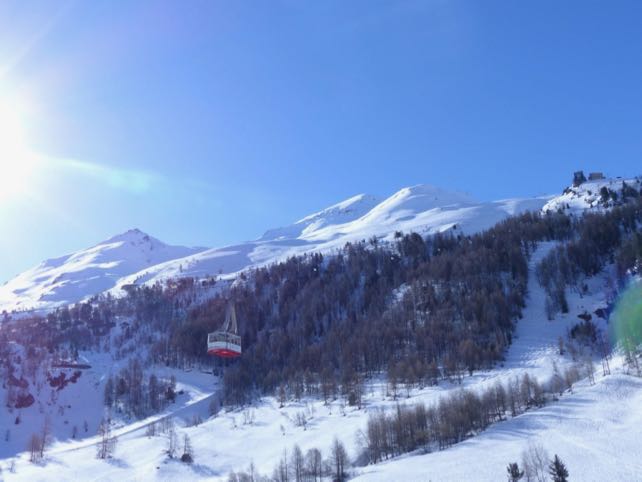 Meanwhile, several other high-altitude resorts are still running, including Tignes (closes May 6), Val Thorens (closes May 10) and Cervinia (open for weekend skiing throughout May). On top of this, you can still ski in several glacier ski areas. Hintertux and Zermatt are open all year, the Kauntertal closes on May 21 and the Stubai closes on June 3. Alongside Val d’Isere several resorts will be reopening for summer skiing on their highest pistes too.

So there’s no need to hang up your ski poles just yet. Here’s how the Stubai glacier looked this morning with a dusting of new snow. 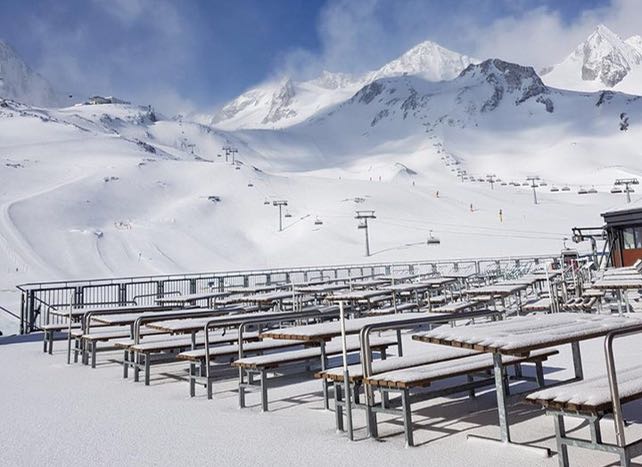 Despite all this talk of fresh snow and resorts that are still open, it’s worth pointing out that – generally speaking – the snow cover is now in retreat.

In the Tirol, today’s avalanche bulletin said that, “The unusually warm April has left its mark: the previous snow depths which were extraordinary are now below average. The snowpack largely consists of stable summertime corn snow on shady slopes up to 2400 m, on sunny slopes up to 3000m.” Meanwhile, in France, the snow is generally deeper, but even in the Tarentaise, MeteoFrance’s avalanche report has been noting the thinning cover in recent days. This process will slow over the next few days, but we can expect it to resume when warmer weather returns at the end of the week. 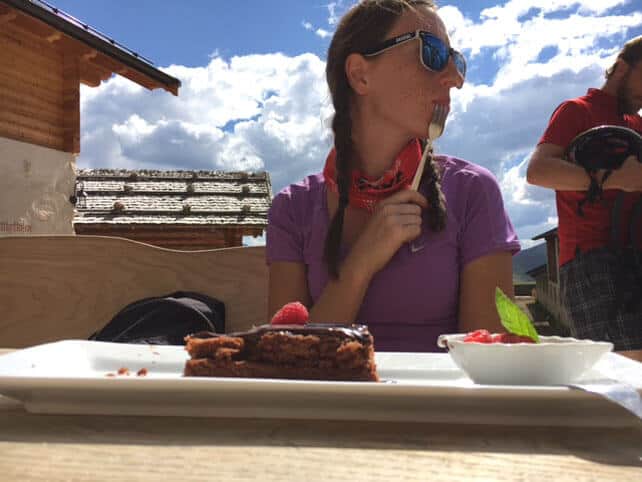 A slice of chocolate cake at the Malga Sasso Piato above Canazei in the Italian Dolomites. Photo: Welove2ski.com

One Response to “A Cool and Snowy Start to the Week”