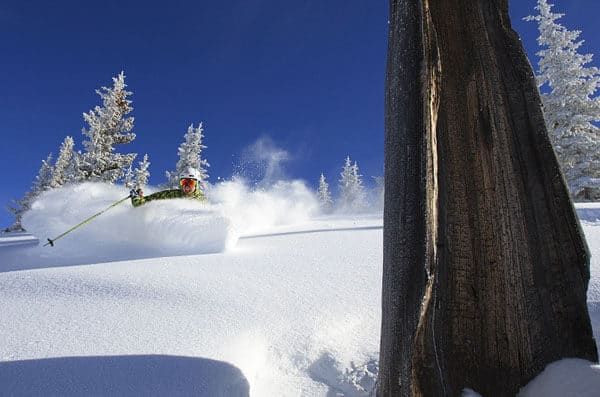 The Back Bowls of Vail. Photo: © Liam Doran

So there you are in your favourite ski resort, and the speed you’re skiing at is starting to scare you. You’re on reds and blacks mainly, and the only way to get your skiing buzz is tear down them at what feels like Mach3. “What next?” you wonder. “Do I just keep going – faster and faster – until I hit a chair-lift pylon at 100mph?”

No, of course you don’t. Instead, you stop trying to get your kicks on groomed snow, and start skiing off-piste. It’s not easy: you need a whole new armoury of skiing skills to tackle all the terrain the mountain is going to throw at you. It’s expensive too – ultimately, tuition, guides, fatter skis and avalanche safety gear will all be going on your shopping list.

But once you get the hang of it a whole new world of adventure will open up. It is, by turns, beautiful, duplicitous, frustrating, dangerous and completely addictive. Once you’ve experienced it, there’s no going back.

Where do you start? Right here of course – with our guide to the best resorts for off-piste skiing beginners. 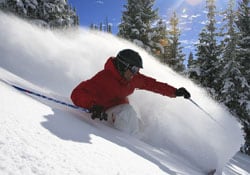 The best playground we know for off-piste beginners

For anyone new to off-piste skiing, North American resorts have one enormous advantage over their European rivals: they secure all terrain within their boundaries against avalanches, whether on-piste or off. As a result, you don’t need to hire a guide or buy/rent avalanche safety gear to enjoy them.

Vail has the best terrain for this kind of stress-free skiing – thanks to its celebrated Back Bowls. They face mostly south and west, which means you have to ski them mid-winter – because in the spring, the sun can quickly spoil their snow. But don’t let that put you off. On a cold, quiet, midweek morning, with a fresh coating of snow, there’s no better playground on which to nurture your off-piste skiing skills: not too steep, not too long, and almost unbroken by trees, or rock bands. Every slope ends in a lift, too, so there’s no hiking. You can ski laps until your legs explode. 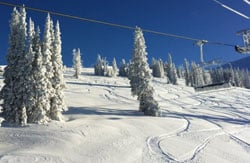 It’s small, it’s remote – and no-one goes there. But on a powder day the pocket-sized Wyoming resort of Grand Targhee is also heaven on earth for anyone starting his or her off-piste skiing career.

Why? Three reasons. First, it faces west and gets absolutely walloped by snow, as it blows in across the flatlands of Idaho. (Grand Targhee claims 500 inches/12.7m of the white stuff a season, which puts it into the superleague of snowy resorts.)

Second, there are no big cities nearby – and most of the skiers who do make it out here get side-tracked by Jackson Hole. Which means the place is all but deserted. Sometimes, it feels like you’re skiing in your own private resort.

Third, the pitch of the slopes is ideal if you’re an off-piste skiing beginner: not too flat to be boring, not too steep to be scary. A few scattered trees add some interest, if you feel like a bit of slalom: but mostly this is a point-and-go kind of place. Your confidence and fluency is all but guaranteed to soar. 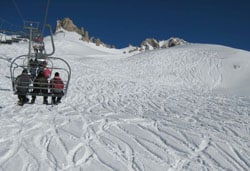 Lots of nibbly bits to practice on. Great instructors, too

There are 33,000 guest beds in Tignes – so you’d expect the powder to be gobbled up in an instant. But it never seems to work out like that.

Anyone who hires a guide or an off-piste instructor can still find untracked snow to play on, a couple of days after a fall – especially on the western side of the resort, away from the links with neighbouring Val d’Isere

There’s plenty of variety, too. Yes, there are hard-core descents aplenty. But you’ll also find plenty of short nibbly bits between the pistes, as well as mid-sized bowls to progress to after that. Generally, it’s a less intimidating environment than in Val d’Isere – and the resort does its bit to encourage the freeriding spirit with its “Naturides”. These are ungroomed ex-pistes which are waymarked and, crucially, protected against avalanches. They get skied out more quickly than other off-piste routes.

Standards of tuition are high. Snoworks is here for much of the season, running excellent all-terrain and off-piste courses – designed to break down rigid notions about posture and the shape of your turns, and introduce a more flexible, tactical approach. New Generation is another top-notch ski school with a base in the resort. 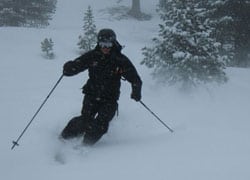 One of the most freeride-friendly resorts in the Alps

Hochfugen is what they call a schneeloch – a snowhole. Set in a small hanging valley to the west of the Zillertal, it seems to snag every passing storm and shake extra snow from its clouds.

It’s pretty varied too, with skiing both above and below the treeline – and best of all it has a freeride-friendly spirit. There are even information boards at the top of key off-piste lines, telling you what terrain is coming up next, and how difficult it is.

It’s a shame these lines are not protected against avalanches, as they are in North America or Tignes. But if you’re new to off-piste skiing that’s probably a good thing: because it’ll force you into the arms of the top-notch instructors at the local ski school Top Private. Spend a couple of days with one of them – exploring the big Alpine bowl at the top of the resort, or the rollercoaster tree runs lower down – and you should see big improvements in your technique. 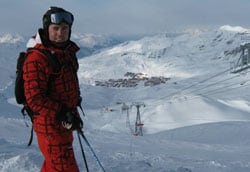 Val Thorens sits in a big, high mountain bowl at the western end of the 3 Valleys. Up top, the rim of the bowl is pretty steep in places, but lower down, there’s lots of rolling, easy terrain which is entirely treeless. Yes, that means you won’t be able to see a thing when the clouds come down – but when it’s sunny, you’ll find yourself in what is effectively one big nursery slope for off-piste skiing beginners.

The local branch of the ESF here is a good’un, too – international in outlook and not at all stuffy. So sign up for some off-piste lessons, and get your legs pumping. 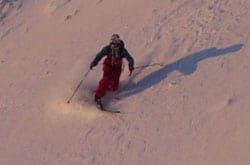 Time and space to make your turns. The guiding is refreshingly under-priced too.

Are, Sweden is dominated by a big, round-topped mountain called the Areskutan – and its upper slopes are a blissful place to practice your off-piste turns. There are hardly any trees or rocks to cramp your style, and the pitch is perfect for anyone building their confidence. Okay, so you won’t often find knee-deep powder up there: the snow in Sweden usually comes in 10cm top-ups, rather than one-foot dumps. But that suits most ordinary skiers just fine. There’s enough snow to keep things soft and pneumatic, but not so much that you’re exhausted after 20 turns.

You’ll need a guide to show you the way and keep you safe – and the good news is that here, off-piste guiding isn’t expensive, thanks to the resort’s Skistar Experience programme, which will introduce you to the terrain over the course of a half day (for two people it works out at around half the price of a private lesson in the Alps). The sessions cover other parts of the resort, too – notably the under-populated and forested slopes of Tegefjall, which is place to go when there’s fresh snow on the ground but the skies haven’t yet cleared. 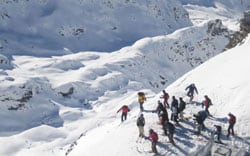 It’s the tuition that counts

For first time off-pisters, Verbier’s terrain is far from perfect: too steep, too busy, and too bumpy for anyone whose turns are a bit hesitant. What’s more, any powder that falls is gobbled up in an instant by the legion of freeride addicts who live in or near the resort, which means off-piste skiing for the unwary can quickly turn into mogul hell. On some of the more popular slopes the bumps can be the size of Volkswagen Beetles.

But – and this is a big but – the resort attracts some of the best instructors and guides in the Alps. Many spend their winters leading parties of experts – but at the Warren Smith Ski Academy they specialise re-engineering dodgy intermediate-level technique so it can tackle more varied terrain. The lessons can get a bit technical for some: Smith loves to burrow deep into the biomechanics of skiing, as you’ll see in this video clip below. But the classes are also friendly, relaxed and supportive, and most skiers find that if they stick with it for a whole week, their technique and confidence is transformed. Many rebook for another course when they’re done, too. 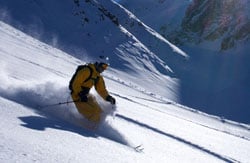 St Anton like Verbier, is a resort with an intimidating image, and some tough terrain to boot – notably on the north face of the Valluga, at the top of the ski area. But there are smoother slopes here too, especially on the other side of the valley in a sector known as Rendl. It’s here that the instructors of Piste to Powder usually take their less experienced off-pisters. However, despite the name, you will need to have had at least some experience of skiing off-piste with a guide and/or instructor before they take you on a course.

St Anton is also a stop on the winter tour of Snoworks which runs popular off-piste courses for powder virgins, cliff-hucking experts and everyone in between. Groups are graded according to ability and for first-timers they’re a better option than Piste to Powder’s more hard-core approach. 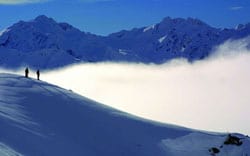 You want lots of snow to practice on? Then put Lech and Zurs on your hit-list. These two upmarket, old-money ski area resorts sit in a cold, rather bleak Schneeloch (snow hole) on the northern side of the Arlberg Pass in Austria – and their snowfall averages are amongst the highest in the Alps.

Lech gets around 7.3m a season at resort level, and Zurs more than 10m. The terrain isn’t as tough as it is in neighbouring St Anton (see above) – but then that’ll suit first-time off-piste skiers perfectly. So too the lack of competition for powder snow: many of its regulars prefer to cruise around on the groomed pistes, or while away their days in five-star hotels and mountain restaurants.

The best off-piste tuition in the area comes courtesy of the Alpin Center in Lech. Don’t even think of think of venturing into fresh powder without its guidance. 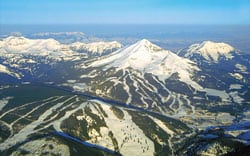 Hello? Is anyone at home?

Big Sky is best know for the singular spike of Lone Peak – one of the most distinctive resort mountains in North America, and home to some of its best steep skiing too. Lower down, however, the slopes are gentle and – midweek – practically empty. They’re so quiet you can often practice powder skiing without actually leaving the pistes.

A few seasons back Welove2ski spent a couple of hours creaming through deep snow on the trails of Andesite mountain without seeing any other tracks. Eventually, two other skiers showed up. And that was it, for an entire afternoon.

The only slight drawback is that it doesn’t snow as often much as it does in many resorts out west. The resort’s own figures record an average of 400 inches/10.16m a season, but bestsnow.net reckons 258 inches/6.55m. This probably reflects the discrepancy between snowfall on top of Lone Peak and at the base village. But by way of compensation, there’s very little competition, midweek, for fresh snow when it does fall.

5 Responses to “The Best Resorts for Off-Piste Skiing – Beginners”