Where to Play High Altitude Golf 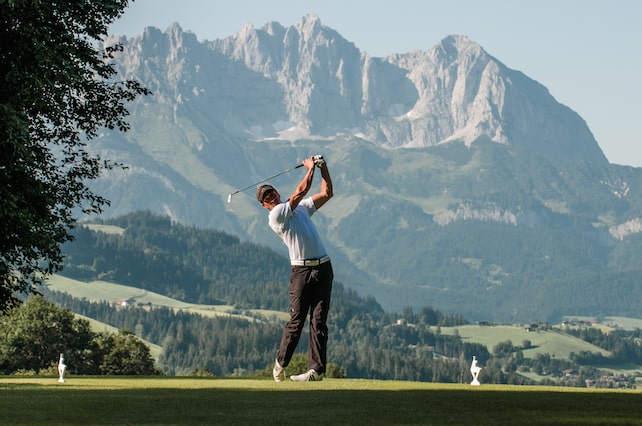 ‘Don’t raise your head’ is one of golf’s favourite mantras, but that’s not so easy when you’re surrounded by glorious snowcapped peaks. Golfers are most at ease in Scotland, but skiers who play golf are drawn to cropped Alpine pastures, whether or not they’re covered in the white stuff.

Playing during the skiing off-season at over 1000m creates welcome delusions of out-driving the pros, as balls travel titanic distances through the thin air. On generous fairways, this produces smug satisfaction, but that can as easily turn to nightmare when they funnel onto grassy mountain ledges. What benefit is a monster drive if you never see the ball again?

With such inhibitors in mind, here are six of the best in the Alps and one in Scotland. Inevitably the season is snow-dependent and green-keeping is notoriously difficult in the mountains, but courses should be open between May and October.

If you get lucky in the spring, you can ski the Grand Montets in the morning and play this handsome parkland course in the afternoon with time for a fine French lunch in the clubhouse in between. Views apart, there is nothing mountainous about the fairways laid out on the valley floor between Chamonix and Argentiere.

The first four holes were opened in 1934, but the ground-breaking American architect, Robert Trent Jones Senior, is responsible for the existing18-hole layout that was completed in 1982. The challenge is varied, with streams and stands of birch and fir, not to mention the turbulent Arve River which must be crossed on occasion. 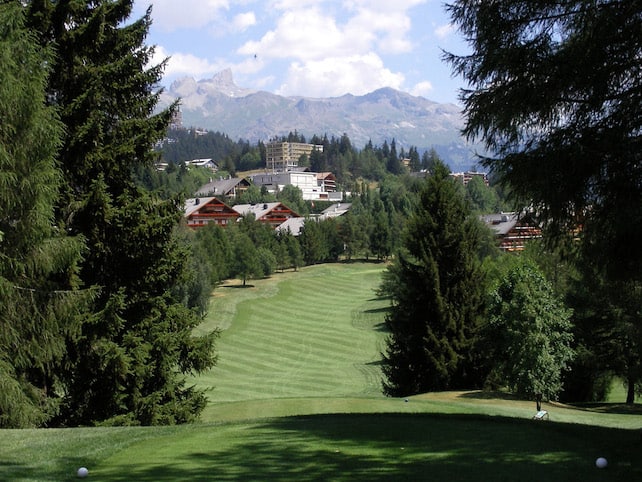 With views of both Mont Blanc and the Matterhorn, the home of the Omega European Masters can justify its claim to the most spectacular views in golf. History has it that the teenage Arnold Lunn was the first to spot the golf potential in the haut-plateau in Crans Montana in 1905, but the Valais course took its present form in the 1920s, with Seve Ballesteros adding the final tweaks in the mid 1990s.

It is a genuinely mountainous layout, tough to walk and tough to play in terms of selecting the right club to cope with the gradients. At 1500m, it is also one of the more elevated quality golf courses in the Alps. Holiday players may be amazed at how their balls take flight, but anyone interested in the real deal should watch the household names compete for a £1,800,000 purse from September 4-7. 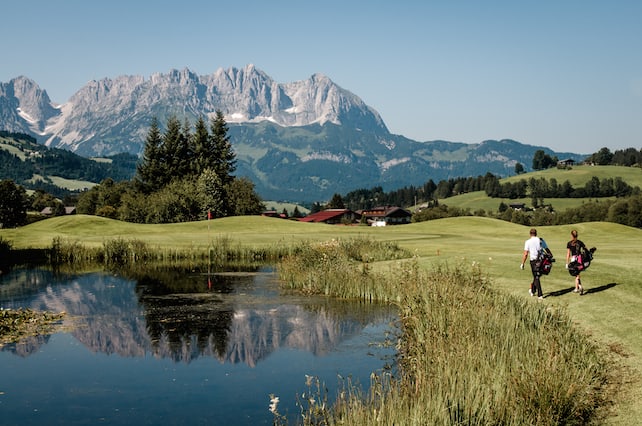 Kitzbuhel is an excellent resort golf destination, with two championship courses, hotels in all categories and plenty of gourmet dining. Eichenheim, designed in 2000 by American Kyle Phillips, revered in Scotland for his modern classic links at Kingsbarns, takes no prisoners. From the first, a precision hit through a narrow gorge to the green, to the last, a well bunkered uphill dogleg, this is a roller coaster ride.

The perspectives are irresistibly dramatic, but a moment of inattention on holes involving majestic cliff-top tee shots and precipitous ascents will ruin a good card before you can shout “Fore!” All but the super fit should take a buggy, not least for the winding mountain trails from green to tee.

Italy meets Switzerland on the northern shores of Lake Maggiore with wondrous results. Unlike most courses in the Alpine catchment area, this one is almost always open, benefiting from a south-facing aspect in winter and shady trees in summer.

Its roots are pure English parkland, with input from the early 20th-century greats, Harry Colt and Henry Cotton. Their ghosts would find their work largely unchanged: the course is short and flat with no prohibitive rough, but the traps those yesteryear masters laid for the unwary are still potent today. Be warned that the traditional clubhouse is very hard to leave. 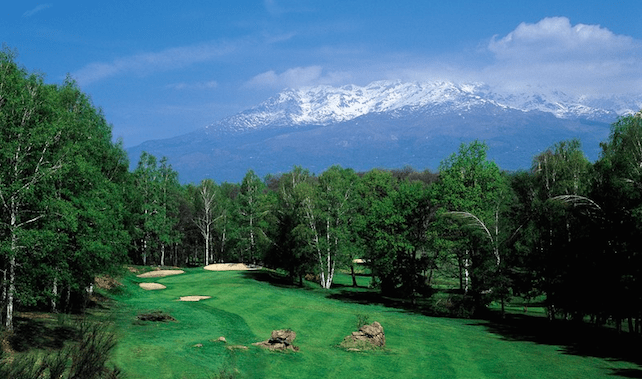 A widely acknowledged classic created in 1958 by Harry Colt’s associate, John Morrison, in the foothills to the north east of Turin. The terrain is made for golf, with fairways cut through oak, chestnut and birch forest. Factor in numerous streams, ditches and strategically-placed bunkers for an exceptional test.

The teenage Rory McIlroy won the 2008 European Amateur Championship here, a precocious victory that signalled the greater ones that have followed. Lesser players should note that a tight layout puts a premium on accuracy. If leaving the driver in the bag doesn’t boost your score, console yourself with the view. 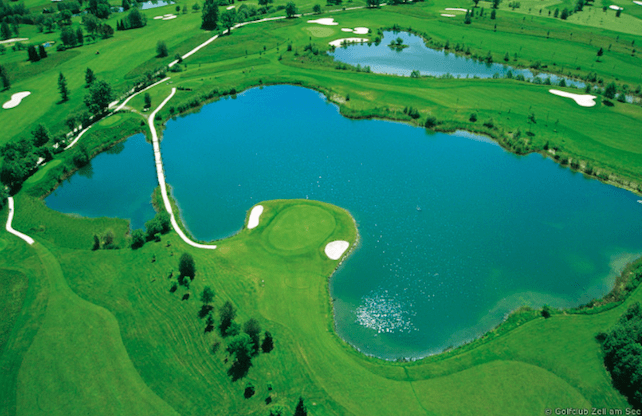 Two of Britain’s favourite ski resorts, the pretty village of Kaprun and the lakeside town of Zell-am-See, share two championship courses on one site in a lovely corner of Salzburgerland. Schmittenhohe and Kitzsteinhorn have very walkable American-style layouts, with huge bunkers, intrusive ball-swallowing lakes and cunningly placed trees that deflect all but the straightest shots.

ƒtheWith a well regarded golf academy and extensive practice facilities, the Zell-am-See club caters for holiday golfers of all standards. Sitting out on the flower bedecked terrace is an added bonus.

As is appropriate in Scotland, there is plenty of golf. Kings and Queens, James Braid’s early 20th-century classics, have sculpted fairways and cambered greens that blend into the timeless wooded landscape, but today’s masters need a bigger stage. 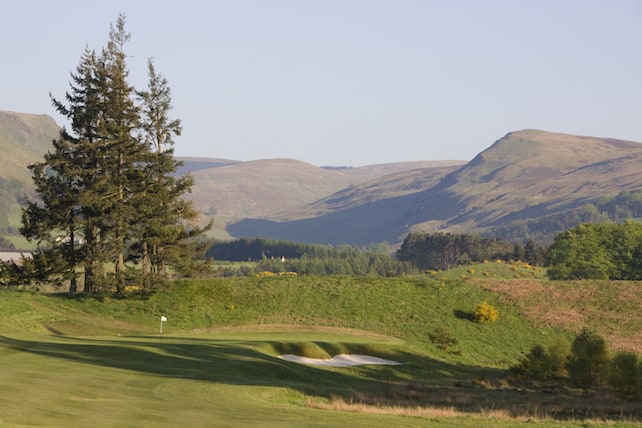 When seed merchant Samuel Ryder dreamed up the Transatlantic contest in 1927, Gleneagles was a railway hotel of baronial proportions, worthy of its nickname, the ‘Riviera of the North’. Nowadays it is part of the Diageo portfolio that also includes Guinness, an exclusive retreat that peddles posh pursuits like falconry, horse-riding and croquet to anyone prepared to take time out from the spa.

At Gleneagles, the PGA is unloved but indisputably long and tough. For the past three years, designer, Jack Nicklaus, has worked on the layout he created in 1993 to make it fit for Ryder Cup purpose. Has he succeeded?

When the players walk through the new access tunnel from their luxury rooms in the hotel to the first tee, the roar from 3,000 spectators will resound in the Andy Murray home in neighbouring Dunblane. “The cheering should work in our favour”, said Team Europe captain, Paul McGinley. Time will tell if he’s right.

For further ideas on summer and autumn activities in the mountains see our features on Cycling to Get Fit, Where to Go Mountain Biking, Top Alpine Spots for Easy Cycling, A Big Alpine Adventure, The Best Resorts for Summer Skiing and How to Maintain Your Ski Fitness in Summer.

Minty Clinch is an award-winning global gypsy specialising in adventure travel. As a film journalist, she interviewed the great and the good and wrote books about American superstars. In the mid 1990s, she traded a sedentary life for adrenaline adventure, primarily skiing and horse riding in remote places. In a moment of madness, she also took up golf, playing in 50 countries without out conspicuous success, but always with huge pleasure. She writes on these topics for national newspapers and magazines, including the FT, the Telegraph, the Mail on Sunday and the Times.

2 Responses to “Where to Play High Altitude Golf”