A Dozen Unmissable Winter Events in the French Alps 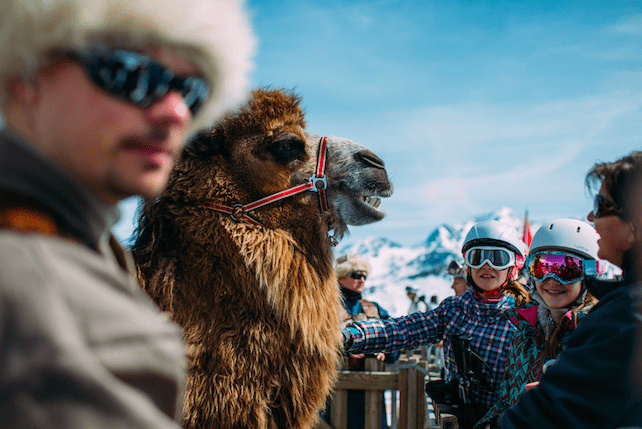 Throughout the winter season, the French Alps plays host to a huge range of world class events. These are both occasions in which holidaymakers can take part, and spectator events with a really broad appeal. This winter sees some big music festivals, fabulous spectacles, and a range of surprising sports events to provide that little bit extra for your ski holiday.

So if you’re planning a ski trip to France this winter, you might want to make sure your dates fit in with a visit to one of these events.

Along with Val d’Isere and Tignes, Val Thorens is the first resort of the season to open its lifts, on November 26. This season there’s a new opening party celebrating all things snow – with gear testing, the Rock On Snowboard tour and lots of other activities over the weekend. Further information: Val Thorens Tourist Office.

Now into its third year in Les Deux Alpes, this mountain music festival – hosted by the organisers of Ibiza Rocks – is for dance music fans. This year’s edition – headlined by grime godfather Kano and house & techno maestro Seth Troxler – will be the biggest yet. Further information: Rise Festival. 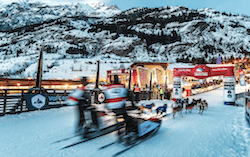 One of the most spectacular dog-sledding races in the world, the 2017 event takes place over two weeks, on 10 stages and in a dozen resorts, including Les Carroz, Les Gets, Megeve, La Plagne, Val Cenis, Aussois and Bonneval sur Arc. Photo: © Vincent Piccerelle. Further information: Grande Odyssee. 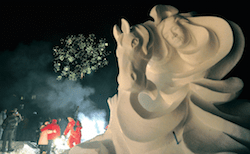 The world’s best ice and snow sculptors come to Valloire to create their masterpieces. You’ll be able to watch the craftsmen at work, before their final sculptures are presented and judged – accompanied by a light and music show, fireworks and a torch-lit descent. Photo: © B.Grange. Further information: Valloire Tourist Office. 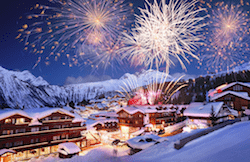 This is the Grand Finale of the world-class firework demonstration competition in Courchevel. To celebrate the resort’s 70th birthday, the winners from the past four years will take part in a final battle for the world’s top pyrotechnic artist. The four finalists come from the UK, Austria, France and Italy. Photo: © David Andrée. Further information: Courchevel Tourist Office.

This epic rugby sevens tournament on snow features legends of the sport, played in six resorts, including Valmorel, La Clusaz and Val Thorens. 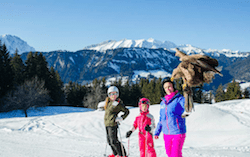 Eagles, owls, vultures and hawks from the Les Aigles du Léman animal park come to Val d’Arly where you can see them on the slopes.

Not to be missed is Skiing with Eagles, in which participants complete a ski descent accompanied by an eagle and falconer. Further information: Val d’Arly Tourism.

Skicolor, now into its 3rd year, is an event which paints the mountains in technicolour. Participants ski through explosions of coloured powder wearing protective white suits, the goal being to cross the line as colourfully as possible. Mindful of its ecological footprint, the resort supplies everyone with coloured powder that is totally natural and mountain friendly. Further information: Skicolor.

The 5th annual winter golf festival on snow takes place in the heart of Val d’Isere again this spring. As part of the festival, some 40 pro-am teams compete on a nine-hole course – you can meet the sporting stars as well as watch the battle between the teams from France and the UK on March 24. Winter Golf is a partner of the Ryder Cup 2018. Further information: Winter Golf Cup.

The 12th edition of the Comic Book Festival is organised by the Glénat publishing house in Alpe d’Huez. You’ll be able to discover the world of comic authors who make the event the cultural and family-friendly occasion it is. Lots of workshops and animated films are planned and the comic book theme will be carried through to the following week with different free shows and activities. Further information: Alpe d’Huez Tourist Office. 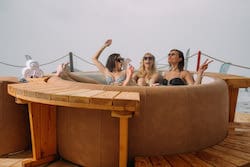 One of the flagship Skiing Into Spring events, La Plagne decks out six mountain peak with six different themes. Expect to see bungee jumping, reindeers, saunas, hot tubs and beach bars at the top of the mountains across the whole ski area. For example, Funi Plagne at La Grande Rochelle will be transformed into a Trans-Siberian train, and Le Fornelet will have a dream-like theme with Merlin the Wizard performing along with juggling elves. Photo: © S.Chardon. Further information: La Plagne Tourist Office.