Here We Go Again: Heavy Snow Falling in the Alps 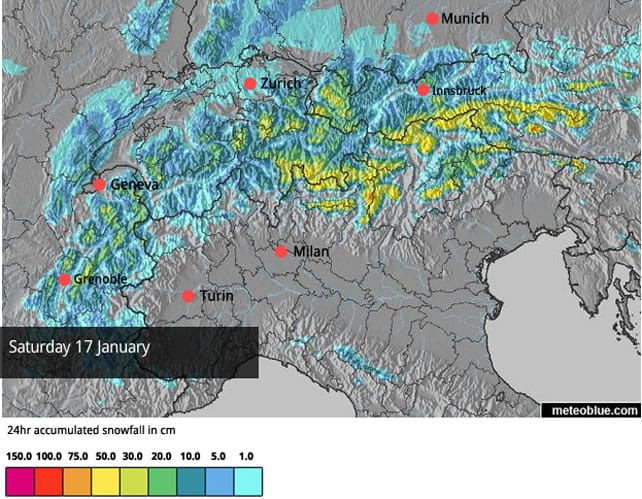 Welove2ski’s snow forecast for the Alps for January 17.

Here we go again. The next gargantuan helping of snow is being served in the Alps, and it’ll keep coming until the weekend at least. At altitude in the Austrian Arlberg, in Switzerland and in France, we could see over 150cm.

It’s going to be a stormy time. As at new year, high winds will be a feature, and in the Arlberg there could be thunder too. And I’m afraid we’ll also see yo-yoing temperatures, as the wind swings from a westerly to a north-westerly direction, and back again. As a result, it’ll be raining hard at lower altitudes from time to time.

I’ve been in mighty Chamonix these last two days. Today we’ve been sheltering on the tree-lined pistes of Les Houches, as Chamonix’s other ski areas are wind-affected and shrouded in cloud. The altitude’s fairly low (the local lift system tops out at 1900m, and the pistes drop to 1000m) and whilst the top half of the ski area has been deliciously powdery, we’ve had soggy conditions lower down.

Not that I’ve cared. The snow’s been soft, visibility has been good (thanks to the trees), and I’ve had a wide-ish pair of Dynastars strapped to my feet which have been perfect for the conditions. What’s more I’ve had excellent company: two other writers, Leslie Woit and Dave Watts, and the brilliant guide Fred Bréhé who kept the skiing varied all day. 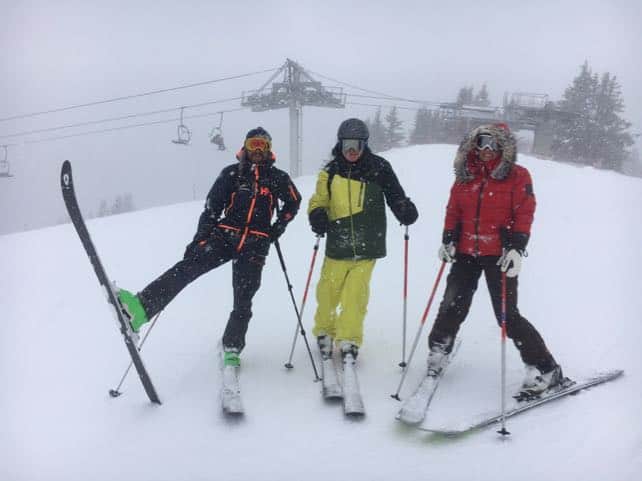 First thing this morning, we were even treated to that sublime surface you get when 10cm of light powder settles on a freshly-groomed piste. It felt like we were skiing on air.

I’m looking forward to a return trip tomorrow, too. The temperature’s going to drop, and with it the rain/snow line, and there’s likely to be powder not slush at 1000m. Thursday, by contrast, will be mild, with the freezing point at 1500-2000m, before temperatures drop sharply again on Friday as the wind changes direction.

As I said in Saturday’s snow update, the existing snowpack has been unusually stable, and the periods of rain at lower elevations will help stabilise the new snow too. But at altitude we can expect the avalanche risk to rocket. We’ve already had a couple of worrying moments this winter, with villages threatened by avalanches. (This afternoon, as we drove away from the slopes, Fred pointed out the avalanche debris from last week’s near-miss at the eastern end of Les Houches.) Let’s hope Mother Nature doesn’t take us any further down that path.

For the time of year, snow depths are already close to record-breaking in parts of France. In Val d’Isere and the Haute-Maurienne in France, they’re particularly deep. Here’s how the top of the Cugnaï chairlift in Val d’Isere looked before the new snow started to fall. 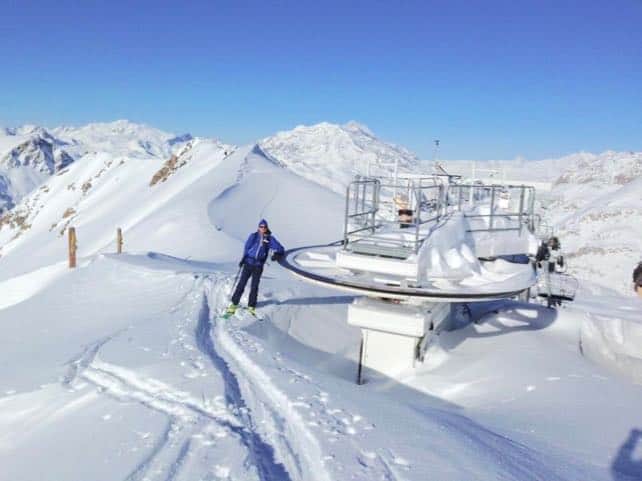 But right across the northern Alps, no-one needs to worry about snow depths above 1300m any more. We’ve got more than enough snow to last till the end of winter. In St Anton in the Austrian Arlberg, for example, there’s 80cm of snow packed down at village level, and 100-190cm mid-mountain. At village level in the lower resorts, we may see rain-affected pistes showing patches of brown now and again over the next few days: but with periods of snow between the downpours, they’re unlikely to turn into properly threadbare patches.

There’s been less now on the southern side of the Alps – and it looks as though most Italian resorts will miss out on this latest storm. But thanks to moderate to heavy snow last week, as well as the continuing work of the snow cannons, snow depths are pretty healthy there. In the Dolomites, Selva has 110cm of settled snow on its higher pistes, and Canazei up to 240cm.

No Responses to “Here We Go Again: Heavy Snow Falling in the Alps”