Wintry Weather on the Horizon for the Northern Alps 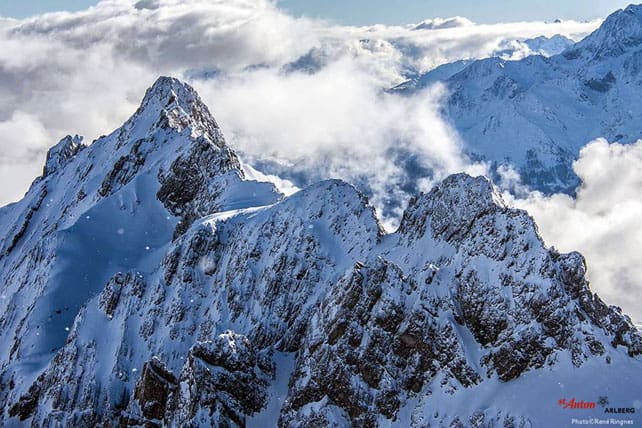 A magnificent day on the Weißschrofenspitze, above St Anton. Photo: © Rene Ringnes

After a weekend characterised by magnificent, spring-like sunshine, the weather in the Alps is about to get more complicated.

To begin with, it’ll stay mild, but it will also be cloudier and windier – especially in Austria and eastern Switzerland – and there’s a good chance of a cold snap on Friday.

The first weather front is due into the north-eastern Alps tomorrow afternoon. Expect snow above about 1800m, and rain lower down. Then skies will clear on Wednesday, and temperatures will rise again, before much colder air arrives on Thursday evening.

Switzerland and Austria will see the biggest change, and in the latter the freezing point could sink as low as 900m on Friday. The cold snap should be accompanied by snow showers. 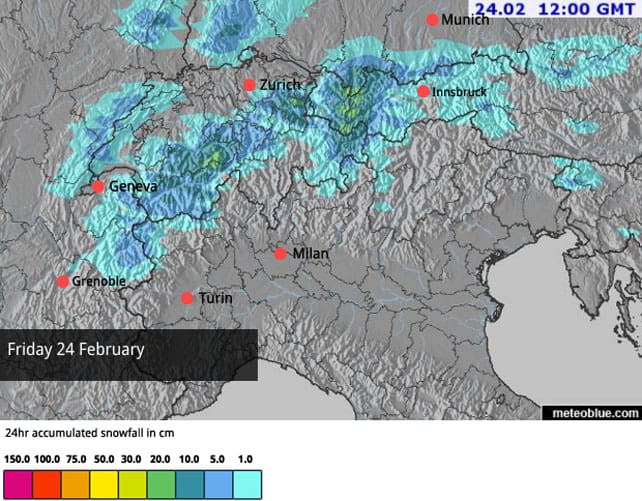 By contrast, the French and Italian Alps should stay mostly dry.

This is not exactly the dump the Alps need right now, to set them up for the back end of the season, but there is hope of a more prolonged wintry spell at the beginning of next week. It’s too soon to be sure of this, of course – but here’s the ECMWF’s current chart for March 1. 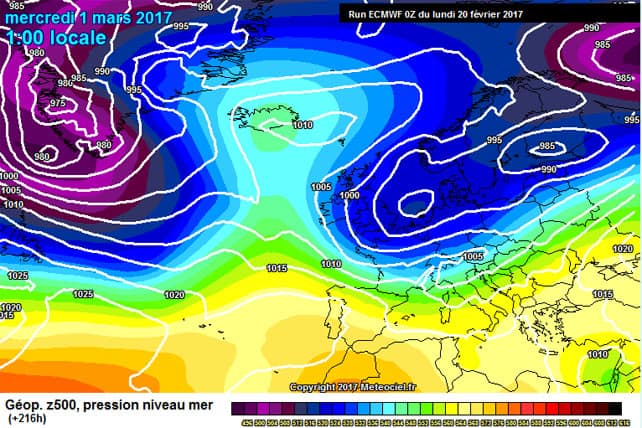 Let’s hope it’s on target! Currently, there’s good piste-skiing on offer right across the Alps – provided you take account of the daily cycle of softening/refreezing on the lower slopes. But away from the French resorts the cover off-piste is thin for the time of year – even in Austria and eastern Switzerland, where there was 20-25cm of fresh snow on Friday. What’s more, the recent spring-like conditions have affected the quality of the snow. The good news is that the avalanche risk has settled back in recent days: but it’s not exactly a powder party out there at the moment – unless you hire a guide and go ski touring up high.

Here’s how it was looking earlier today above Soll in Austria’s Wilder Kaiser. Here the snow is currently 60-70cm deep, on-piste. 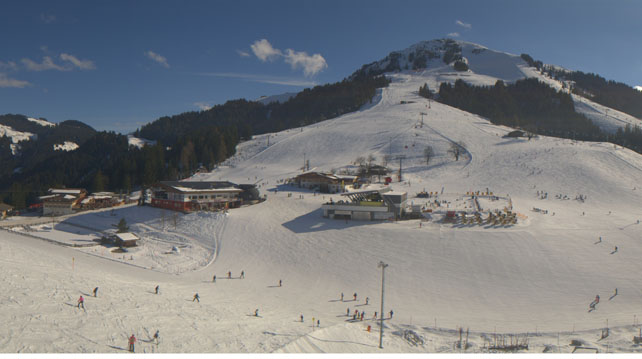 And this was the scene at La Croisette in Courchevel. The resort reports 77-116cm of on-piste cover. 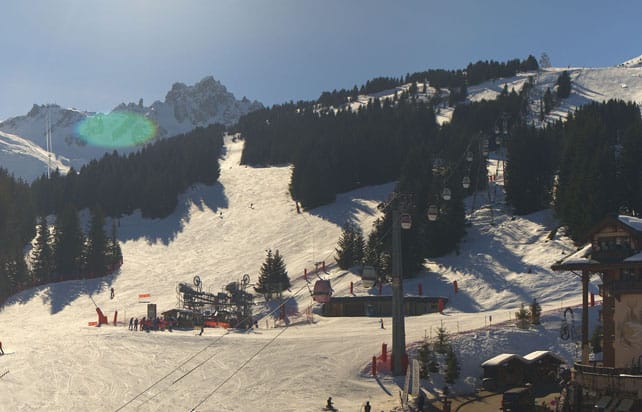 Here’s how it was looking in Serre Chevalier today, where the snow is 20-155cm deep. 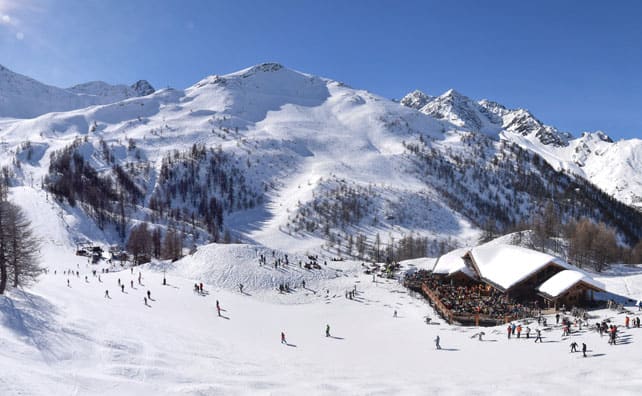 And these were the slopes above Canazei in the Italian Dolomites earlier today. Note the contrast between the beautifully-maintained pistes (which I skied last month, lucky me) and the much thinner cover, off-piste. 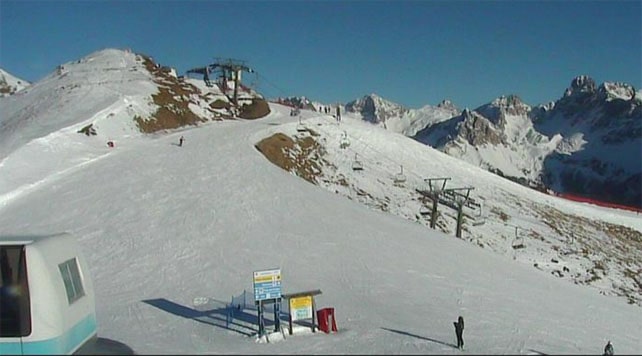 California is in the midst of yet another big storm. Several feet of snow are expected by the time it’s finished, although there will be rain at lower elevations in some resorts. Local snow forecaster Bryan Allegretto reckons on 90-150cm of snow by Tuesday morning in the higher reaches of the Tahoe resorts. Up there, the wind will be gusting at up to 100mph.

Here’s how it was looking in Squaw Valley yesterday, before the storm really got going. 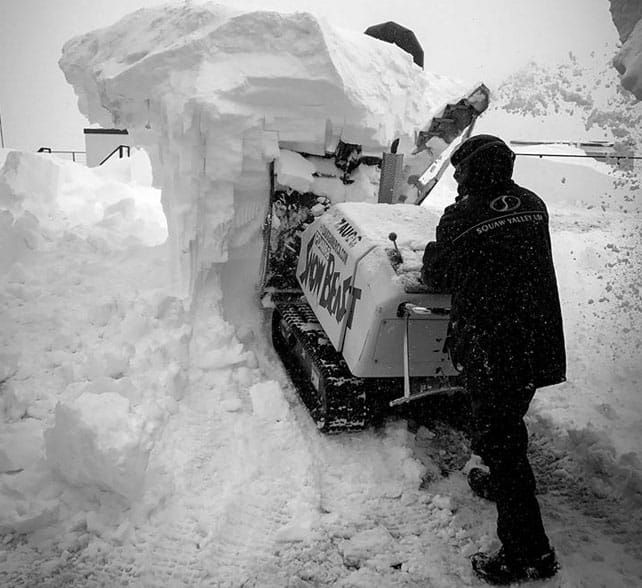 Inland, they’ll feel the effects too. In recent days, the Utah resorts have notched up 25-50cm of rather wet, dense snow, and they’re expecting 30-60cm more by the end of Thursday. Just as welcome is the news that it will be getting colder again, after a prolonged spell of unseasonal warmth.

There’s plenty of snow blowing around in Wyoming, too. Jackson Hole reports 20cm of new snow overnight, and 50cm in 48hrs. It’s still mild there, but temperatures will drop back on Thursday. 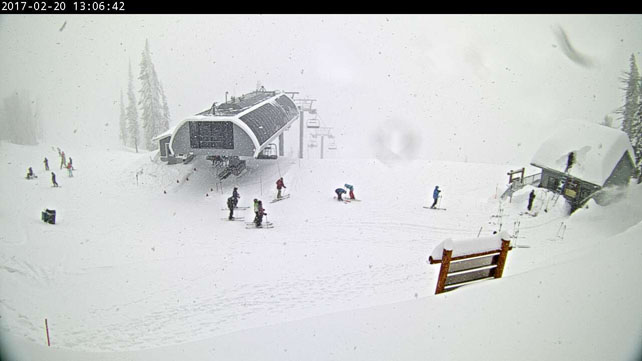 North of the border it’s already colder. Up high in Whistler, Canada, they’re expecting a high of just -5C today. The resort has had 15cm of snow in the last 24hrs and 39cm in the last week.