The Best New Deals for Summer and Winter in The Alps 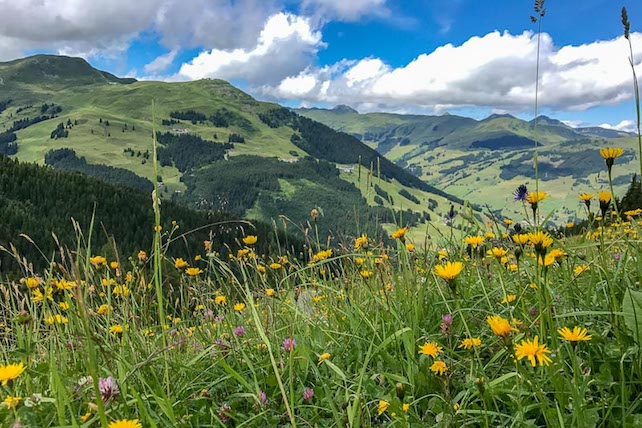 How about considering a summer holiday in the Alps? The mountains are just as beautiful – some would say ever more so – as in winter. Activities include road biking and mountain biking, swimming in natural lakes, hiking, golf and horse-riding. It’s a great way to keep your ski-fitness levels going!

Make sure you pack plenty of sunscreen, sunglasses, and a hat. Don’t forget to reserve your airport parking at least 24 hours before you go – this is especially important during peak holiday periods. If you’re flying from Gatwick, Cophall Parking has some offers just for Welove2ski viewers.

It’s also worth finding out what the specialist travel agencies have on offer in the way of early bookings for next winter, such as SNO, Snowfinders and Ski in Luxury.

Summer in the Alps

Saalbach from £649pp with Inghams
There’s a seven-night holiday half board at the four-star superior Hotel Saalbacherhof in Saalbach, from £649pp. Price represents a saving of £295pp and includes return flights from Birmingham to Salzburg and airport transfers. The package is valid for travel departing on July 6. Bookings: Inghams Lakes & Mountains.

Zell am See from £1,222pp with SNO
Zell am See’s Hotel Berner has been reduced from £1,222pp to £886pp for a seven-night stay commencing June 19. The package includes flights from Manchester Airport, resort transfers and half board. The four-star hotel is popular for its panoramic views over Zell am See’s town and lake. Facilities include a spa and heated outdoor pool. Bookings: SNO.

Areches Beaufort for £80pp with Peak Retreats
Arêches-Beaufort is a traditional year-round working village with plenty of local attractions, such as a visit to the dairy cooperative to see how the regional Beaufort cheese is made, a challenging mountain bike ride, via ferrata, or canyoning. Stay in the recently-opened four-star apartments La Clé des Cîmes, 400m from the village centre. Facilities include access to the indoor pool and wellness area. There’s 25% off the week commencing June 29 when booked by June 28, so seven nights in a two-bedroom apartment is now £80pp (was £100pp) based on five sharing and including standard mid-week return ferry crossings. Bookings: Peak Retreats.

Auffach hiking trip from £599pp
Now in its 44th year, the Schatzberg March celebrates the hiking available in Auffach and across the Austrian Tirol. Awe-inspiring scenery is accessible on the three designated routes of the Schatzberg March; the 5K Pleasure Route, the 10K Family Route and the 15K Expert Route. The variety of routes makes the event accessible to all. Although the hiking takes place on August 18, there is the Summer Night Party with live music organised by Auffach Mountain Rescue.  A seven-night stay at Hotel Harfenwirt, arriving August 17, is priced from £599pp B&B. Price includes return flights from Gatwick.  Information: Austrian Tirol.

Val d’Isere active holiday from £76pp
Val d’Isere has a variety of activities on offer this summer for families, thrill-seekers and those looking to relax. The Manchet and Centre sports parks offers activities ranging rom archery and beach volleyball to horse riding and slacklining. The E-park is where you can try electric motorbikes on a specially maintained track or take a guide and venture off-road into the forest. The Adventure Trail in Rogoney Forest has 75 different challenges and obstacles and five levels, ranging from the child-friendly to an Extreme black course. A seven-night stay, arriving July 13, at Residence les Balcons de Bellevarde is from £76pp (£381 total reduced from £477, so a saving of 20%) based on five people sharing. Return flights from London to Geneva from £128pp with easyJet. Information: Val d’Isere.

Les Gets Mountain Bike World Cup from £65pp per night with VIP Chalets
Over the weekend of July 13 and 14, Les Gets hosts the UCI Mountain Bike World Cup 2019. The appeal isn’t just for professionals: the resort has extensive cycle routes for all abilities. The bike park has 14 downhill tracks, six cross-country trails, a jump park and five electric trails. The resort is serviced by dedicated lifts and eight bike patrols. Stay at Altitude Lodge £65pp per night half board. Prices do not include flights or transfers, but these can be arranged. Bookings: VIP Chalets.

Sainte Foy Christmas for £1,779pp with Erna Low
There are now eight nights for the price of seven – making a saving of15% or over £500pp – at Les Fermes de Sainte Foy this Christmas. Book a self-drive package including Eurotunnel Flexiplus crossings and two-bedroom four- to six-person apartment for eight nights from December 20 for £1,779 (full price was £2,305). Bookings: Erna Low.

St Anton from £899pp with SNO
Get 50% off your lift pass when you book Chalet Hanzel in St Anton for the week beginning January 4. Starting at £899pp, a seven-night package includes Gatwick flights, airport transfers, chalet catering and two days of mountain guiding. The chalet sleeps six and has a private sauna. Bookings: SNO.

Val Thorens from £348pp with Ski Collection
In Val Thorens stay in four-star Chalet Altitude in the quieter Les Balcons area, with the main slopes 150m away and the opportunity to ski back to the residence. Facilities include an indoor pool with sauna. There’s 20% off the weeks commencing November 23 and 30, December 7 and 14, January 11, April 18. There’s also 10% off the weeks commencing January 4, 18 and 25, February 2, March 14, 21 and 28, April 11 and 25. All need to be booked by September 30. Seven nights in a two-bedroom apartment from £348pp (was £424pp) including Eurotunnel crossings with free FlexiPlus upgrade. Price based on five sharing on week commencing December 7. Bookings: Ski Collection.

Santa’s Lapland family trip from £2,370 and free child places
Families with kids aged aged two to five are bing offered free child places in select hotels (available on all flights on a first come, first served basis). Three- or four-day breaks to Saariselkä in northern Finland are from 19 UK regional airports, and the holiday includes return flights and transfers, half board, thermal clothing, husky sledding reindeer sleigh ride and a private family meeting with Santa. Additional excursions include skiing, an extended husky safari or a Northern Lights Adventure by snowmobile. Parents and children aged 4-11, staying in Hotel Tunturi or Hotel Holiday Club (departing before December 19), go half price on the ‘Northern Lights Adventure’ by snowmobile if booked before June 30. For example, on December 16 it’s from £2,370 per family (based on two adults and two children under five years sharing – including two free child places), flying from Edinburgh. Bookings: Santa’s Lapland.

Les Carroz from £403pp with Peak Retreats
Les Carroz is well-linked to the other resorts in the area such as Flaine, Samoens, Morillon and Sixt. Stay at Les Chalets de Jouvence apartments at the foot of the slopes, a short walk to the village centre. Facilities include access to the indoor pool with the O des Cîmes Spa Centre. There’s 15% off the week commencing December 21 and 10% off all other weeks (except on February 8, 15, 22 and 29, March 7) when booked by October 31. Seven nights in a two-bedroom apartment from £403pp (was £466pp) including return Eurotunnel crossings with free FlexiPlus upgrade on most dates, based on five sharing a two bedroom apartment in Belle Piste (sleeps up to six) on week commencing December 21. Bookings: Peak Retreats.