Ready for the Start of World Cup Racing 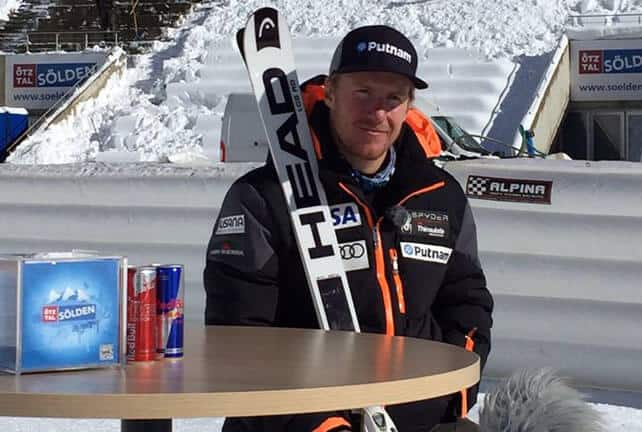 After a splendidly snowy ten days in the Alps, we’re all set for the start of the World Cup ski season this weekend.

Racing kicks off on the Rettenbach glacier above Solden on Saturday, with the women’s giant slalom. The men will follow in the same event on Sunday.

Here’s how it was looking above the resort this afternoon at 3000m, by the Ice Q restaurant. 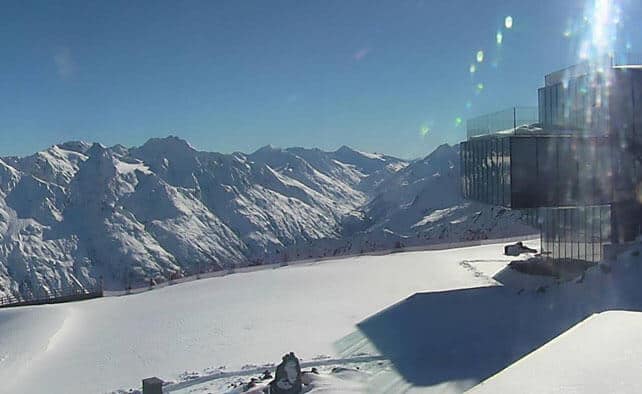 And here, if you don’t mind the German commentary, is footage of the US ski team preparing for the first race.

(There was sad news from Solden today, however. The overall World Cup champion of the last two seasons, Anna Fenninger, crashed in training and is out for the season with two serious knee injuries.)

As you can imagine, conditions are very good across most of the Alpine glaciers at the moment. In Tignes, British ski school Snoworks kicked off its autumn programme of ski courses at the weekend, and reports excellent conditions up on the Grande Motte. Here’s how it looked yesterday from the cable car… 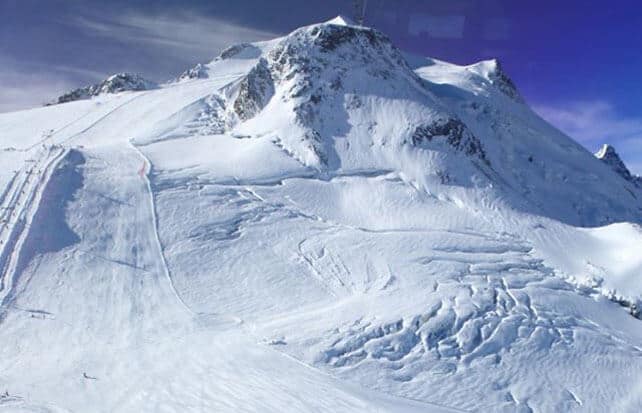 Meanwhile, pictured below is the view up the Double M piste from Val Claret this afternoon. As you can see, things got pretty wintry for a time – and in fact there was snow down to 1550m at Tignes-les-Brevieres last Friday. 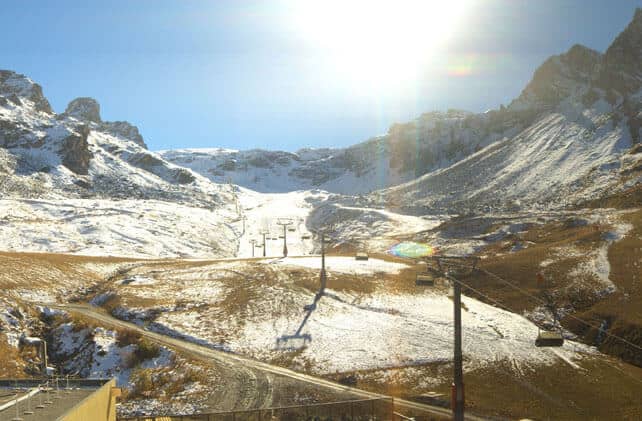 The Austrian skicross team has been training on the Pitztaler Glacier in the Tirol. Here they are yesterday. 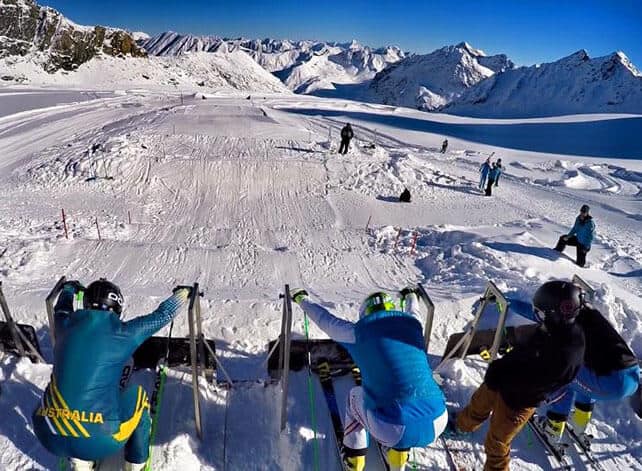 And, pictured below, were the excellent conditions on the Kitzsteinhorn glacier, above Kaprun, on the same day. 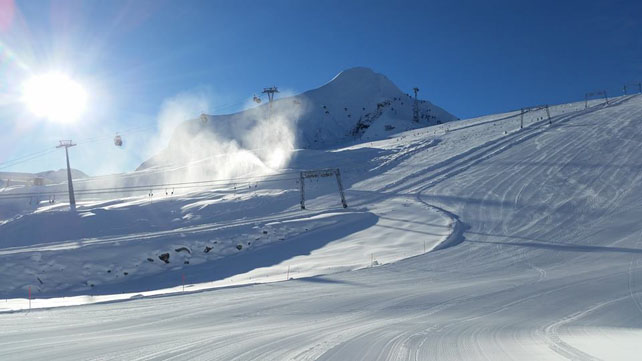 One other feature of the mid-October snow was the way it tucked in below the main east-west ridge of the Alps, and dumped on the Sudtirol in Italy. You can still see the effects above Val Senales, which is south-west of Obergurgl. 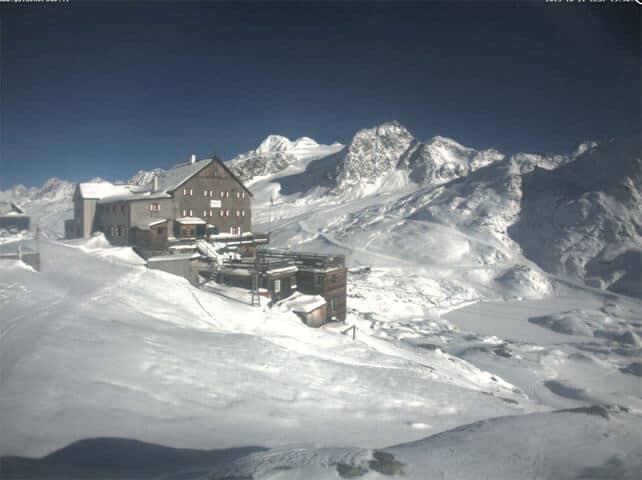 Pictured below is Sulden/Solda, east of Bormio in the Ortler Alps, which has decided to open this weekend. I wonder why? 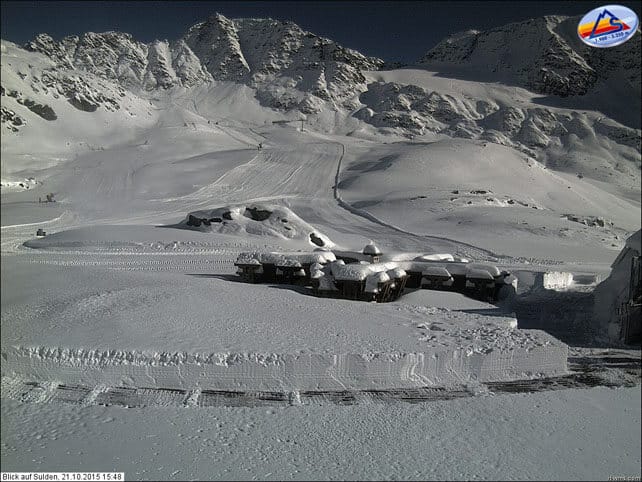 In other words, it’s looking pretty good right now. The glaciers are recovering from the baking hot summer and pre-season skiing is in full swing. However, we’re still a few weeks from the start of the mainstream ski season (Obergurgl opens on November 12), which is a good thing, because there’ll be a few more hiccups in the weather before winter takes hold. In fact, the first is due at the weekend, when much warmer air reaches the Alps, and the daytime freezing point jumps above 3000m. We can expect the snowline across the range to go scurrying back uphill.

Still, if the sight of all this white stuff has got your muscles tingling, check out our guide to early-season skiing and the best resorts for Christmas for ideas about where to go early on.

And don’t forget to enter our Val d’Isere competition! First prize is a rather luxurious three-night trip over its opening weekend (November 28-29)… 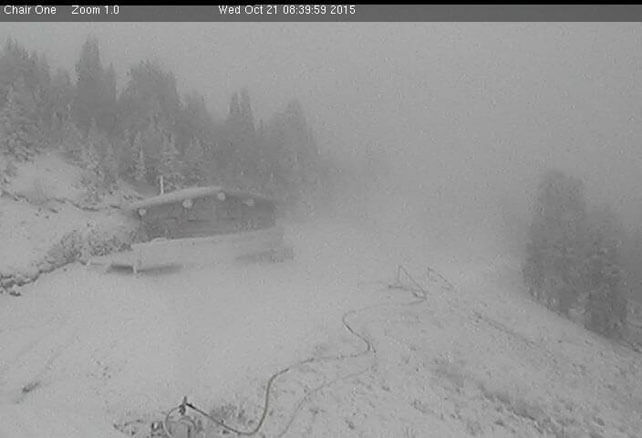 There’s been some more snow in the Colorado Rockies. Pictured above was Loveland this morning, with fresh snow on the ground and the cannons working at full pelt.

Nevertheless, thanks to an exceptionally mild autumn, the Rockies have been comprehensively beaten by the New England resorts in the race to open the first pistes. Killington in Vermont got going on Sunday, and Sunday River in Maine started on Monday.

Here’s a rather tasty moment from October 19 in Killington. 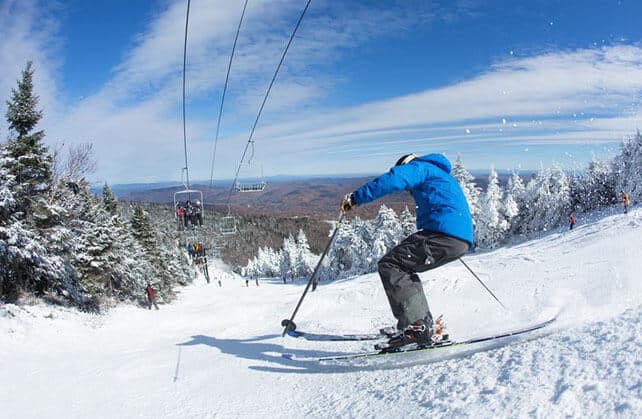 Now we’ll have to see how long it takes for the Rockies to catch up. In Colorado, local snow guru Joel Gratz reckons there should be more snow at lower elevations on Thursday, along with cool night temperatures at the weekend – which should allow A-Basin and Loveland to take some big steps towards opening their first runs.

Other resorts are lining up close behind. Copper Mountain is due to open on November 6, and Breckenridge on November 13. Lake Louise in Canada is slated to open on November 6, too. However, the powerful El Nino which has developed in the Pacific does seem to be having a warming effect on the weather – and the onset of winter could be very stop-go this year in the west.

No Responses to “Ready for the Start of World Cup Racing”