Excellent Late-Season Conditions in the Alps

Winter made a spectacular comeback to the northern Alps last week – and it’s still snowing in parts of Austria today. As a result, there’s some lovely skiing to be had on cold, soft snow.

However, the main story this week will be the return of spring. The sun’s already out in the west, and from Wednesday temperatures will jump. 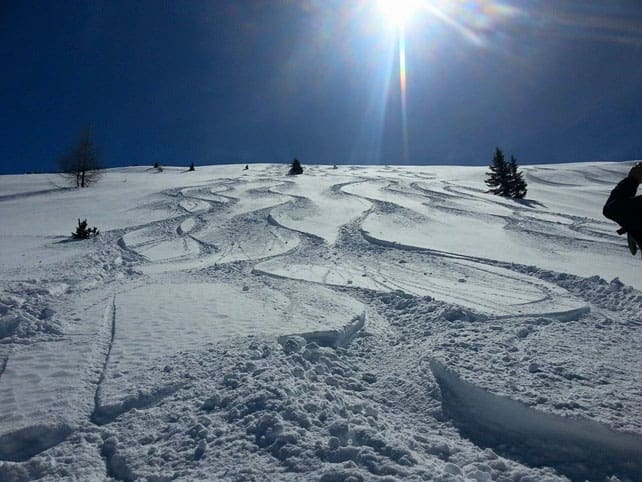 In the northern Alps, the first week of Easter skiing turned out to be one of the snowiest of the season. In parts of Austria, well over a metre of the white stuff fell at altitude, and in the northern half of the French Alps, 50-90cm was quite common. There was more snow on Saturday: 20-25cm fell above Chamonix in France, there was 15-30cm in the northern Swiss Alps, and 10-15cm in Austria, with another dusting yesterday.

There’s a little more snow expected in Austria and eastern Switzerland today, especially around the middle of the day. Here’s the current snow forecast. 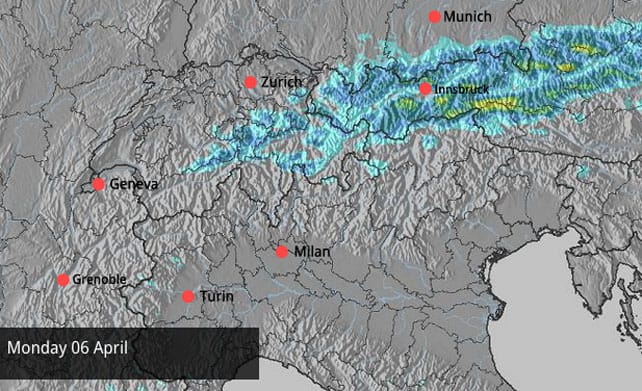 Aside from the snowfall totals, winter’s return last week had two other characteristics. One was the strong wind, which helped to send the avalanche risk through the roof. Across most of the French, Swiss and Austrian Alps, it’s still considerable (3/5) at altitude, and caution is needed if you’re planning to ski off-piste.

The other remarkable feature has been the low temperatures since Wednesday last week – and it’s still cool for the time of year, thanks to a north-easterly airflow across the region. In France today, the freezing point is at 1300m, and in Austria 900m. Of course, the April sunshine has a lot of power, and whenever it’s been out, it’s had an impact on the cover above that level on south-facing slopes. But all the same, from about 1800m upwards conditions are remarkably wintry, on piste. Above 2200m they’re superb.

Right now, the most consistent conditions are in Austria. Not only has it had more snow, on more days, it’s also enjoyed lower temperatures. It’ll stay that way for a day or two more, as well.

Below is a quick squizz at the webcams, starting with the view over the Bellevarde sector of Val d’Isere, in France. Here, the snow is currently a healthy 102-190cm deep. 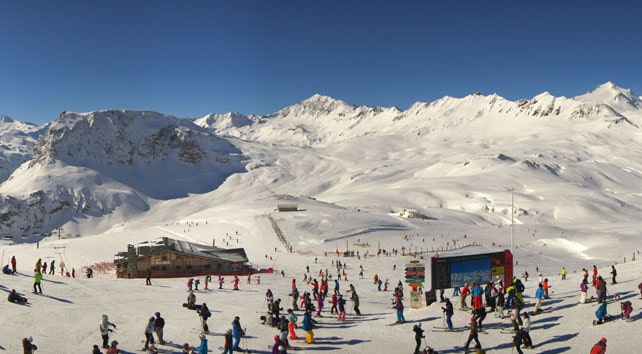 Pictured below is the scene above Val Thorens, in the Three Valleys of France. Here the snow is 150-260cm deep, and preparations are well under well for Sunday’s 3 Vallees Enduro – the muscle-melting race for teams of three which takes you all over the Three Valleys ski area. Registration is still open if you fancy a challenge this weekend.

Pictured below is Serre Chevalier this morning. In common with other French resorts south of Grenoble, Serre Chevalier had less snow from last week’s weather than its rivals in the north. But there’s still good spring skiing to be had on the higher pistes. Here the snow is 13-108cm deep, depending on altitude. 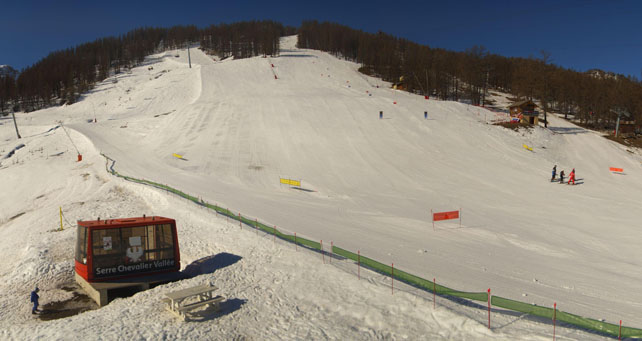 Pictured below is high-altitude Cervinia in Italy – one of the key late-season resorts in the Alps. It’s caught a fair bit of snow from the storms in the northern Alps – and had a 10cm top-up on Saturday. The snow here is 30-290cm deep. 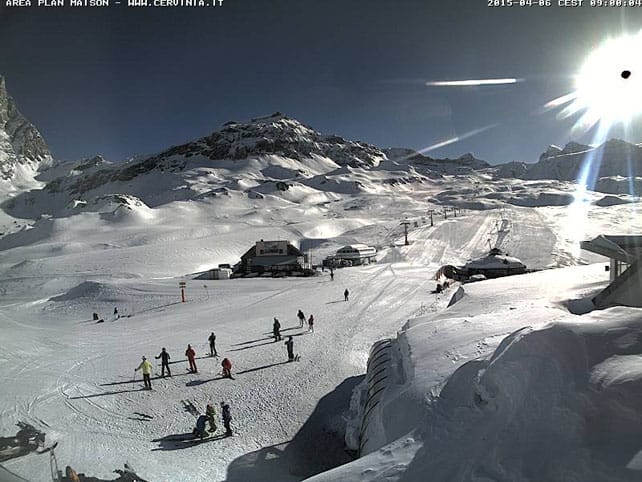 Below is how it’s looking this morning at Engelberg in Switzerland, where the snow is 240cm deep mid-mountain and 360cm at the top. 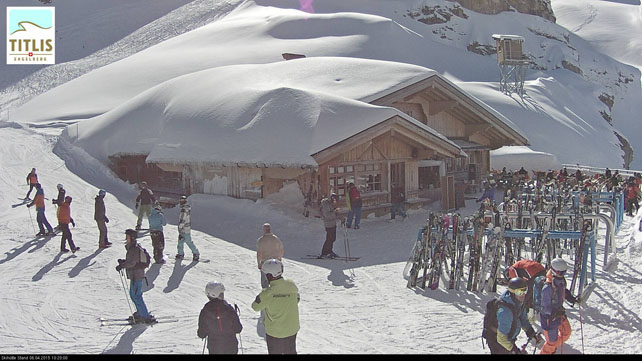 Below is how it’s looking on the Stubai Glacier, south of Innsbruck today. Here the snow is up to 240cm deep, and there’s clearly some fresh powder to be enjoyed there still. 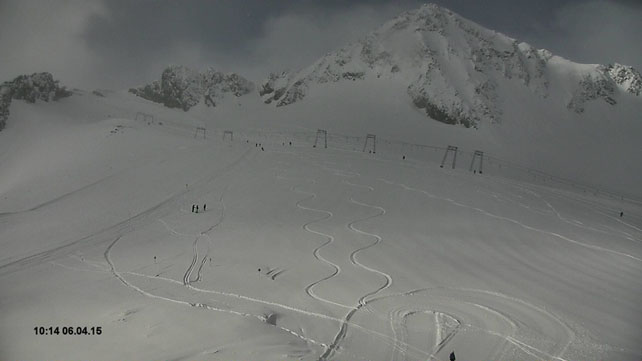 Finally, this is how it’s looking at the top of the Schmitten, above Zell am See – where today’s snow is already falling.

In a word: spring. The sunshine will spread to all parts of Austria by midweek, and the north-easterly winds will be replaced by much warmer air from the west or south-west. The freezing point will be up to 2600m in France on Thursday, and maybe 3000m in Austria.

On all but the highest, shadiest slopes, the change in the quality of the snow will be sudden and dramatic, and despite the deep cover, you’ll need to adopt spring-skiing tactics to make the most of it.

Yesterday, the Canadian Rockies were the place to be, thanks to a 30+cm dump on Saturday. In Banff National Park, Sunshine Village reported 37cm of fresh, and Lake Louise 34cm.

Here’s how it was looking in Sunshine village… 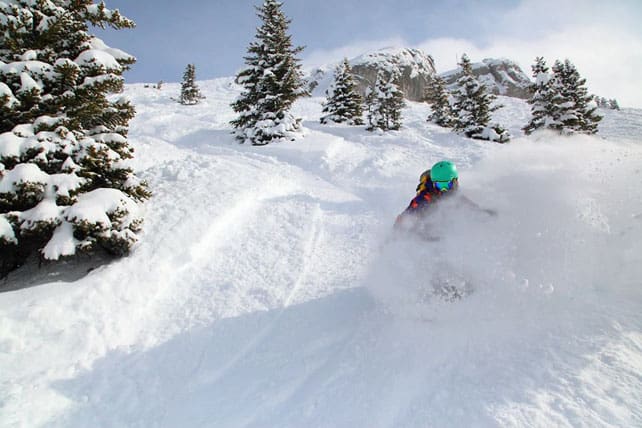 This was the scene above Lake Louise at the end of the day, with another snow shower passing through. 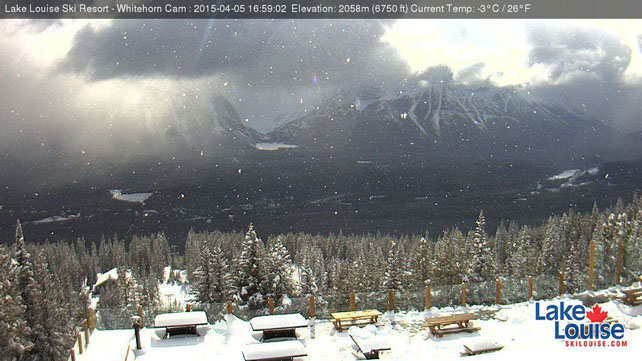 The outlook now is for mild and sunny weather. There’s the chance of more snow across western Canada next Saturday.

South of the border, it looks as though Wednesday could see some snow in both the Utah and Colorado Rockies, after another mild and sunny spell. Parts of northern Utah could see 20-odd cm of fresh snow.

One Response to “Excellent Late-Season Conditions in the Alps”