Please Sir, Can We Have Some More Snow? 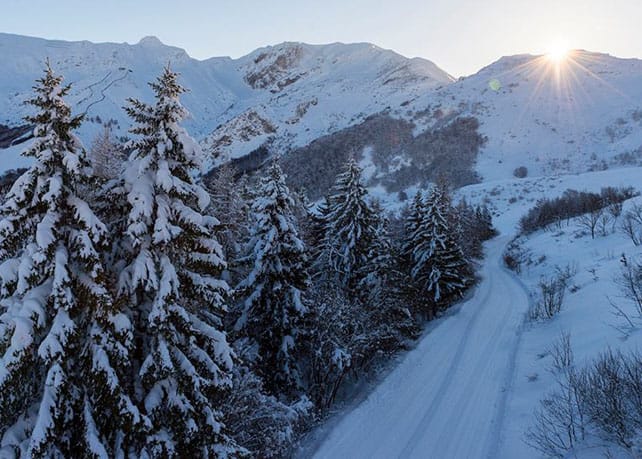 First of all, happy Christmas, Snowfiends. May all your mince pies be plump and sweet – and dusted with the correct amount of Puderzucker. I hope it’s a peaceful and relaxing time.

Second of all – would you mind sacrificing a chicken or two to the Snow Gods when you’ve got a moment? We need a lot more of the white stuff in the Alps. Overall, the situation isn’t nearly as bad as it was in 2014 and 2015: but it’s far from perfect. With the notable exception of the resorts of the south-western Alps and several of the high-altitude areas, everyone will be skiing snow-cannon snow over the Christmas weekend.

Under the circumstances, the resorts have done extraordinarily well – and we can thank a month of (mostly) cold, clear nights for that. Conditions have been almost perfect for the cannons, and some resorts have made staggering amounts of snow as a result.

In the Dolomites, for example, they’ve only had only had a dusting of the natural stuff. But all the same, the Dolomiti Superski area is powering into the Christmas period with 900km of pistes open. Many of them are thick ribbons of white against the grass. But – as I discovered last winter in the Latemar ski area near Moena – the best snow-making teams are able to make very good skiing surfaces these days.

Here’s how it’s looking this afternoon in Val Gardena. 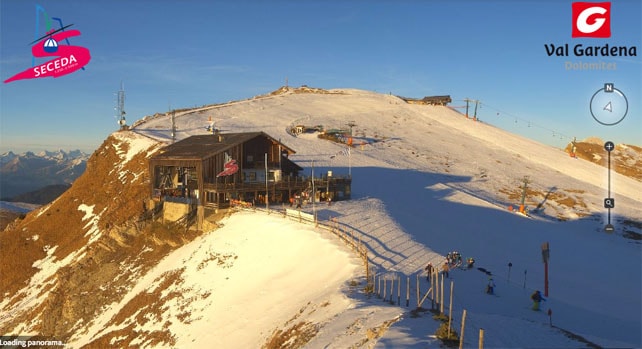 Meanwhile in Austria, there have been a couple of light-to-medium snowfalls in the last two weeks – in the Salzburgerland and the Tirol. But here too they’re heavily reliant on snow-cannon snow. The Skiwelt, for example, has 177km of pistes on offer today. Saalbach has 71 of its 110 pistes open.

Let’s hope winter gets its act together soon.

In the meantime, it’s the resorts of the south-west that have the best top-to-bottom cover. Thanks to snow in late November, and at the beginning of this week, the scene here is far more wintry than elsewhere in the Alps. Limone Piemonte (see photo, above), currently has 80cm of cover on its lowest pistes, and 120cm on top. In the Milky Way ski area, Bardonecchia has 40-160cm of settled snow, and Montgenevre, 90-200cm.

Here’s how it was looking this morning in Bardonecchia. 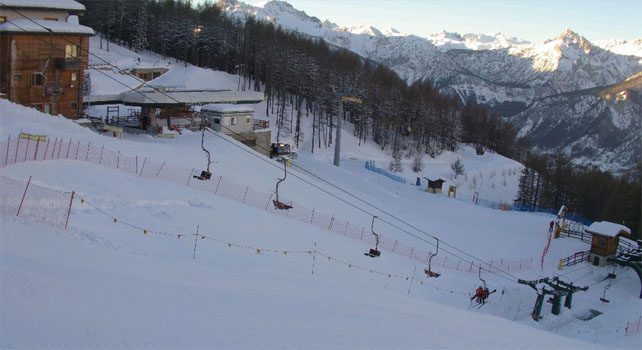 It was snowing at the beginning of the week in Serre Chevalier too – and and here the cover is 30-182cm deep. Pictured below is how it looked earlier today. 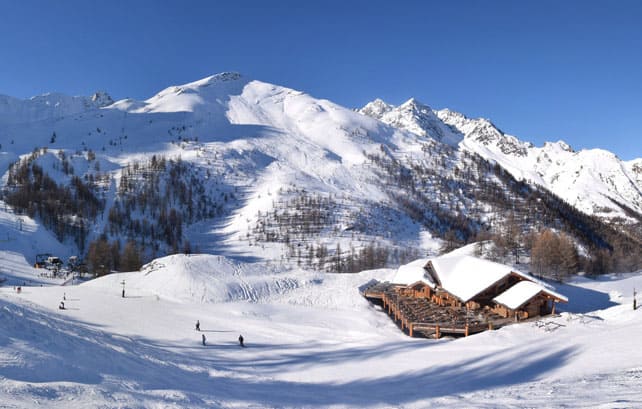 A little further north, the resorts of the Aosta Valley also had a top-up at the beginning of the week. Pila reported 10-20cm, and settled cover 20-200cm deep. Champoluc, on the other side of the valley, had similar amounts of snow. Here’s how it looked on Wednesday. 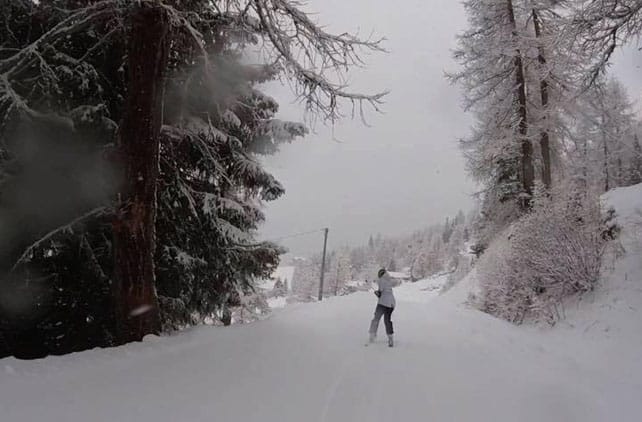 Some of the high-altitude stations had fresh snow too. Val d’Isere and Tignes notched up about 20cm in parts of their combined ski area (notably on slopes above Le Fornet). The cover here is 30-135cm deep. Cervinia had fresh snow too – and reports 35-200cm of settled cover.

This is the view from Tignes-le-Lac this afternoon. 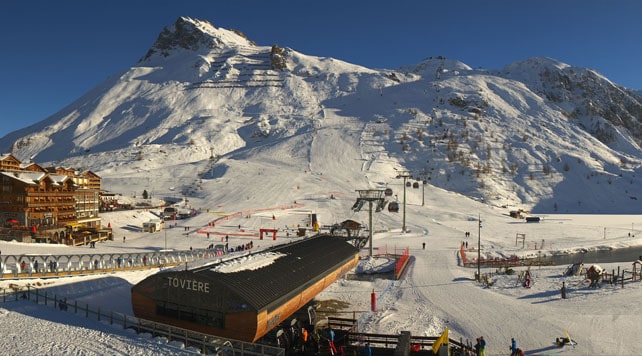 I was skiing in Val Thorens earlier this week, and we had a little fresh snow too: although it was hard to tell how much of it was falling from the sky, rather than being blown in from another slope. Across the French Alps, Monday and Tuesday saw very strong Fohn winds, followed by mild temperatures on Wednesday.

Here’s how it’s looking there today. 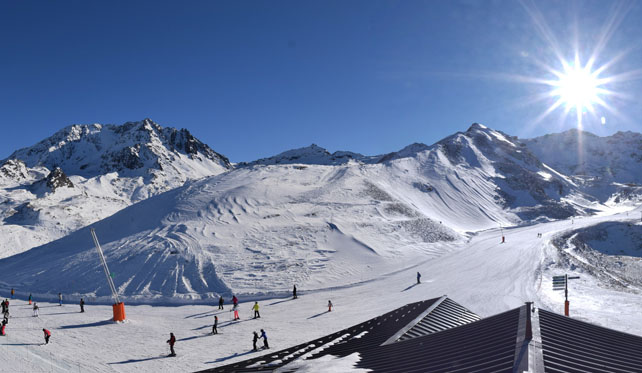 Generally speaking, the outlook now is for sunny and mild weather across much of the Alps – with temperatures a little lower in Austria and the Italian Dolomites, as weather fronts from the north graze the eastern edge of the region. There’s the chance that some Austrian resorts will get a dusting of white as a result: as our snow forecast is currently predicting for Christmas Day. But we’re not expecting significant accumulations. 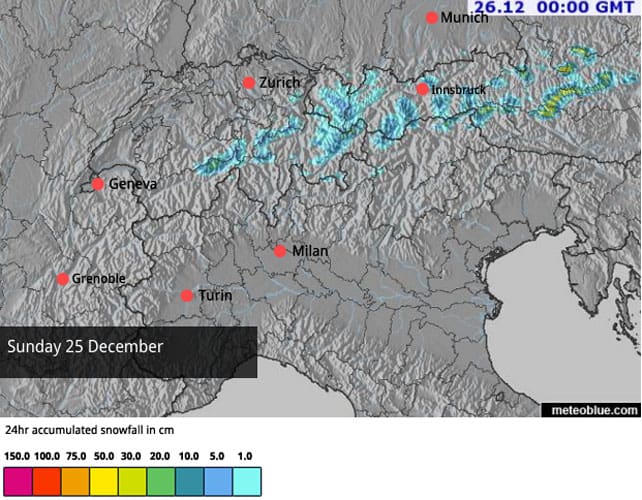 In the west it’ll be warm for the time of year, with the daytime freezing point above 3000m from time to time, so almost everywhere the snow will be going through a daily cycle of melting and refreezing. So bear in mind the pistes will be hard-packed in the mornings.

Looking further ahead, some of the mid-range forecasts are suggesting a big shift to wintry weather in eastern Europe, which will reach the eastern edge of the Alps around January 1. But we can’t yet be sure of that, just yet.

In stark contrast with Europe, the resorts of western Canada and the American Rockies have had a storming start to winter. Sometimes, the snow that’s fallen has been wet and heavy, but there have been enough cold smoke days to keep everbody happy. In Colorado, Breckenridge has had 182cm of snow so far this month. In Wyoming, Jackson Hole has had 391cm mid-mountain since the start of winter (and 563cm at the top). In Canada, Whistler has had 414cm since the start of winter.

Here’s how it looked on the backside of Lake Louise in Canada on Wednesday.

So far, in the American Rockies, this week has been quieter than last (which culminated in a magnificent powder day on Saturday). But there’s been more snow overnight and it looks as though Christmas Day will be a powder day in many resorts.

No Responses to “Please Sir, Can We Have Some More Snow?”