Some Fresh Snow in Austria: But the Rest of the Alps Must Wait

High pressure continues to dominate the weather across the Alps. It’s been that way since late November.

However, in that time there have been a few interruptions, especially around the edges of the region – and we’re seeing one now, in Austria. Here, some eastern and central resorts saw light snowfall on Christmas Day. They’ll see heavier snow falling today and tomorrow, too.

Here’s the snow in Schladming this afternoon. 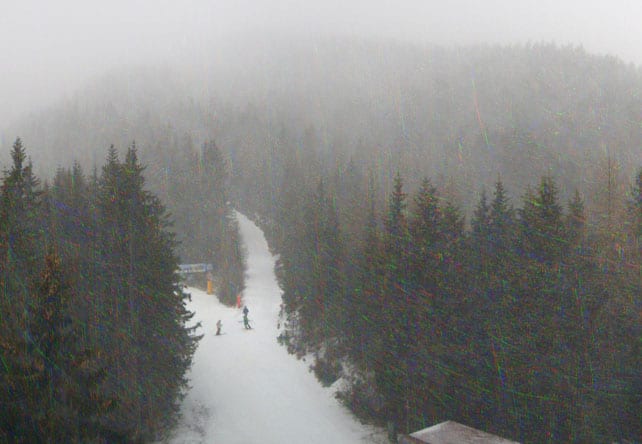 And this is the snow forecast for tomorrow. 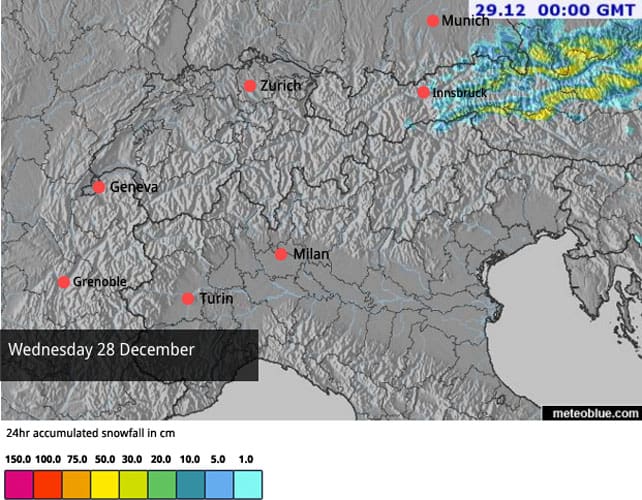 At the moment, it looks as though 30cm, or more, could fall in the likes of Schladming, and on the Kitzsteinhorn glacier. Meanwhile, further west in the Tirol, Mayrhofen is in line for a 5-10cm top-up.

The snow will blow in on cold northerly winds, so it should settle down to village level for a time. But temperatures will rise on Thursday, and we can expect the much of the off-piste snow to melt on the lower slopes. This will leave the pistes as ribbons of white against the grass and rocks – which has been one of the emblematic sights of winter 2016-7 so far.

The picture below was taken by one of our editors in Ischgl today, in cold sunshine and on hard-packed pistes. The resort has some of the best cover of any non-glacial resort in Austria at the moment. 187km of pistes are open. 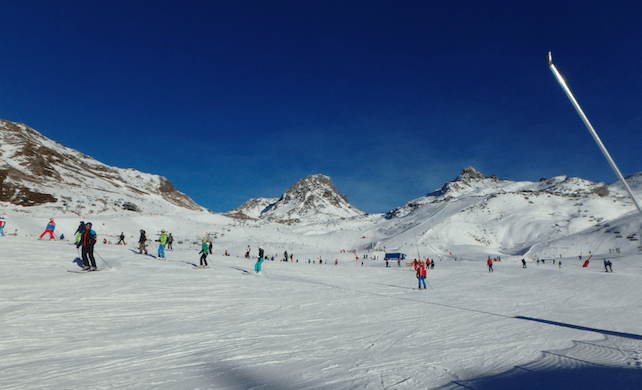 Meanwhile, in the central, western and southern Alps, the sunshine will continue unabated. It’ll be mild too. Tomorrow in France the daytime freezing point to be at 3000m for much of the day – which is higher than the top lift in many ski areas.

In other words, for much of the region, the snow-cannon Christmas continues; and it’s almost certain to be a snow-cannon New Year. So far this winter, most resorts have been relying heavily on their snow-making machines and their piste-grooming crews, and in the east especially (where it’s generally been colder), they’ve been able to make prodigious quantities of the stuff. I’ve mentioned the union of Italian resorts known as the Dolomiti Superski before: but its achievement in the face of an almost snowless start to winter really has been extraordinary. Currently, over 950km of its pistes are skiable.

Here’s how it’s looking above Canazei, in the Val di Fassa. 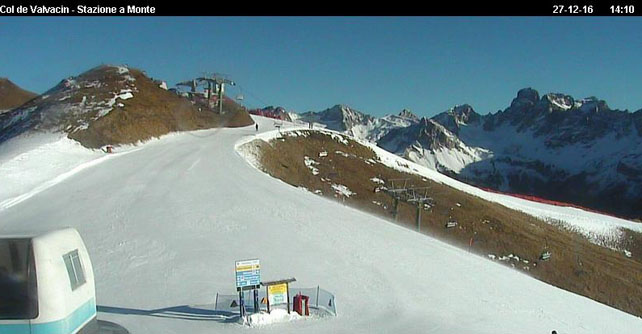 The one notable exception to the snow-cannon rule comes from the south-western Alps, which saw heavy snow at the end of November and 20-30cm last week. Here, the scene is much more wintry, as you’ll see from this webcam shot of Bardonecchia in Italy. 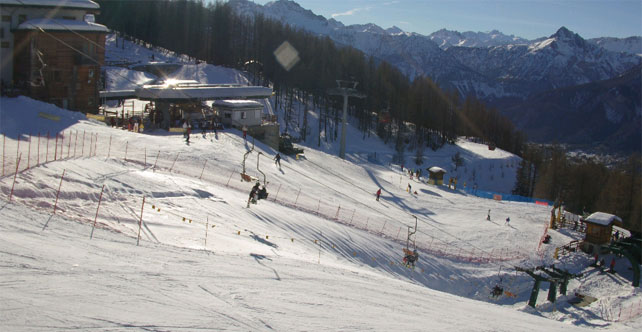 Meanwhile, pictured below is how it’s looking on the Solaise above Val d’Isere – close to the Italian border. Val d’Isere is one of a handful of high-altitude resorts which held onto the snow that fell in early November, and got more in late November and mid-December too. Others include Tignes and Cervinia. 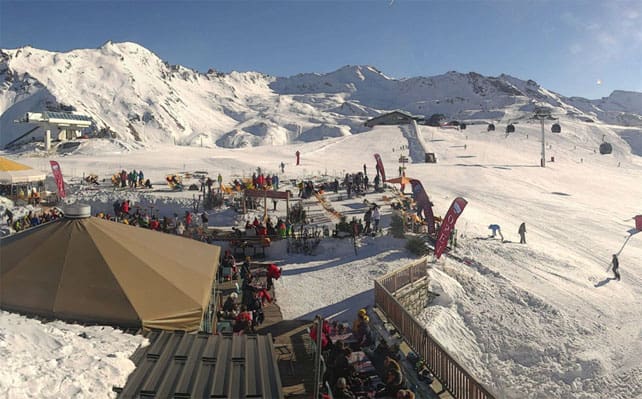 There’s a chance of more widespread snow next week

When will this long dry spell finally break? Next week there’s a chance of more widespread snow: although it’s not yet certainty, and an area of high pressure will never be far away. In fact, this pesky anticyclone could yet hold off change until w/c January 9.

According the European Centre for Mid-Range Forecasts, Tuesday January 3 offers the best chance of widespread snow. 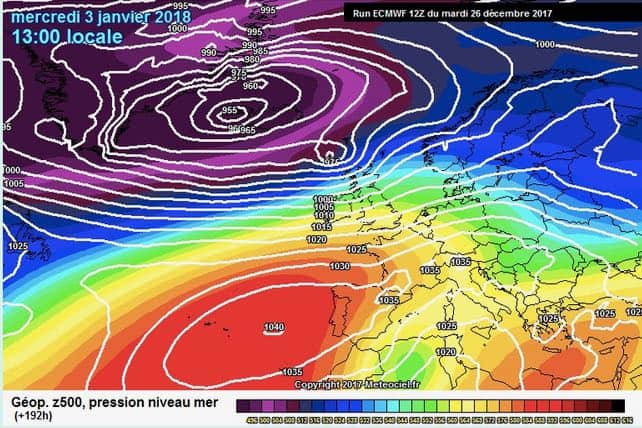 However, this forecast also predicts more mild sunny weather to follow. It’s also worth bearing in mind that other mid-range forecasts are currently showing different outcomes.

In the short term, anyone in the market for deep powder snow should head across the Atlantic. In the American Rockies especially, December has been super-snowy month. The fact that the November that preceded it was so mild and dry has made it all the more miraculous.

This was Jackson Hole, Wyoming, on Christmas Day (the top of the ski area has had six metres of snow already this winter). 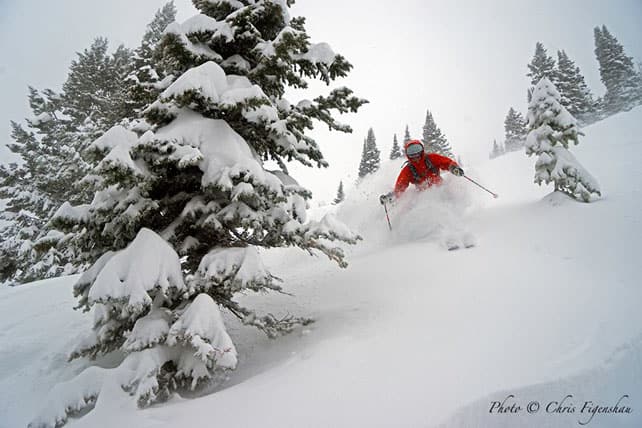 And this was Snowbird in Utah (where four metres of snow has fallen so far this season). 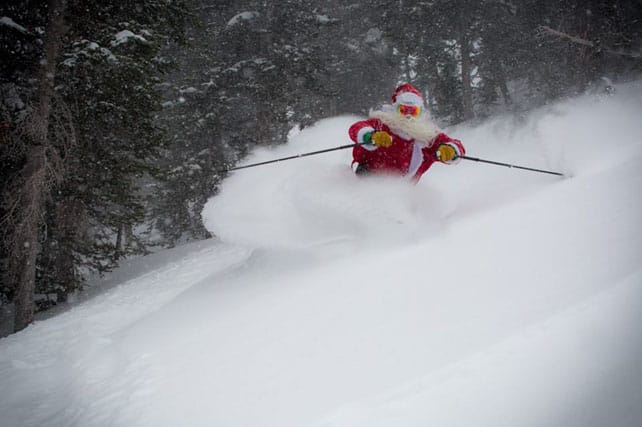 Now the action has shifted north-west for a while (Whistler is expecting 20-30cm of snow over the next three days). But more heavy snow is forecast for the American Rockies next week.

One Response to “Some Fresh Snow in Austria: But the Rest of the Alps Must Wait”