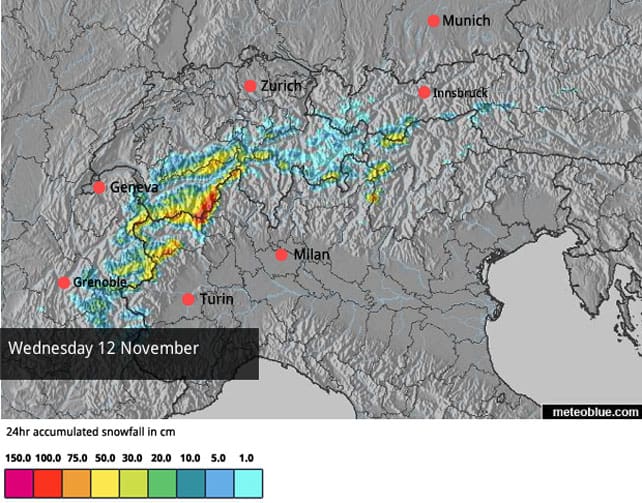 The dry, sunny days of early autumn are now a fading memory in the Alps, as another spell of wild weather rolls across the region. Once again, the southern and western sectors will see the heaviest precipitation, and most of it will fall as rain. But up high there’s going to be another dump of snow, and again it’s going to favour the area around Cervinia, Saas-Fee and Zermatt – as it did last week.

As you can see from this murky shot of the Plan Maison mid-station above Cervinia, the weather’s already settled in, and 15cm of fresh snow is reported up high so far. That’s on top of the 110cm that fell last week, transforming conditions in the resort, and allowing for the opening of several pistes at the weekend. 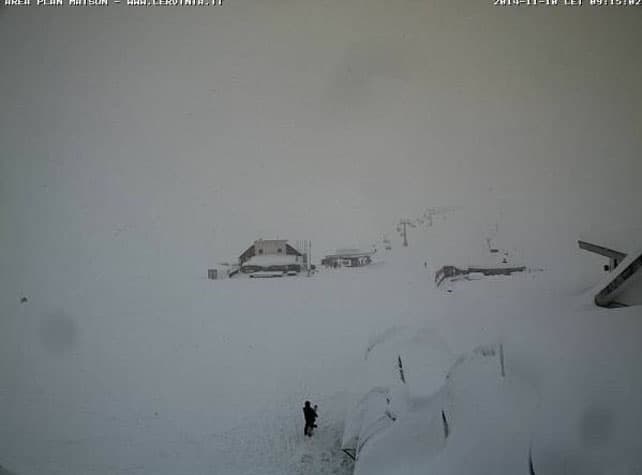 Below is another indication of how the snow is stacking up in the area – courtesy of a photo taken above Saas-Fee at the weekend, when the sun was out. The resort opened pistes down to the Morenia mid-station to celebrate. 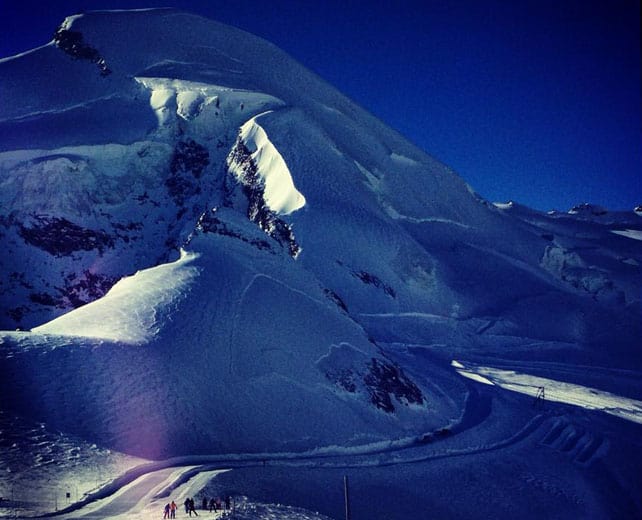 The area around the Matterhorn and Monterosa wasn’t the only place to get snow last week. The Grande Motte glacier above Tignes got about 20cm of snow from the same storm, according to the latest video snow report from British ski school Snoworks, posted on Friday.

Meanwhile, in Austria, the Hintertux glacier reckoned on 25cm of new snow last week, and the Pitztal glacier, a little further west, had 44cm, bringing its autumn total to 204cm so far.

Another indication of good conditions at altitude is the fact that Verbier opened up the Lac des Vaux piste for a winter preview at the weekend – and there was enough snow to ski off-piste, as you’ll see in the (French language) video below. Weather allowing, the lifts will be spinning here each weekend before a full-scale opening on November 26-27.

The next significant event in the Alpine calendar is the opening of Obergurgl in Austria on Thursday, November 13. This will be the first ski area without glacier pistes to open, full-time, for the winter. Judging by photos posted at the weekend, it’s already in decent shape, with up to 60cm of over on the higher runs. 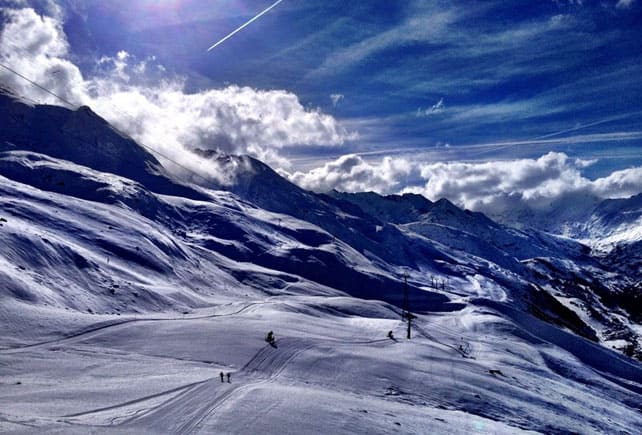 Looking ahead: rain, snow – and lovely skiing on the glaciers

For the next two days, it’ll be raining at all but the highest altitudes, and it’s going to feel pretty soggy at village level, even in high-altitude resorts. However, on Wednesday and Thursday, the freezing point will sink to 1700m in Austria and 2000m in France, so the snow will be more widespread for a time – before the weather warms up again at the weekend. Check out our snow forecast for the Alps for details.

What does all this add up? Well, it’s not been a cold end to the autumn so far in the Alps: but on the highest slopes, there are exceptional amounts of snow. So whenever skies clear there’s going to be lovely skiing on the glaciers. Check out our guide to the best resorts for early-season skiing for more guidance on where to go before Christmas.

Oh yes, and the party season has already started… 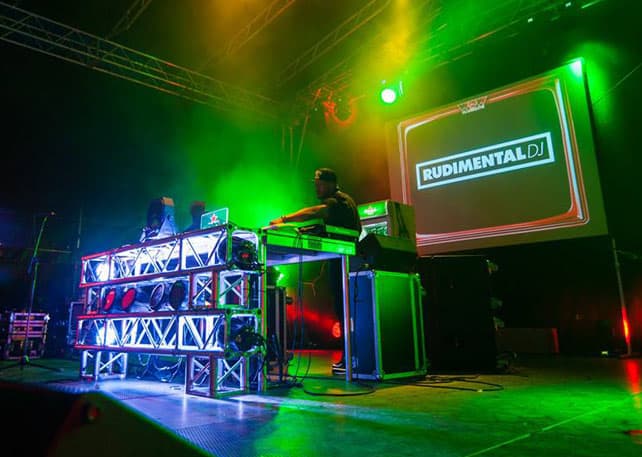 Pictured, above, was the scene in Kaprun on Saturday, on the closing night of its Wow Glacier Love event on the Kitzsteinhorn glacier.

Fans of Rudimental, as well as mountain music festivals, might be interested to know that the band is one of the headlining acts at Snowbombing in Mayrhofen in the spring…

In the American Rockies, winter arrives at last 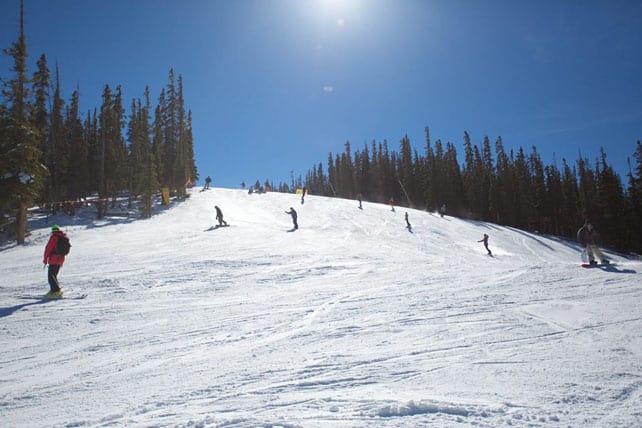 In Colorado, both Keystone and Copper Mountain opened for the season on Friday, a week later than planned. Keystone had 50 acres of terrain on offer and Copper was running a couple of lifts and six trails. Both openings were fairly muted affairs, because so far the autumn’s been exceptionally mild in the Rockies.

Thankfully, that’s all about to change. A cold front is moving south towards Colorado, and local forecaster Joel Gratz is predicting three waves of snowfall over the next seven days. Each one will be fairly light: but together they could add up to 30cm in places. Resorts will be able to run their snow cannons both day and night as well, and get a decent layer of man-made snow on the most popular trails, too. According to Gratz, it’s not going to make up the current shortfall in snow cover, but it’s a big step in the right direction. Hopefully, it’ll get Breckenridge’s opening day back on track, too. The big, buzzing Colorado ski town was due to fire up its lifts on November 7, but had to postpone because of the warm weather.

Another ski area which has had to postpone its opening day was Lake Louise, in Banff National Park. Like Breckenridge in Colorado it was due to open on November 7, but mild weather has been problem in the Canadian Rockies, too, and the date has been shunted back to November 13. There was fresh snow there yesterday, and a significant drop in temperature, so there aren’t likely to be any more delays.

Here’s how the base lodge was looking yesterday lunchtime. 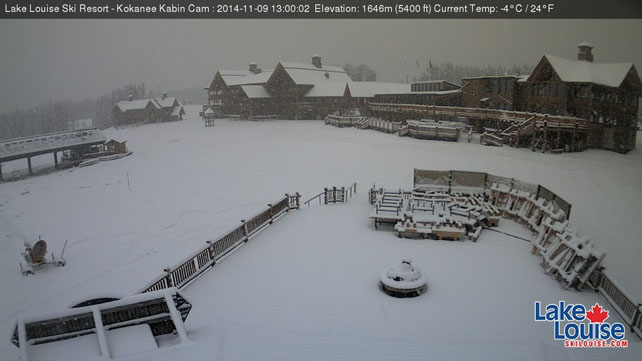 Meanwhile, pictured below is the snow stake at neighbouring Sunshine Village, just after midnight, showing 15cm of new snow. 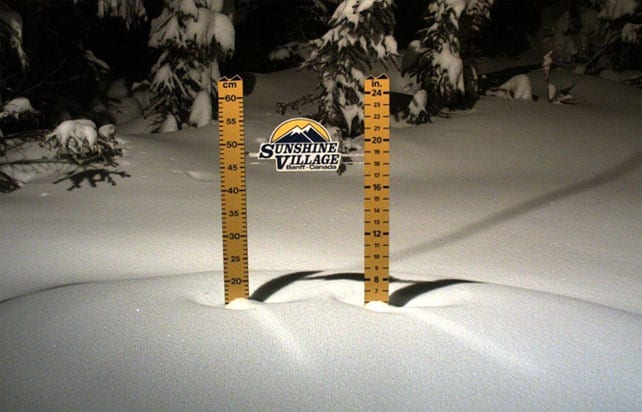 No Responses to “Snow Report, November 10”