Are you looking for snow? We’ve got snow…

There’s been more heavy snow in the high Alps 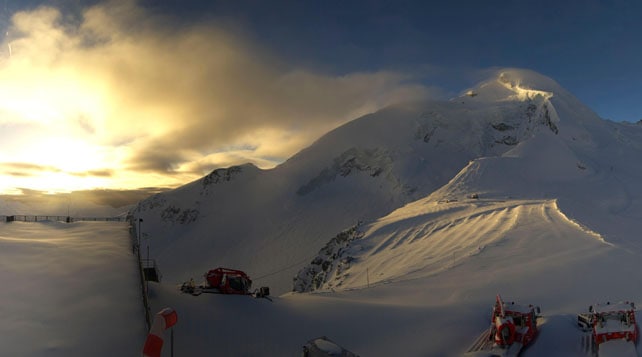 Pictured above was sunrise this morning above Saas-Fee in Switzerland, which has seen another enormous dump at altitude this week – on top of all the snow that fell last week. “We’ve had about two metres of snow,” the tourist office said this morning. “What, in the last two weeks?” I asked. “No, in the last two days,” was the reply (although I think that’s an estimate, rather than an exact measurement).

Not surprisingly, the pistes on the glacier are all closed because of the avalanche risk: but once the blasting has been done, there’ll be skiing down to the mid-station again at the weekend – weather permitting.

Meanwhile, pictured below is Cervinia in Italy. Yesterday afternoon it reported 40cm of new snow, on top of the 110cm that fell on the highest pistes last week. There’s doubtless been more overnight. Weather permitting, you can ski over to Zermatt in Switzerland from here, and now that skies have cleared, it’s obvious conditions are superb. It’s worth noting that below 2500m however, the cover is wet and heavy – an indication of how mild it still is across the region. So you’ll need to stay high to get good snow. 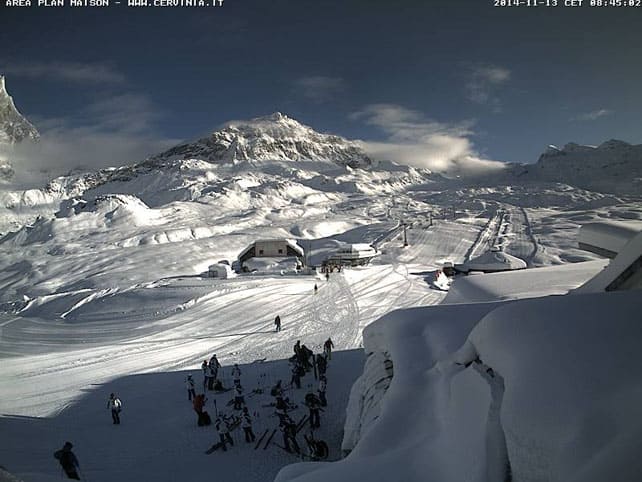 Pictured below is the Grande Motte glacier above Tignes in France. Here too, there’s been more snow, although not in the same quantities as in the Cervinia/Zermatt/Saas-Fee area. Five pistes are currently open here for skiing.

Pictured below is how it’s looking at Obergurgl in Austria this morning. The resort opens today, full-time for the winter season, although the valley runs down to Obergurgl won’t be open yet. There’s up to 60cm of settled cover, on piste – and hopefully, the skies will clear this afternoon… 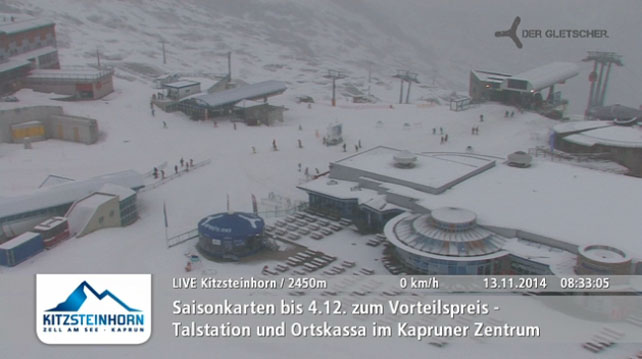 One key point about the white stuff this week: in most places, the snow has only fallen above about 2000m, and it’s only cold and wintry above 2500m. Lower down, there’s been rain – so most pistes, in most resorts, are still pretty green. That’s fine: most resorts won’t be opening for another month. But it’s worth stressing, again, that you need a lot of altitude in your plans if you fancy skiing in the near future. Check out our guide to the best resorts for early-season skiing for advice on where to go for a pre-Christmas trip.

More white stuff is on the way 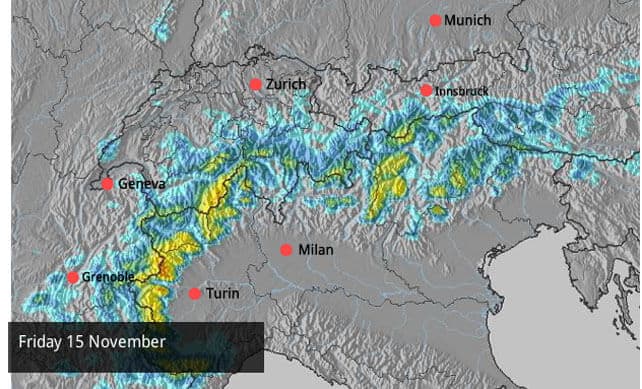 Check out our snow forecast for the Alps for Saturday, November 15. The maps look good for Monday and Tuesday too, as temperatures drop temporarily. French forecaster Meteo Chamonix reckons the freezing point could be down to 1500m on Sunday, before rising back to 2400m on Wednesday. So a lot more of the mountains will be looking white for a time, before the snowline creeps back uphill again.

The American Rockies have had snow, too 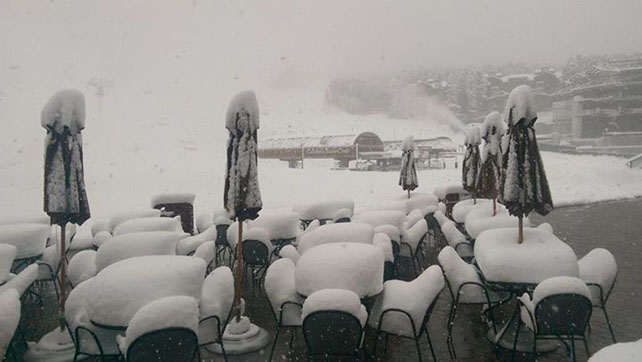 Pictured above was the scene in Breckenridge, Colorado, yesterday afternoon. The resort had to postpone its opening day last week, as a result of a long run of mild weather in the Rockies, but it’s definitely opening on Saturday. The new snow is a great curtain raiser and – according to local forecaster Joel Gratz – there’s more on the way. In fact, the weekly total in some Colorado resorts could top 70cm by Monday. All this new snow won’t correct the overall shortfall so far this autumn: but it’s a big step in the right direction.

Meanwhile, here’s the snow stake yesterday evening in Beaver Creek, Colorado. The resort reports a total of 48cm of snow in the last three days, and is due to open on November 26. 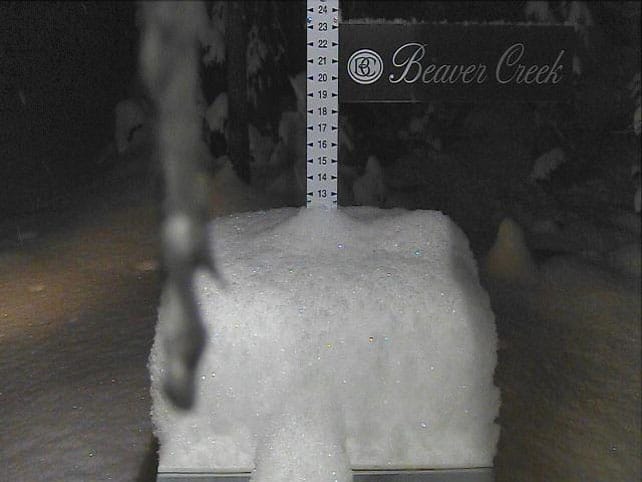 And this was the scene at the top of Jackson Hole, Wyoming on Monday, when the resort had 27cm of snow. Jackson Hole is due to open on November 27. 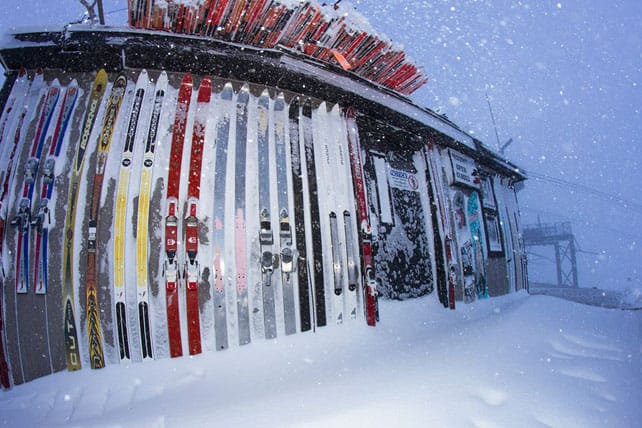 It looks as though the run of cold weather could continue in the Rockies until the middle of next week. 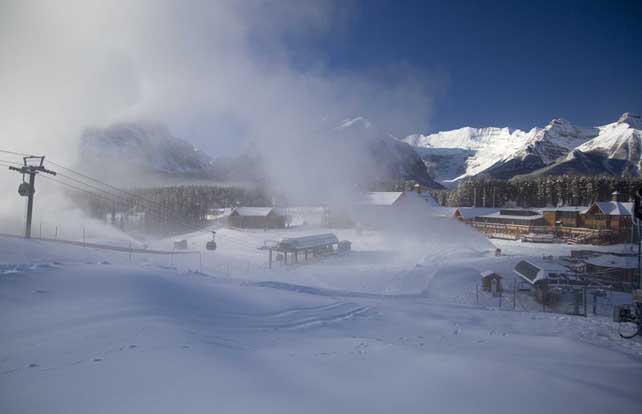 In the Canadian Rockies, mild weather forced Lake Louise to postpone its opening day last week. But it’s back on track now, thanks to a cold snap and fresh snow at the beginning of the week. The lifts start running today. Its neighbour, Sunshine Village, will get going tomorrow, with up to 62cm of settled cover on its slopes.

No Responses to “Snow Report, November 13”