Up to a Metre of Snow in the Alps 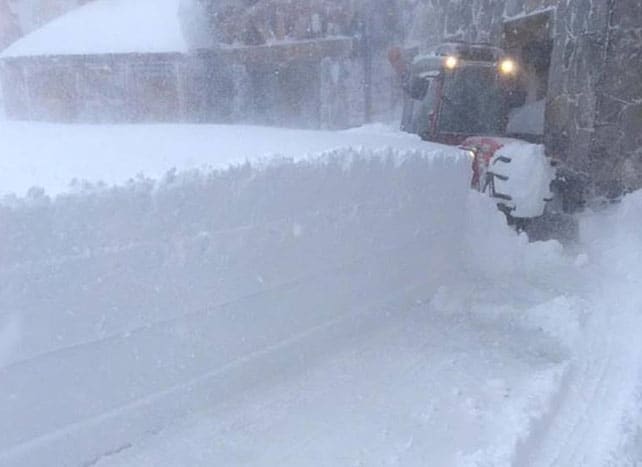 A metre of new snow at the top of Tignes this morning. Photo: Panoramic Restaurant Tignes/ Facebook

At last! The Alps have just had their first proper, top-to-bottom winter preview. In the west, up to a metre of a snow has fallen in the last 48 hours, and it’s still snowing in Austria and Italy as I write.

What’s more, it’s COLD. It has, for example, been snowing at resort level in the Skiwelt today – settling down to 700m in places. This was Ellmau earlier this afternoon.

The goods have been widely distributed too. To give you an idea of how much has fallen, here’s yesterday’s snow forecast… 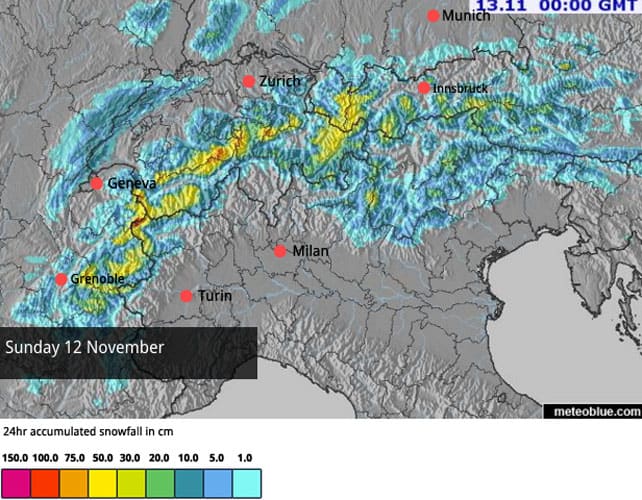 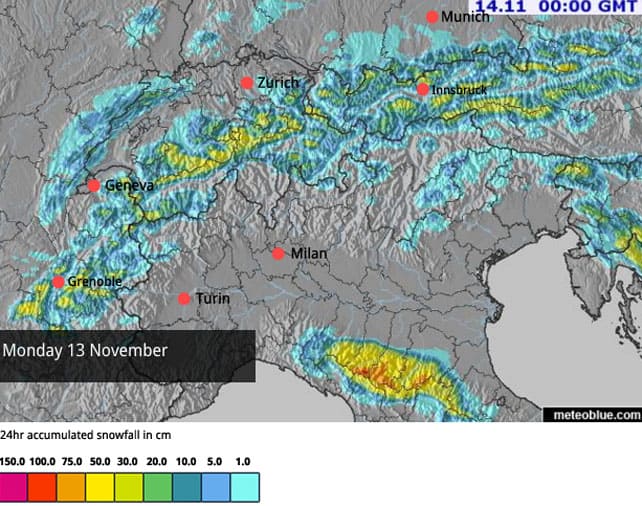 We can’t start talking just yet about an early start to winter. It’s only November 13. High pressure is in the forecast from Wednesday, and then – in classic Alpine fashion – the daytime freezing point is going to fly back uphill. Come Friday, it’ll be at 2900m in Austria, and 2500m in France.

But, and this is an exciting but, it looks as though the weather may repeat itself next week. It’s too soon to be sure, but next Monday’s forecast from the ECMWF is looking similar to today’s chart, and we could get another cold snap on November 20. What’s more, the current prognosis is that next week will stay cool after the snow, in contrast to this one. 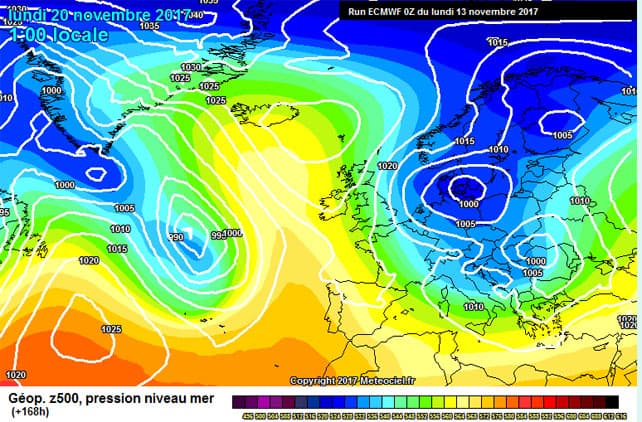 And even if the cold snap doesn’t materialise, the high-altitude resorts are going to be in great shape as a result of this new snow. Tignes reckons on a metre of the white stuff has fallen on the Grande Motte’s glacier, which is a big boost for its early-season skiers. What’s more, it’s expecting to open its Double M piste on Saturday, so you’ll be able to ski all the way back down to resort level.

Val Thorens opening on Saturday as well, and says that 70% of its lifts will be operational, so you can see why everyone is beginning to think we’ll buck the trend of the last three seasons. But let’s wait for the November 20 storm to materialise before we start sounding the trumpets… 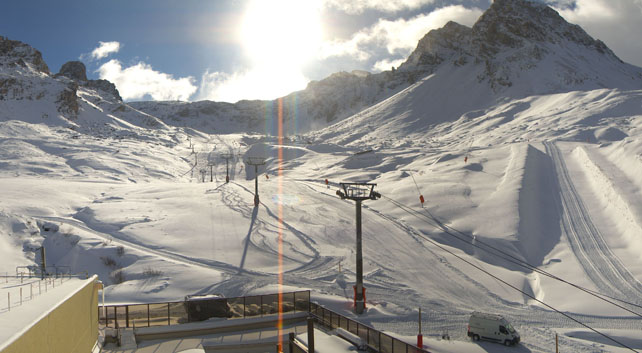 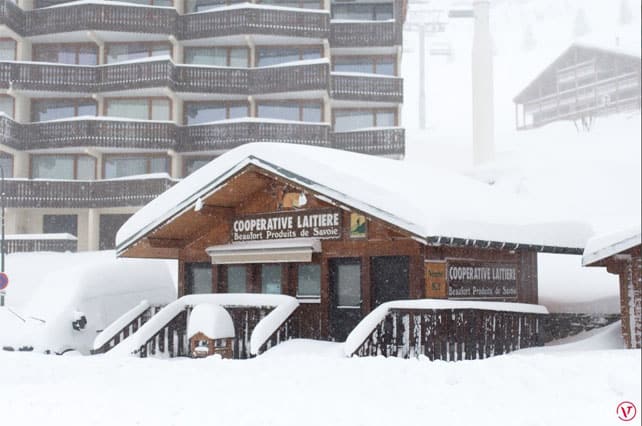 And this was the snow settling down in the valley at Ischgl. Down here, it’ll be gone by the end of the week, but the resort will make good use of the snow higher up in preparation for its season opening on November 25. (It also has 1,100 snow cannons, which will working flat out, too.) 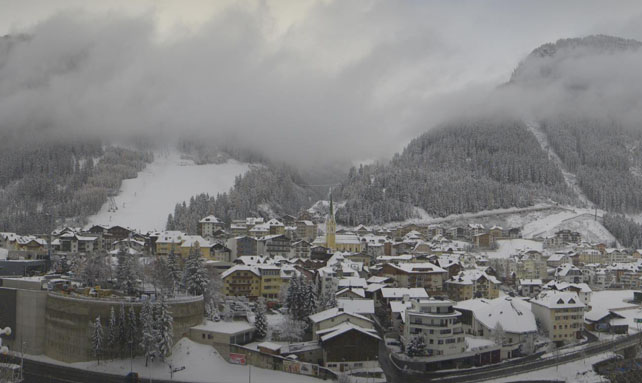 Snow was also settling down at resort level in Val d’Isere this morning. Val also opens on November 25. 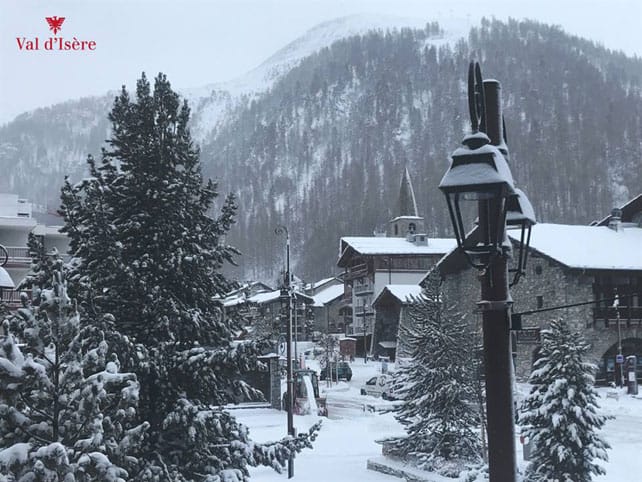 And this is Carezza, near Moena in the Italian Dolomites. The Dolomiti Superski – home to some of the world’s best snowmaking – is having a bit of help from Mother Nature this season. A handful of pistes opened there on Saturday, and more skiing will be on offer from November 25, at the latest.

Check out our guide to early-season skiing for more ideas about where to take advantage of an early start to winter. And don’t forget there’s already plenty of skiing available if you know where to look – for example, on the Hintertux, the Stubai, Pitztal, Kaunertal, Rettenbach, Motttal, and Kitzsteinhorn glaciers, as well as those above Saas-Fee, Zermatt, and Les Diablerets in Switzerland. In Italy you can also ski in the Schnalstal and Cervinia.

New resorts are opening up across the pond, too. In Canada, Lake Louise got going last week, as did Mammoth in California and Breckenridge in Colorado. None has had a really meaty snowstorm yet – but change is in the air, and a low pressure system is muscling into the Pacific Northwest. It’s already brought snow to Whistler, which could get a metre of the white stuff as a result of the storm. If it does, we may see the resort bring its opening day forward from November 23.

Here’s how it looks there as I write. 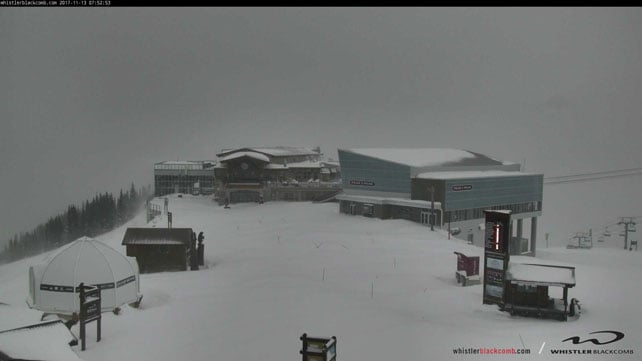