5 Tips For Surviving a Ski Holiday Without Brilliant Snow 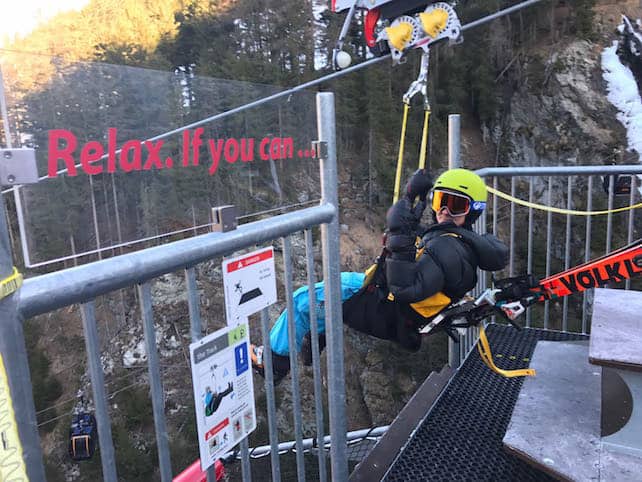 Considering the lack of snow in the rest of Austria and most of the Alps over Christmas and New Year, it was remarkable that our holiday in Ischgl had some pretty good skiing overall. In fact you could even ski back to our hotel, the Abendrot in the centre of town, and all the way down to Samnaun in Switzerland.

Ok, the drought – in Austria, at least – is now over. But (and it’s a big ‘but’) there’s always next Christmas to consider.

So here are five tips for making the most of an early-season ski trip at a time when the first big dump of the winter may have failed to materialise: 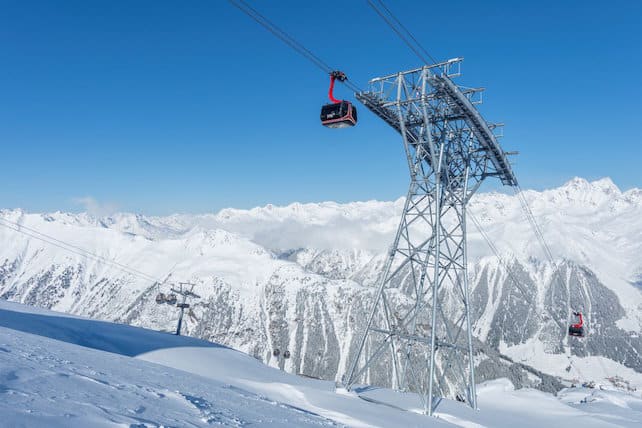 Yes, you can go to Val d’Isere–Tignes, Val Thorens, Solden and Hintertux – or even Zermatt if a maiden aunt has unexpectedly just left you a fortune. But there are other high resorts worth considering. Ischgl clocks in at 1400m in the valley – that’s twice the height of Soll – the altitude is 2864m at the top station.

Don’t make the mistake of comparing the height/snow graph in Austria with that of France. As you head east the mean snow level drops, a point that Napoleon failed to appreciate. Moscow (156m) is buried in snow all winter.


Go somewhere that has abundant snowmaking 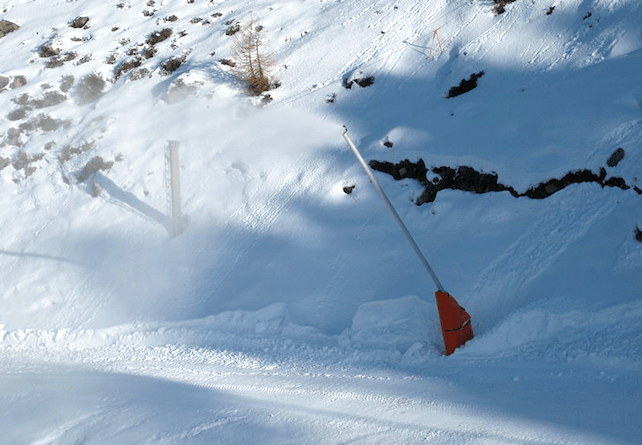 Ischgl is famed for having one of the most sophisticated snowmaking operations in Europe. It was cold enough for its 1,100 snow-cannons to work at full blast and the resort did an amazing job over the Christmas week. On Christmas Eve and Christmas Day the slopes were blissfully empty, we cruised for miles on beautiful packed powder without a pebble in sight. We also managed to find tables in the most popular mountain restaurants without any trouble at all.

But as the week went on, more and more (mainly Dutch, German and Eastern European) skiers arrived for New Year. Their numbers were swelled by the almost complete absence of skiing in many of the lower resorts.

By the end of the week the artificial snow was being tested to capacity. Even the sharpest edges struggled to hold – and you really had to watch out for other skiers sliding out of control around you. It helps to be on a pair of decent skis – we rented ours from Intersport Brundl in the high street and they had a good choice of skis for all conditions.

Choose a resort with excellent grooming 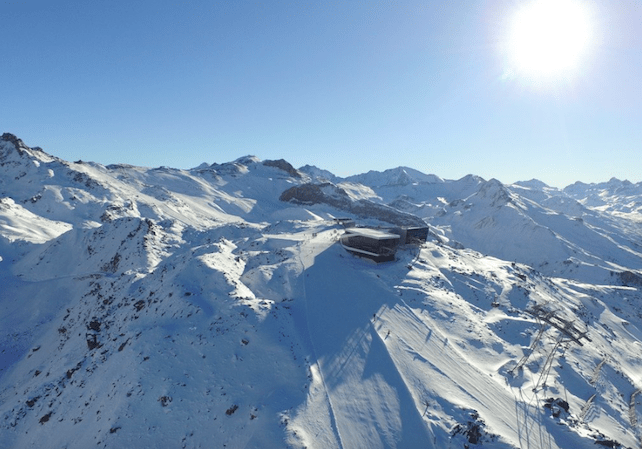 Moguls are a rarity in Ischgl, as our ski instructor proudly pointed out. In all but a couple of designated areas every bump is flattened every day. You won’t find yourself on a slope covered in people gingerly trying to slide down icy moguls with the snow partly scraped off them.

Some of the best skiing is at Palinkopf, the ski area’s high point, reached by chair-lifts from Idalp. Long red and black runs sweep down into the Fimbatal at the edge of the ski area. The black runs (which would be reds in places like Verbier, St Anton or Val d’Isere) are usually quiet, even during high season. There were lots of occasions when our family of five were the only skiers sweeping down a great run like the 14a.

Find a place with some good restaurants 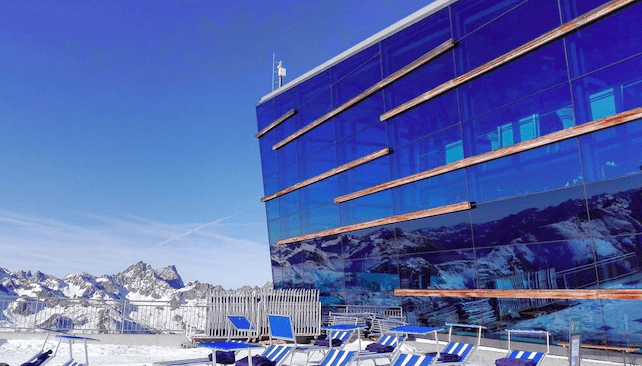 We liked Paznauner Thayer, a wayside hut with a glass igloo as an overflow. The downstairs self-service is wood-clad and atmospheric just like the table-service eatery upstairs – with the food very nearly as good and quite a bit cheaper.

Then there’s Pardorama, the futuristic looking glass restaurant at 2624m. Again, if you can’t get a table upstairs in the table-service area, don’t despair. The self-service has decent food too. On the Swiss side we ate at Skihaus Alp Trida, where prices are kept as low as on the Austrian side of the mountain. In town, our favourite was Lucy Wang, a stylish sushi bar across the road from our hotel.

Try a resort where there’s more than just skiing 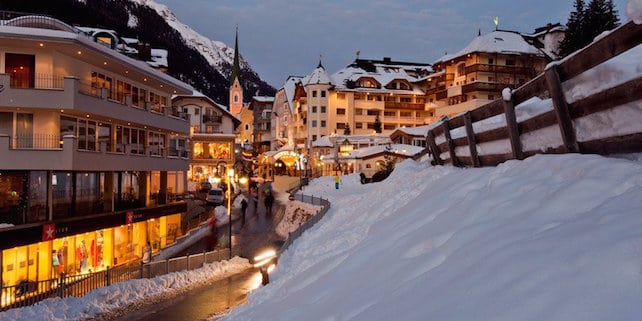 Ischgl has lots of alternative activities – starting at our comfortable Chalet-Hotel Abendrot, which has a nice wellness area complete with saunas and a steam room. In town there’s an indoor tennis centre, paragliding, ice-skating, winter hiking, snowshoe trails, and cross-country skiing.

There’s also a lot of apres-ski in Ischgl: in fact the resort is famous for it, starting and ending the season with the Top of the Mountain concert that has attracted some big stars over the years – such as Robbie Williams, Sting, Kylie Minogue, James Blunt, Bob Dylan, and the Beach Boys. But that’s just for two days of the season.

On the others our instructor recommended giving the so-called Golden Apres-ski Triangle (Kuhstall, Feuer und Eis, and Hollboden) a wide berth because: “When people go in, they never come out again”. There’s also a Pacha, three lap-dancing clubs, and plenty of places for an apres-ski drink – such as Schatzi’s at the bottom of the piste. We found Trofana Royal, Ischgl’s top five-star hotel to be a good place for peaceful pre-dinner cocktails at not unreasonable prices. 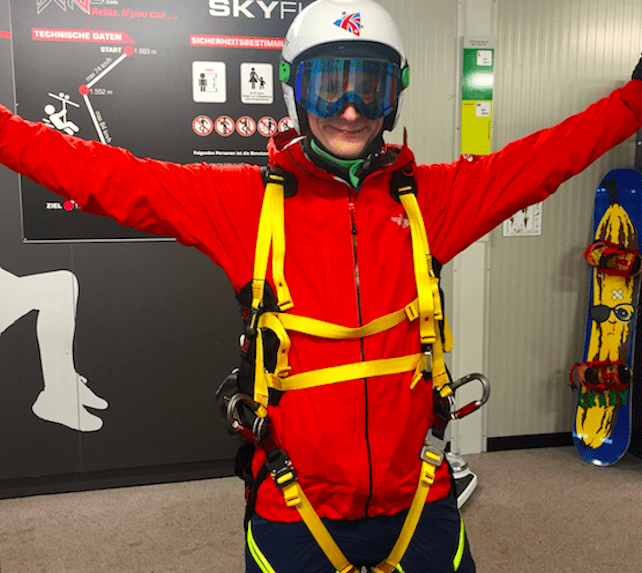 New for this season is Ischgl Skyfly, a 2km-long three-stage zip-wire which starts at 1683m outside the mid-station of the Silvrettabahn gondola. If you’ve skied to get here then you take your gear down with you. You wear your boots, helmet and goggles, whilst your skis and poles are strapped onto your back on a kind of luggage rack.

You wear a climbing harness and are handed a heavy metal pulley to carry. With all of this attached, you clamber up four flights of metal steps to the start tower. Your pulley clips on to the cable, and you’re good to go.

It’s an exhilarating experience flying down the mountain, over treetops and through a gully at 85kmph, across a piste and finally landing on the roof of the 3-S Pardatschgratbahn cable-car at 1376m. The whole process takes about 45 minutes and costs 39€ a go for adults, 21€ for children. It’s open to anyone over eight years old, with a weight range up to 125kg.

Two cables run parallel, so you can try racing your companion – make sure you’re roughly the same size because the heavier person will win! 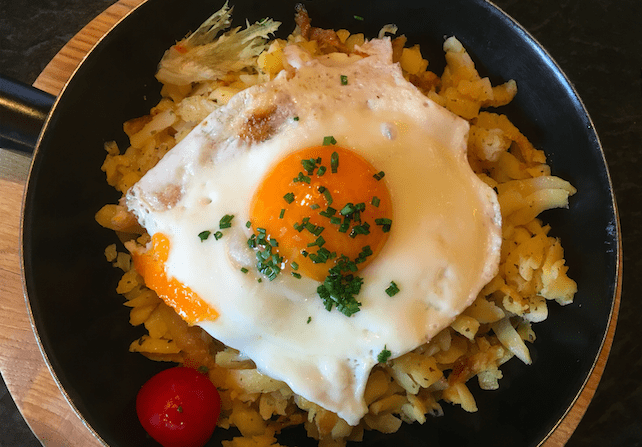 Ischgl is linked with Samnaun in Switzerland’s Engadine, which gives you a variety of terrain and the chance to find some quieter pistes when the main area gets crowded.

Be sure to leave plenty of time to get back to your ‘home’ resort though. The last bus from Samnaun to the cable-car departed at 15.15pm when we were there. After that, there’s a cable-car ride followed by a chair-lift to get back to Ischgl again. One day we only just made it home after a prolonged Swiss lunch. 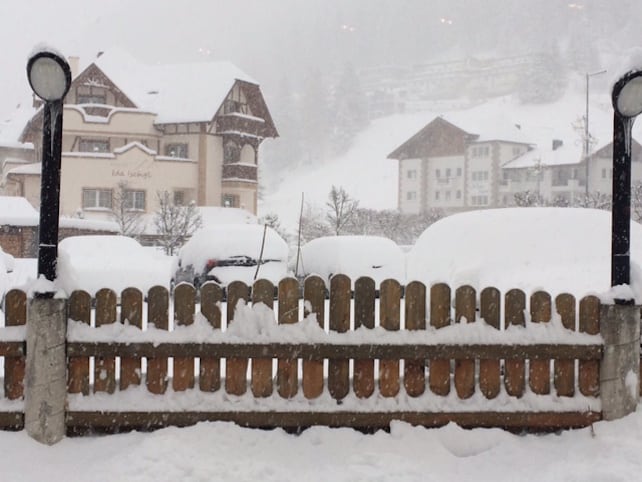 You can’t always expect the best conditions at Christmas, but stay high to maximise the possibility of decent snow. Study the snow reports before you go, take your swimming things, and be prepared for some long lunches.

And look how quickly everything changes! Pictured above is the view from the window of the Abendrot at breakfast time today…

Max Hardy and his family stayed at Chalet-Hotel Abendrot in Ischgl, which is run by Ski Total with British staff. It sleeps 52-63 people half board, including a chalet tea after skiing that’s big enough to replace lunch if you want, and picnic lunches can also be provided each day. The No 1 red run conveniently brings you back to within 50m of the hotel. Prices from £794pp for a week this April, including flights and transfers. Next Christmas it will cost from £1,234pp for a week.

Ski hire from Intersport costs an average of €62pp per week, and you can swap your skis as often as you wish throughout your stay.