Where Can I Ski Now? 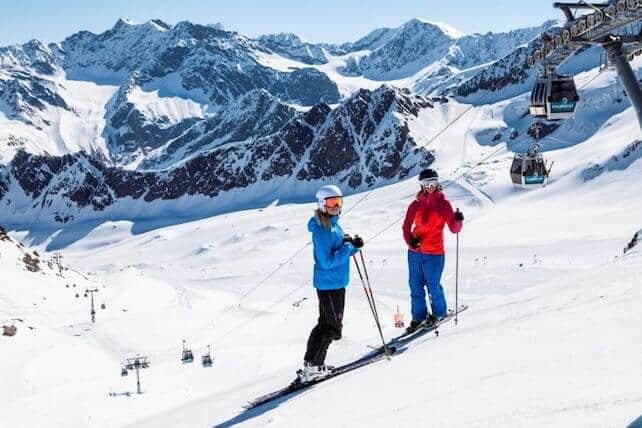 Left it late but thinking you might like a cheeky weekend – or week – on snow? You can expect long sunny days but, as the warmer temperatures mean that the snow becomes soft and slushy by midday, you’d be wise to get up early and catch the first lift. Remember to wear a high factor suncream and to reapply it as often as possible so that you don’t sizzle in the sun.

The main tour operators have finished their winter programmes, but the tailor-made companies such as Snow-Wise, Snowfinders, and Momentum can put together packages for you.

Here are 29 resorts where you can you enjoy the very last days of the winter season: 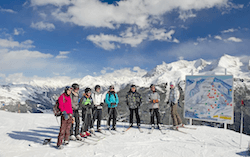 The lifts here don’t close as there’s skiing on 365 days a year. The winter season officially ends on May 13, but in summer you can join a race training clinic to improve your skiing with either Austria Racing Camps or Fischer Racing Camp.
Stay: Four-star Sporthotel Vital Central in Tux, 7km from the skiing.
Nearest airports: Innsbruck and Munich.

Lifts are open in Ischgl until May 1. The Top Of The Mountain winter season closing concert is headlined by Muse on April 30.
Stay: Hotel Yscla, which is a stylishly-decorated hotel in the centre of town.
Nearest airport: Zurich. 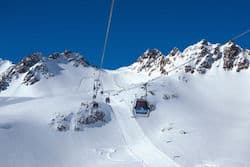 Lifts on the glacier open until May 29, then closed until September 19. The ski area is little known outside of Austria, but it has 32.5km of piste.
Stay: Four-star Hotel Weisseespitze in the unspoilt Kaunertal.
Nearest airports: Innsbruck and Munich. 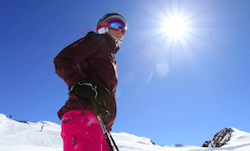 Runs on the Kitzsteinhorn glacier are open until July 24, with lift-serviced skiing up to 3030m. The lifts then re-open in late September.
Stay: Active by Leitner’s Style Hotel two minutes from the summer ski area.
Nearest airport: Salzburg. 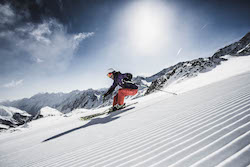 The lifts remain open on the Stubai Glacier until May 29.
Stay: there’s a special offer where you stay four nights and pay for three, from €260pp, including a lift pass.
Nearest airports: Innsbruck and Munich. 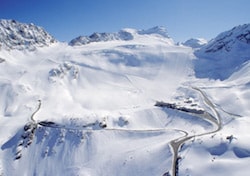 The resort’s main lifts stay open until May 8. In summer, the 10 lifts on the Rettenbach and Tiefenbach glaciers open up from June 20 to September 20, serving 34.5km of piste.
Stay: Five-star Das Central or B&B at three-star Hotel Garni Schönblick.
Nearest airports: Innsbruck and Munich.

Lifts up on the Grands Montets are open until May 1. On that day there’s an end of season party called Freeride Day, with a special one-day lift pass available for 12€.
Stay: Three-star Hotel de la Couronne is great value for money.
Nearest airport: Geneva. 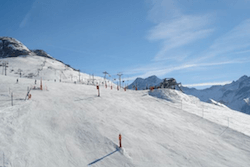 The lifts here remain open until April 30. The glacier then re-opens for summer skiing from June 18 until August 27. LDA has been operating as a ski resort since the 1950s, making it one of the oldest French ski resorts – second to Chamonix.
Stay: Chalet Mounier, which was a mountain refuge and alpine farm back in 1879.
Nearest airports: Lyon and Grenoble. 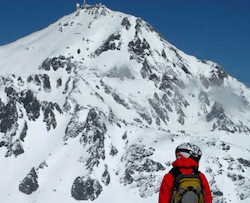 You can ski down from the Pic du Midi in the Hautes-Pyrenees until May 1, and then it will be closed from May 2 to 28. However it may well open again at the end May…if conditions are right.
Stay: For something a little different, spend the night in the hotel attached to the Pic du Midi observatory.
Nearest airports: Pau and Lourdes Tarbes.

Lifts are still running for the winter season until May 6 and then the summer skiing goes from June 25 to August 7. There are 20km of pistes on the glacier, including a snowpark, cross-country skiing…and you’ll be able to sunbathe on the terrace of the Panoramic restaurant.
Stay: Residence La Ferme du Val Claret, which is convenient for the glacier.
Nearest airports: Geneva and Lyon. 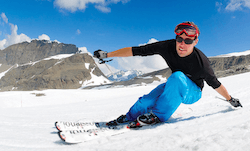 Lifts close on May 1 for the end of the winter season and then open again from June 12 to July 17. One of the advantages of summer skiing here is that you can drive to the foot of the slopes.
Stay: The new five-star hotel Le Yule.
Nearest airports: Geneva and Lyon.

The lifts remain open until May 8. In summer, pedestrians and mountain bikers can explore the area with the Evasion 3 Vallées pass, which accesses all the lifts that are running.
Stay: Hotel 3 Vallees, which has everything from single bedrooms to studios with kitchens.
Nearest airports: Geneva and Lyon. 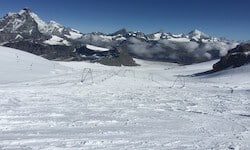 Lifts close for the winter season on May 1. In summer the resort opens at weekends in June, and then full-time in July and August.
Stay: Hotel Principe delle Nevi, which is one of our favourite hotels in the resort.
Nearest airports: Geneva and Milan. 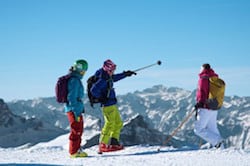 The lifts closed on April 10, but there are special off-piste days on April 23-25 and 30, and May 1. The Stafal-Gabiet-Salati-Indren lifts will be open and the Salati, Olen, Bodwitch and Cimalegna pistes will be maintained over this period.
Stay: Hotel Jolanda Sport, which has an indoor swimming-pool.
Nearest airports: Turin and Geneva. 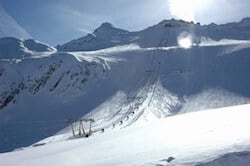 Lifts are open on the Presena Glacier until June 5. The skiing rises to 3069m with 10 lifts.
Stay: Hotel Mirandola is an old hospice up the mountain, which has been converted into a lovely boutique hotel.
Nearest airport: Milan.

The lifts stay open until May 22. There is a free shuttle bus that drops you at the lift station from almost every hotel in the resort.
Stay: The cosy Ski Lodge Engelberg.
Nearest airport: Zurich. 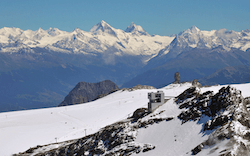 Lifts are open on Glacier 3000 until May 8.
Stay: Hotel les Sources, which is 400m from the ski slopes in Les Diablerets.
Nearest airport: Zurich.

The lifts are now closed for the winter ski season, but the glacier opens for summer skiing on July 16. Ski-touring is still possible until that date.
Stay: Three-star Hotel Alpi, which has a fitness room and wellness centre.
Nearest airport: Zurich.

Lifts remain open on Corvatsch until May 1 and on Diavolezza until May 22.
Stay: Berghaus Diavolezza is up at 3000m with panoramic views.
Nearest airports: Zurich and Milan. 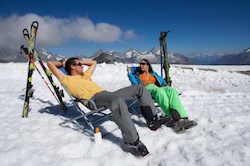 The main lifts are now closed for the winter season, although the glacier is still open. The glacier closes in the first two weeks of May and then re-opens for the summer season, although there is always one lift running.
Stay: Chalet Ulysse, five minutes’ walk from the Matterhorn Express gondola.
Nearest airports: Geneva and Zurich.

The last of the lifts close on May 1 in the resort that is 354km from the Arctic Circle.
Stay: Holiday Club Hotell has a central location in Are, with a waterpark, spa, bowling and lots of other activities.
Airport: Are Östersund Airport or Trondheim. 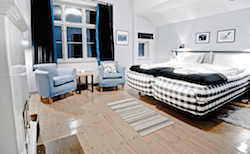 Lifts stay open until May 22. The resort is located 200km from the Arctic circle, and provides the world’s most northmost skiing. The heli-skiing here opens up a choice of 100 different peaks.
Stay: Meteorologen Ski Lodge, which is an old customs building and nowadays the top accommodation option. Further information from Ski Safari.
Nearest airport: Kiruna. 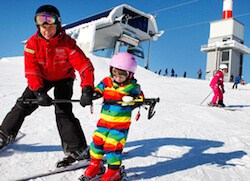 Lifts stay open until May 9 and open once again on October 12 – which means that the season lasts for 200 days. The resort has 26 lifts and the longest run is 1300m.
Stay: Ski-Inn Hotel Ruka Village, which is in the heart of Ruka village.
Nearest airport: Kuusamo.

Lifts at Lake Louise stay open until May 8, and at Sunshine Village until May 23.
Stay: At the iconic Fairmont Banff Springs or Fairmont Chateau Lake Louise.
Nearest airport: Calgary.

The resort that is traditionally one of the first in North America to open for the winter season – is also one of the last to close: on May 8.
Stay: Alpine Slopes Lodge, 15 miles west of the Loveland Ski Area.
Nearest airport: Denver. 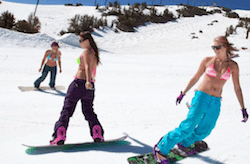 The lifts remain open until May 30.
Stay: The Village at Squaw Valley, which is close to the shops, restaurants and ski slopes.
Nearest airports: San Francisco and Reno.

Lifts are open on Blackcomb Mountain until May 30. The summer season runs from June 11 to July 17. Summer Glacier Camps are available for freestyle, freeride, moguls and race-training. All the accommodations and restaurants in Whistler Village are open year round.
Stay: at the slopeside Chateau Fairmont Whistler.
Nearest airport: Vancouver.

Also see our features on Where to go for summer skiing and Keeping fit during the summer.

No Responses to “Where Can I Ski Now?”