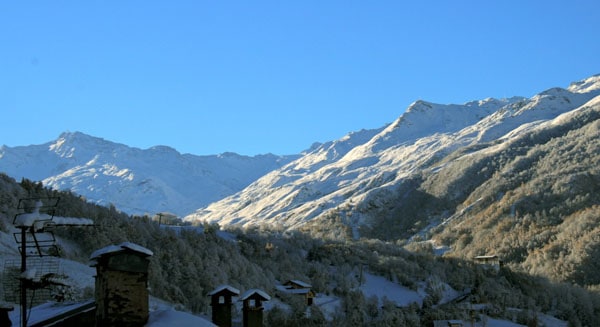 What a fantastic preview of winter we’ve just had! There’s been over half a metre of fresh snow in parts of the Alps this weekend – and there’s more to come, according to Welove2ski’s Alpine snow forecast. Here is our snow report for October 29.

What was remarkable about this latest autumn dump is the fact that it was accompanied by such bitterly cold temperatures, which allowed the snow to settle on the valley floors. There’s even snow this morning on the rooftops of central Munich.

So far, the deepest accumulations we’ve heard about are in Saas-Fee in Switzerland. Today’s snow report from the Allalin glacier talks of 65cm of fresh snow – and the pistes up there are closed because of the avalanche risk.

There’s been heavy snow in Zermatt too, where roughly half a metre of snow is lying on the glacier, and the lifts are running. There are eight pistes to ski, and powder, powder POWDER for the early birds, on the slopes below the glacier down to Trockener Steg.

Here’s how it was looking at the hamlet of Findeln above Zermatt this morning. 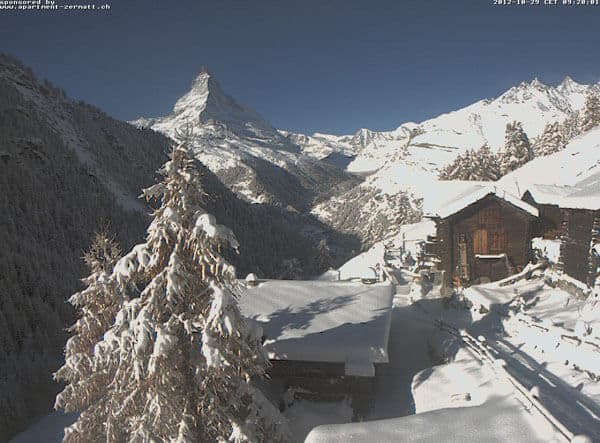 Zermatt, October 29. The snow report talks of 50cm of fresh on the glacier. Photo: © apartment-zermatt.ch

There’s been heavy snow south of St Moritz in Switzerland too. The ski area at Diavolezza is open this morning, and the lift company reckons there’s up to half a metre of snow on the slopes. 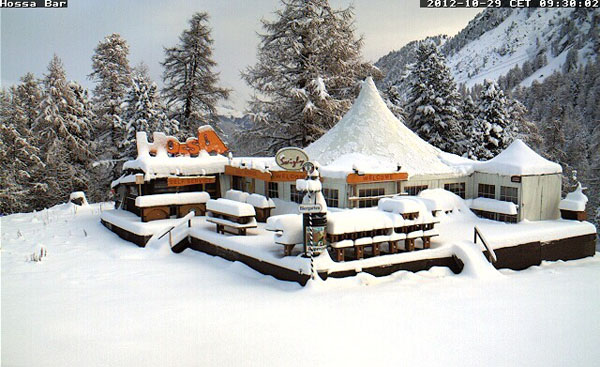 The Hossa Bar on Corvatsch, near St-Moritz, October 29. There’s no skiing here yet, but the lifts are running in nearby Diavolezza. Photo: © engadin.stmoritz.ch

Surprisingly, with all this snow about, the first races of the World Cup season went ahead on the Rettenbach glacier above Solden in Austria this weekend. Slovenia’s Tina Maze won the women’s giant slalom, and America’s Ted Ligaty the men’s (see the results here).

Here’s a sample of the latest photos and webcam shots from around the Alps. 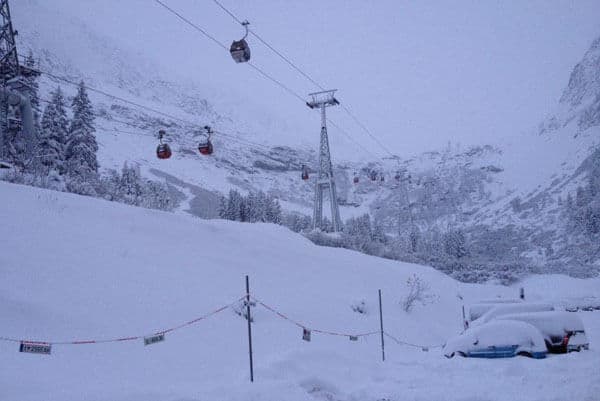 The lits up to the Stubai Glacier, October 29. According to the snow report, there’s 55cm of fresh snow up there. Photo: © tirolergletscher.com 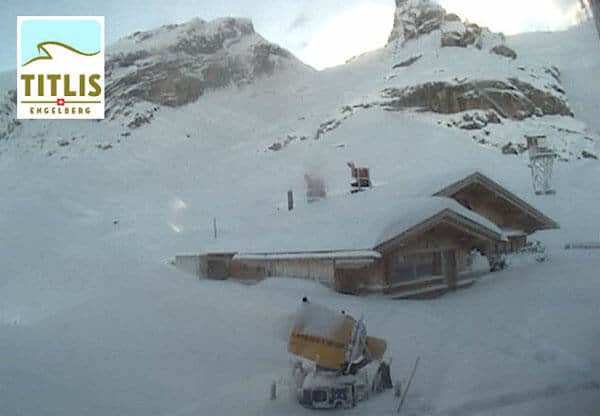 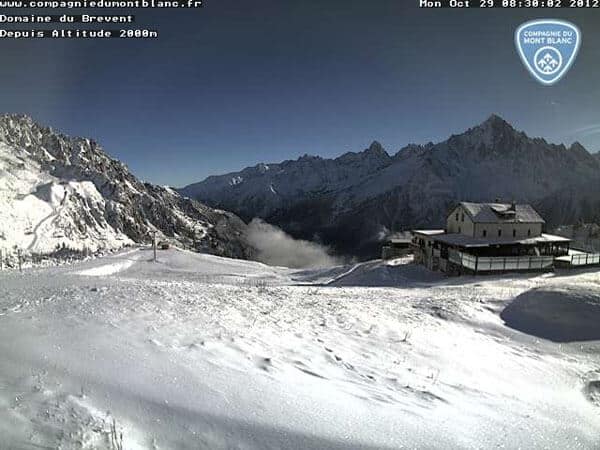 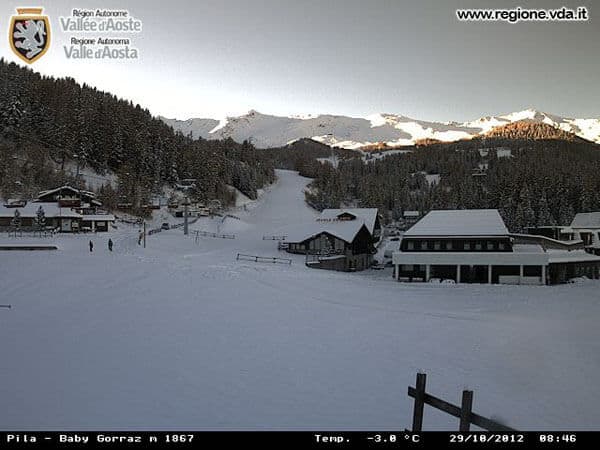 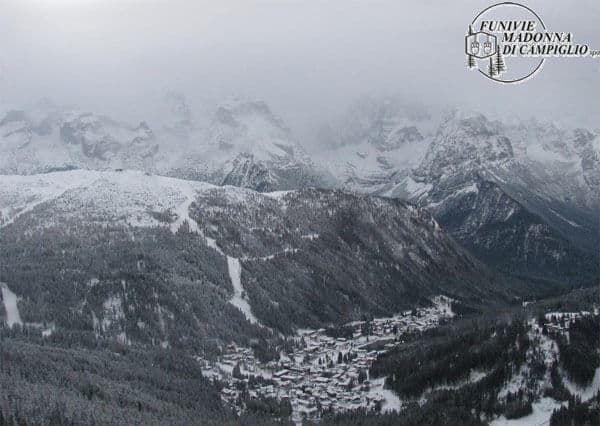 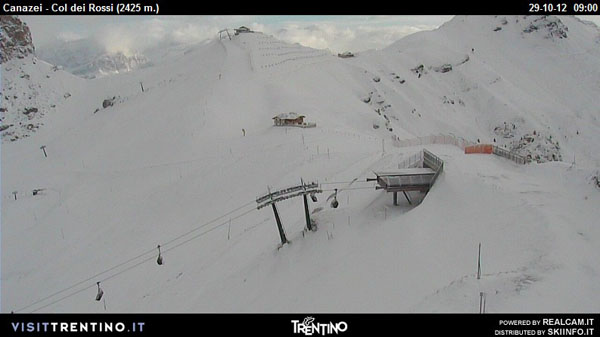 The forecast is for more snow from Wednesday. But it’s going to come in on milder air, so it won’t fall down to the valley floor. In France, Meteo Chamonix reckons the snow/rain line will hover around 2000m. The top-to-bottom views of the snow will be long gone by the end of the week: but at least we’re not expecting a thaw of the power felt last week. And looks as though conditions on the glaciers will start to be more consistent in the run-up to the mainstream ski season.

It’s snowy in Scandinavia too. Below is the latest webcam shot from Are, Sweden. It’s going to stay cold here till the middle of the week, and then daytime temperatures on the lower slopes will lift above freezing – which is likely to slow down the race towards opening day. 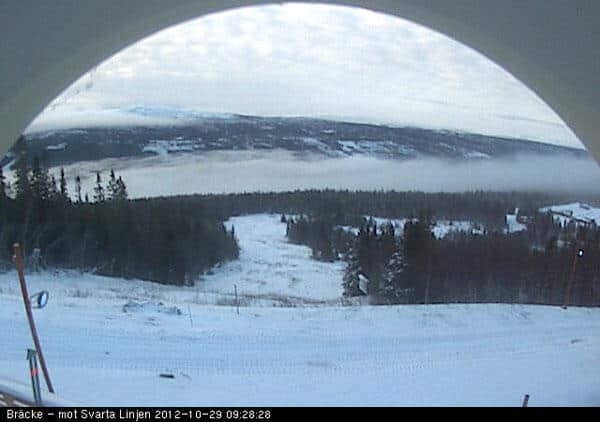 Meanwhile, in North America, last week saw several encouraging pre-season dumps – and one or two early resort openings. However, it’s the next two or three weeks that are crucial, as the big ski areas wind up for the Thanksgiving Day holiday (November 22). Copper Mountain in Colorado is one of the first to fire up its lifts – this Friday, November 2. Breckenridge in Colorado opens on November 9, as do Lake Louise and Sunshine Village in Banff National Park, in Canada. Vail, Colorado opens on November 16, and Whistler on November 22.

This week, the Canadian Rockies that have the most interesting forecast, with scattered snow flurries and sub-zero temperatures predicted. In Colorado, there’s going to be thaw.

Here’s the spectacular view from the slopes of Lake Louise yesterday – where it already looks like mid-winter. The scene from the slopes of Lake Louise, Canada, yesterday, October 28. The resort is hoping to open on November 9. Photo: © skilouise.com