Spring is going to be distinctly less spring-y in the Alps for the next few days.

As regular followers of our Snow Report will know, the weather has – for the most part – been magnificent, sunny, and very warm in the Alps since early March. But the high pressure that’s dominated conditions for weeks now is loosening its grip, and cooler, more humid air has been flowing down from the north into Austria and eastern Switzerland. It’s spreading west, too. As a result, Meteo Chamonix predicts that in the French Alps the freezing point will drop from 3000m today to 1700m tomorrow in those areas exposed to the north-easterly wind.

In the west, it looks as though skies will remain clear despite the lower temperatures. By contrast, in the east, there’s already been snow – up to 10cm on high ground in the Tirol – and there’s more to come, both today and tomorrow. Here’s tomorrow’s snow forecast for the Alps – which is predicting 30cm in places. 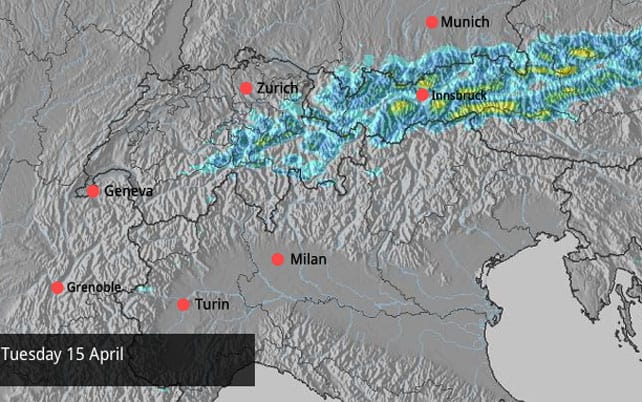 The fresh snow will be a great tonic for those ski resorts still running their lifts – and Thursday should be a cracking day at altitude when the skies clear – even better than my day on the glacier in Tignes last week. In fact, off-piste, there may be enough powder about to completely cover the crusty, granular snow left behind by the extended thaw.

More snow is likely over Easter weekend, too – in the west as well as the east. Keep an eye on our Snow Forecast for signs of that.


With so much going on weather-wise, it’s hard to generalise about skiing conditions over the next three days. But in the west it looks as though the snow won’t be softening as quickly as it has been in recent weeks, and in fact it might stay hard and icy on north-facing slopes all day. Anyone who (like me) loves skiing spring snow just as it turns will still find it: but they’ll probably need to wait a little longer each morning for it to soften, and stick to sunnier pistes. Meanwhile, in Austria, there could well be proper, wintry snow to ski – soft and creamy and delicious…

Right, onto my customary survey of the cams, starting with high-altitude Val Thorens in the Three Valleys – where snow depths range between 85 and 190cm.  The resort doesn’t shut down its lifts until May 11.

Meanwhile, pictured below is Les Deux Alpes, which closes on April 26, and still has a couple of metres of snow bedded down on its glacier. 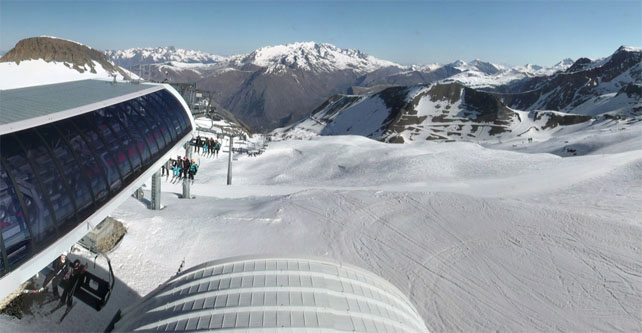 Pictured below is Cervinia, which closes on May 4. Here the snow is 45-295cm deep. 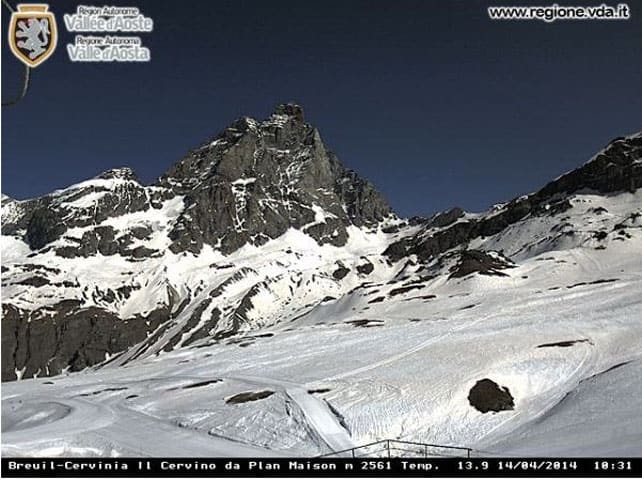 Finally, here is Obergurgl in Austria. The skies are clear this morning – but there should be light snowfall here in the afternoon. Currently there’s 30-108cm of cover, on-piste. The resort closes on May 4.

Fresh snow in the American Rockies

Today is going to be a powder day in the  Colorado and Utah Rockies – thanks to the 15-30cm top-up of snow received there yesterday. This is how the snow marker at Breckenridge, Colorado, was looking yesterday afternoon… 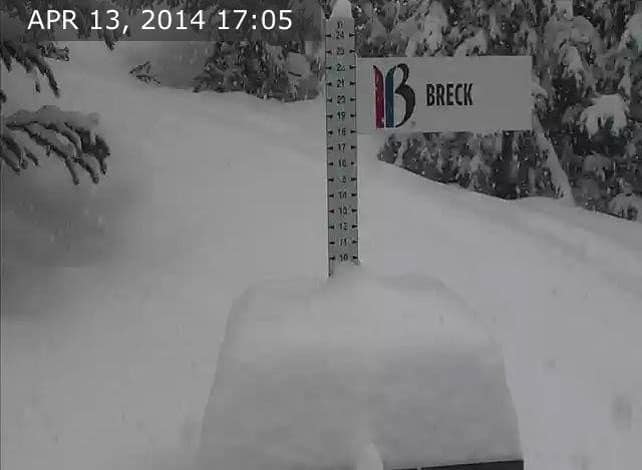 According to local snow guru Joel Gatz there should be more snow in the region on Wednesday night, too.

No Responses to “Snow Report, April 14”