The first half of spring in the Alps was characterised by balmy temperatures and endless days of sunshine. The second half, by contrast, is becoming a lot more changeable.

Regular followers of the Snow Report will know that there was heavy snow last weekend, with several high-altitude ski areas receiving an extra 40cm of the white stuff. Now, our Snow Forecast for the Alps is predicting further snowfall across the central Alps, with parts of Switzerland, Austria and Italy due to get a 30cm top-up on Sunday and Monday. 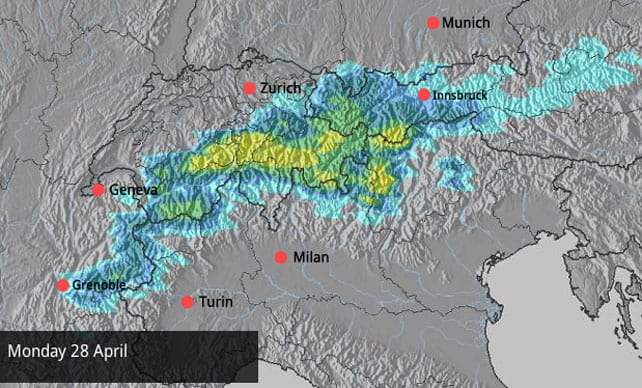 It’s going to get much cooler, too. French forecaster Meteo Chamonix predicts a drop in the freezing point from 2700m today to 1800m on Sunday. For a time, the new snow will settle even lower than that.

Further periods of snow, coupled with cool temperatures, are expected in the middle of next week.

Which means that anyone heading out to the Alps next week for an end-of-season ski is going to feel like they’ve taken a big step back into winter. Only a handful of high-altitude resorts and glacier ski areas will be open, and up there they’ll be welcomed by a coating of fresh, cold and creamy snow. Visibility is likely to be less than brilliant, but at least the lack of sunshine should keep the snow powdery for longer. Even when the sun does come out, and starts to moisten the lower slopes, conditions will still be wintry up at 3000m.

Right, onto a survey of today’s webcams and Facebook shots. Today, spring is still in control of conditions at village level (and there’s a threat of thunderstorms developing in the afternoon). Up high, however, skiers are still enjoying the soft, cold snow that fell at the weekend.

Let’s start with the glacier in Les Deux Alpes, in France, which closes on April 26 – before reopening on June 26 for its vigorous summer skiing season. Up here, the snow is currently up to 210cm deep. 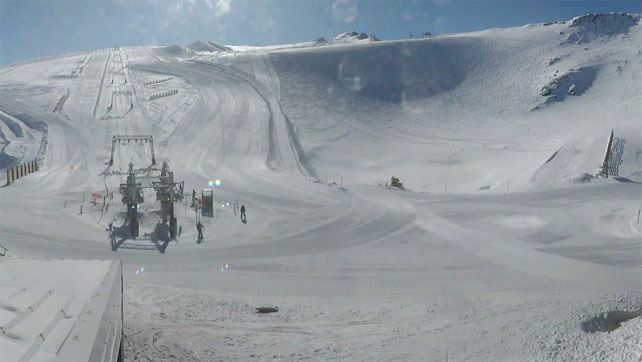 Pictured, below, are the snow-sure slopes of Val Thorens which are holding up remarkably well, given the long, warm spring. The resort closes on May 11 and the snow is currently 75-180cm deep.

Below is Cervinia in Italy, which shares its ski area with neighbouring Zermatt. The resort saw heavy snow at the weekend and closes on May 4. However, you’ll be able to ski on the glacier in Zermatt after that, and the lifts reopen in Cervinia on June 28. Currently, the snow here is 40-330cm deep, on-piste. 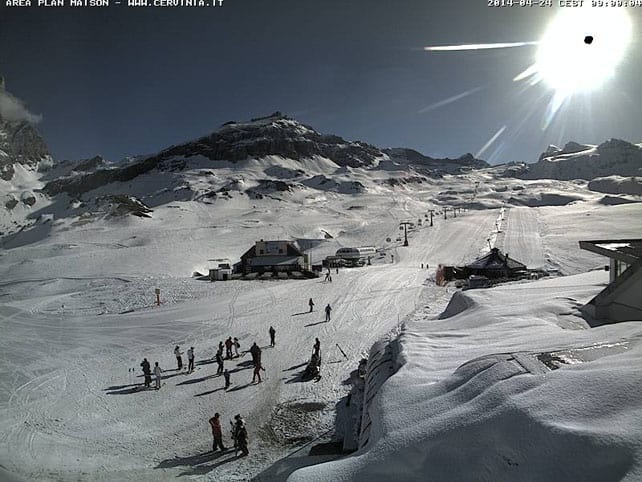 Pictured, below is the Presena Glacier at Passo Tonale in Italy, where the snow is up to six metres deep, following the memorable winter in northern Italy. 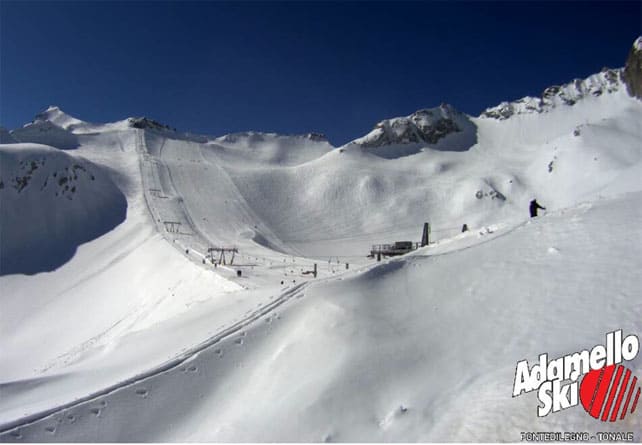 Below, is the scene at Obergurgl in Austria, which has 28-143cm of snow on its pistes and closes on May 4.

Finally, here’s a taste of corduroy on the Hintertux glacier skiing area, at the top end of the Zillertal in Austria. There’s up to four metres of settled snow here and the slopes remain open for skiing all year. 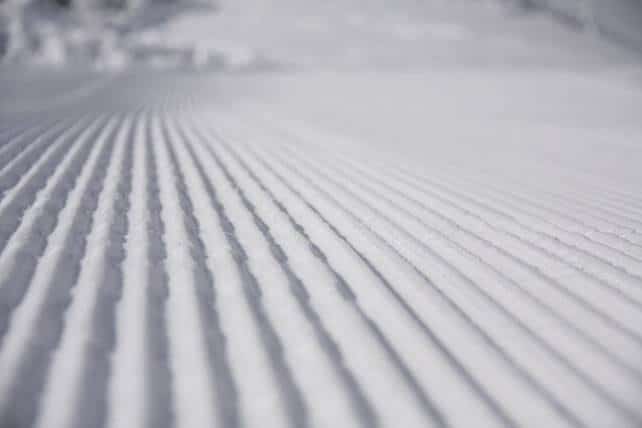 Just look at the Easter they had in Lake Louise…

We all know that winter usually hangs around for a long time in the Canadian Rockies – making Lake Louise a pretty safe bet for Easter skiing. But this year…Well, just take a look at the video below.

Meanwhile, south of the border, Colorado snow guru Joel Gratz is forecasting a snowy Saturday night and Sunday – with 25cm+ of the white stuff expected at altitude. That should make April 27, the last day of the season in Breckenridge, a memorable one. This bustling, fun-loving ski town has plenty to celebrate, having notched up a mighty 11.15m of snow during the course of the winter. A powder day will be the perfect way to bow out.

One Response to “Snow Report, April 24”