More Heavy Snow in the Alps, But… 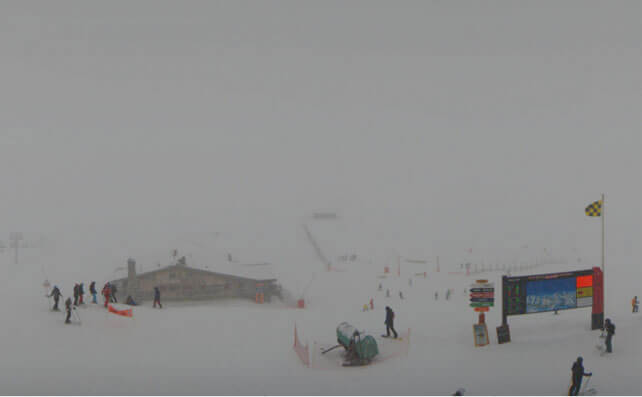 In the Alps, a busy period of weather lies ahead. Snow, rain and yo-yoing temperatures are all in the forecast over the next five days.

This morning, as I write, it’s snowing hard down to village level in the resorts of the north-west. But temperatures are going to rise sharply during the course of the day, and at lower altitudes the snow will turn to rain. We can expect the snow/rain line to be around 1800m this afternoon in many French resorts, and as high as 2000m on Friday night.

Fortunately, Saturday will see the start of cooler weather, and by Tuesday the daytime freezing point will be back around 1000m, with snow falling down to 300m on Tuesday night.

Up high, of course, all the precipitation will fall as snow. Once again resorts in France, western Switzerland, and the Arlberg in Austria will get the lion’s share, and according to our snow forecast for the Alps, as much as half a metre will fall, especially in the west. That’s on top of the 60-odd centimetres seen in parts of France since January 2.

Here’s today’s snow forecast. Remember that at lower elevations the snow will turn to rain during the day, especially in the west, so the new snow will be wet and heavy on the valley runs. 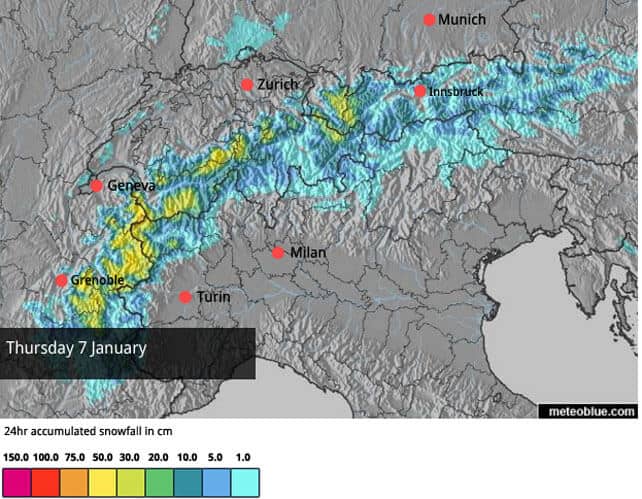 The Welove2ski snow forecast for today.

Snow is also expected to fall across the Alps on each of the next five days, with resorts in Italy increasingly in the firing line. That’ll be a huge relief for the Dolomites, where the snow is still very thin (or non-existent) away from the groomed pistes.

Here’s the current snow forecast for January 11, which shows the snow spreading southwards. 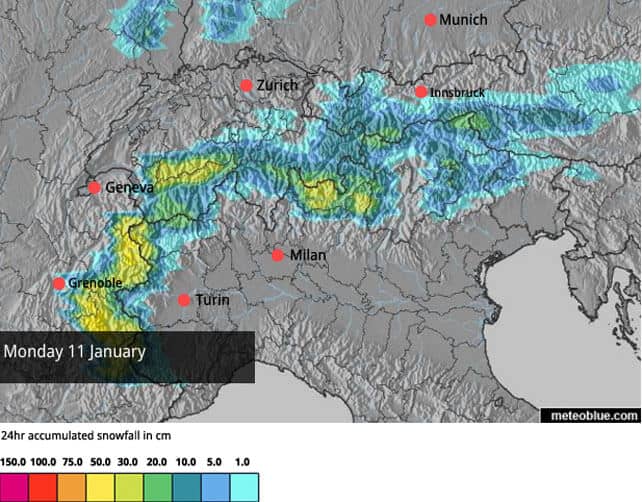 The latest snow map for January 11.

So in the short term it’s going to be a bit soggy and stormy: but once the weather cools off, the overall effect will be to continue the dramatic improvement in on-piste skiing conditions across the Alps.

However, as my fellow editor Peter Hardy pointed out yesterday, there’s also a significant avalanche risk associated with all this new snow. There have been several fatal avalanche accidents this week, and plenty of near-misses too.

In France today, the danger level is back up to 4/5, which effectively rules out off-piste skiing. So if you’re aching for powder turns, that’s too bad. Be patient. Be safe. Wait until the risk drops back, and hire a guide when you go.

Here’s a quick survey of today’s webcams, starting with La Croisette at Courchevel 1850 in the Three Valleys, which gives you an idea of how heavy the snow is this morning. Currently, the cover is 78-123cm deep on the pistes. 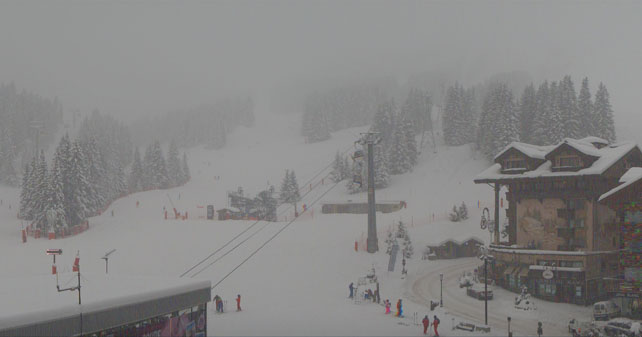 Meanwhile, this is Serre Chevalier, further south, where the snow is 28-50cm deep. 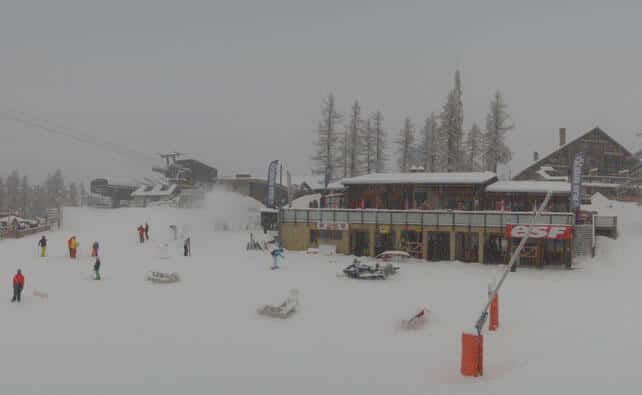 Pictured below is the Attelas lift station above Verbier in Switzerland, where it’s snowing hard, too. Here, the snowpack is 20-100cm deep. 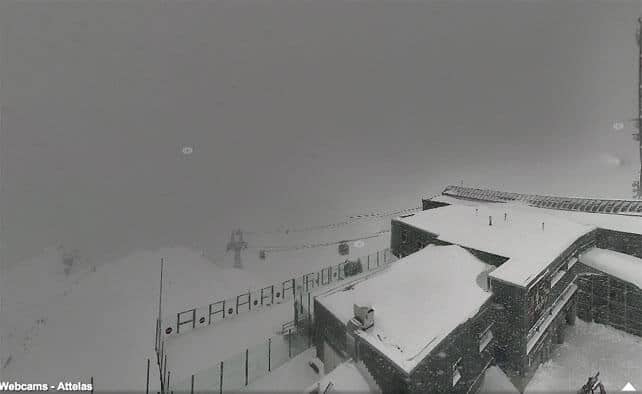 Pictured below is St Anton in the Austrian Arlberg, where the cover is 30-110cm deep. More of the white stuff is expected here later today – and not just from the snow cannons.

Below is Obergurgl, where the sun was still out this morning, too. Here the snow is 10-86cm deep. 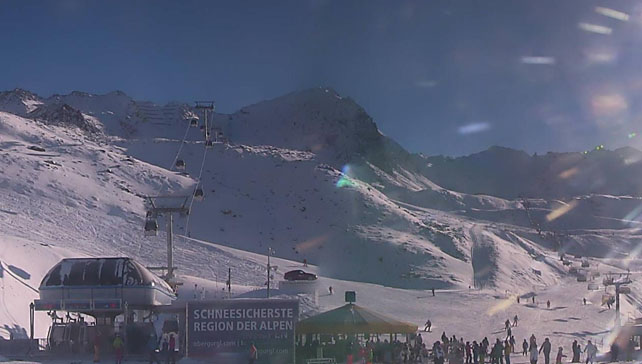 And below is Canazei in the Italian Dolomites. Thanks to brilliant work by snow-making crews, there’s plenty of skiing here, but little or no cover off-piste. The new snow, expected over the next five days, will be very welcome. 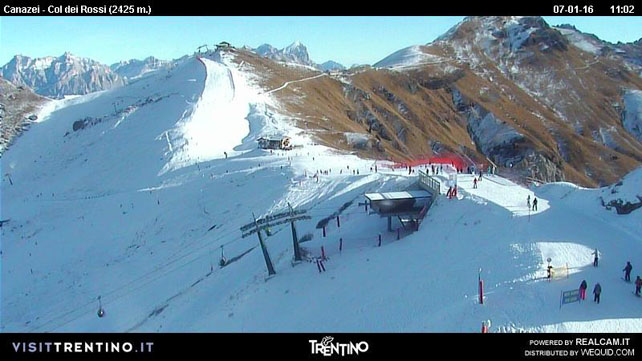 In the Pyrenees, there’s been lots of new snow too. Yesterday, it snowed down to village level in Cauterets – but temperatures are rising today, as is the snowline. Here’s a shot of the ski area from yesterday. 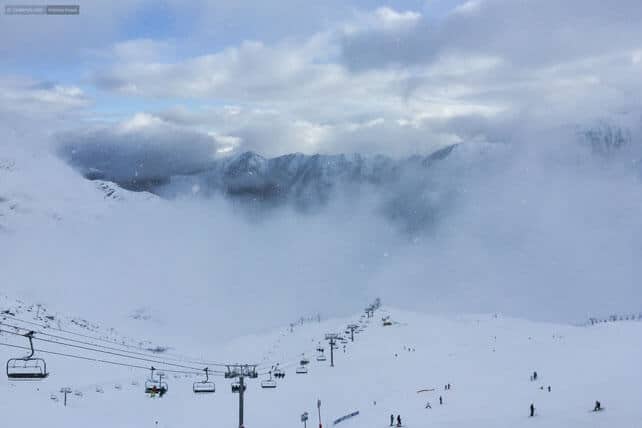 Meanwhile in the USA and Canada…

California has also had a busy spell of weather this week – with a succession of small and mid-sized snowstorms moving across the Sierra Nevada. Some resorts have done much better than others. Kirkwood’s had 33cm of new snow so far, Squaw Valley 30cm and Mammoth 50cm.

There’s been a dusting of snow across the Rockies, but by comparison with the snowfall a couple of weeks ago, the weather’s been very quiet.

No Responses to “More Heavy Snow in the Alps, But…”