A Gorgeous Day at Altitude in the Alps

It’s been a cracking day to be skiing a glacier: mild, for sure, but underneath blue skies and with the snow softening in the morning sunlight I don’t think there will have been too many complaints.

Pictured belwo is how it was looking up on the Hintertux glacier in Austria this morning, at the far end of the Zillertal. The Hintertux is one of only two Alpine ski areas open all year, and with up to 290cm of snow on the slopes it’s in good shape for the late spring. 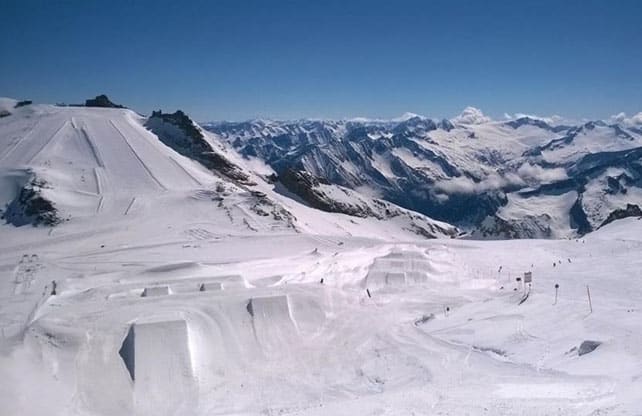 It may even get a top-up of snow on Sunday – as you’ll see from our latest snow forecast. There could be as much as 10cm in this part of Austria, but don’t get your hopes up for a return to wintry weather, at least not in the short term. Next week is likely to be very mild. In Austria, the freezing point will jump to a heady 3500m on Monday.

This Sunday sees the Pitztal glacier close for the summer, with the Molltal glacier will be shutting for a few weeks on May 12. But you’ll still be able to ski on the Kitzsteinhorn glacier (till May 25), the Kaunertal (till June 7), and the Stubai (till July 3). The Molltal glacier reopens on June 20.

Pictured below is how it was looking on the Stubai this afternoon. 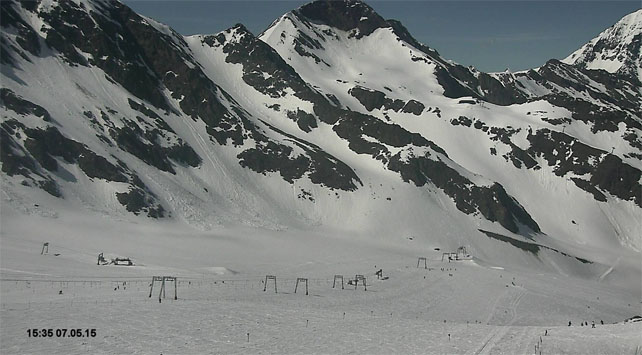 Meanwhile, here’s today’s snow report from high-altitude Val Thorens, in the Three Valleys of France. It shuts on Sunday, and along with Tignes, it’s the last of the French resorts to hang up its boots for the season. There’s up to 175cm of snow on the highest pistes there today, and the temperature at 3200m is expected to touch +1C.

In Switzerland, Engelberg’s glacier closes on May 25. Zermatt (open all year) and Saas-Fee (from July 19 right through till winter) are the main focus of summer-skiing activity. You’ll also be able to access Zermatt’s terrain from Cervinia.

For more on the joys of summer skiing, check out our feature on the best resorts for a summer trip. Don’t forget all the other stuff you can do in the mountains during the summer, either – whether it’s yodelling, mountain biking, road-cycling or mucking about in an adventure park.

No Responses to “A Gorgeous Day at Altitude in the Alps”