Even if a single flake of snow wasn’t expected between now and December 1, this would still go down as a memorable November in the Alps. Anyone who follows our Snow Report will know that the white stuff has been seen regularly since late October – and in considerable quantities. There have been bluebird powder days. Lifts and pistes have opened early. And the early-season buzz has been loud and strong.

In case you missed it, here’s the rather amazing video produced by Big Mountain Adventures in Tignes last week – which sums up the remarkable conditions nicely…

Sadly, the choice of resorts in which to take advantage of all late autumn/early winter snow has been limited. Admittedly, nearly every glacier ski area has its lifts running: and in response to half a metre of snow on November 10, Tignes opened its Double M piste back to Val Claret last Monday. Verbier and Alpe d’Huez have opened for weekend previews too. However, as far as I know, Obergurgl in Austria is the only big ski area without a glacier to be spinning its lifts full-time at the moment. The resort opened on November 14 – and this video gives you a taste of how good conditions were on Saturday.

Just looking at it makes my legs twitch…

Fortunately, more resorts will be coming on line over the next ten days – starting with Val Thorens on Thursday: and right on cue, Mother Nature has lined up more of the white stuff. Here’s today’s snow forecast for the Alps. 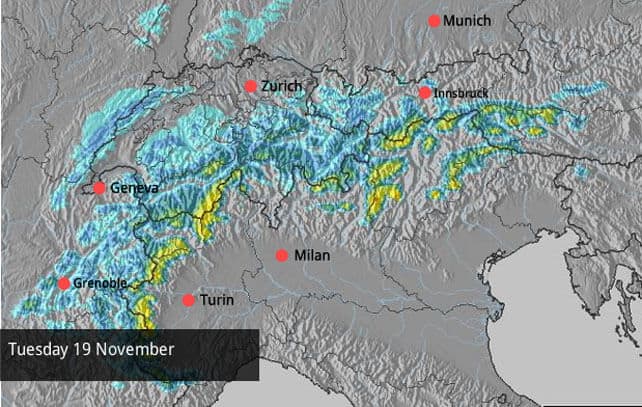 The Welove2ski snow forecast for the Alps, November 19.

The Alps are currently being squeezed between two areas of low pressure – a cold one coming down from the north, and milder, more humid one moving up from the Gulf of Genoa in the south. Normally the mixing of cold and humid air like this is a recipe for snow – although exactly in what quantity it will fall is hard to predict. But what’s already clear is that the wintry spell will last until the end of the week, and be widespread. Currently, it looks as though the west will get the lion’s share.

What’s more, it’ll be settling at low altitudes too – once the cold air arrives later today. French forecaster Meteo Chamonix reckons the freezing point will sink from 2300m this morning all the way down to 500m overnight.

In fact, it’s already been snowing at altitude, along the Italian border with France, Switzerland and Austria border. Pictured, below, was the centre of Val d’Isere this morning. 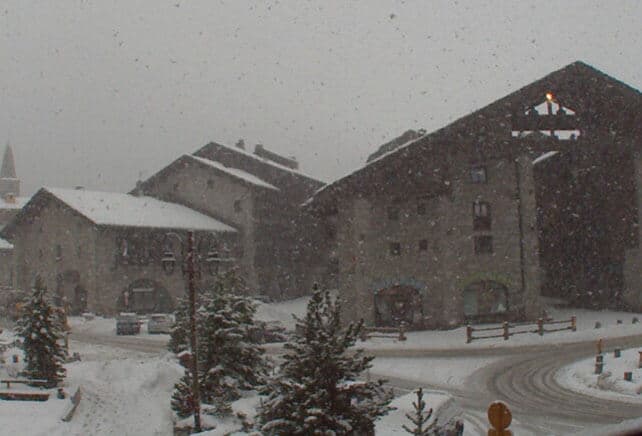 This was Montgenevre this morning. 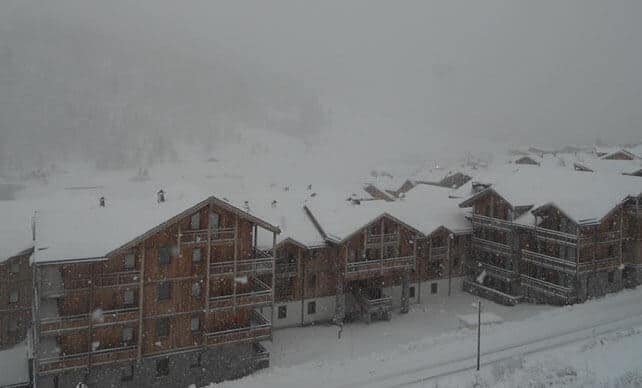 Below, is how the hamlet of Findeln near Zermatt was looking at about the same time. 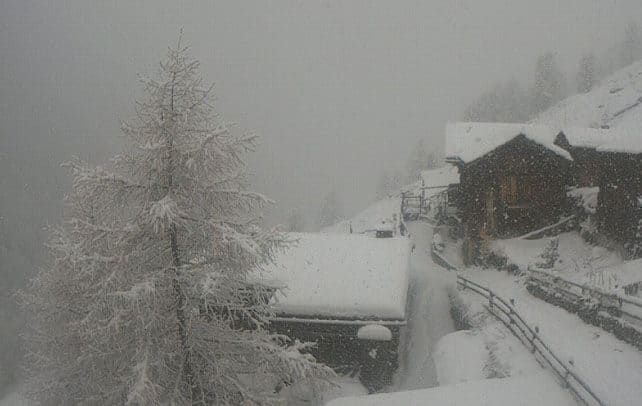 Meanwhile, pictured below is Obergurgl this afternoon. 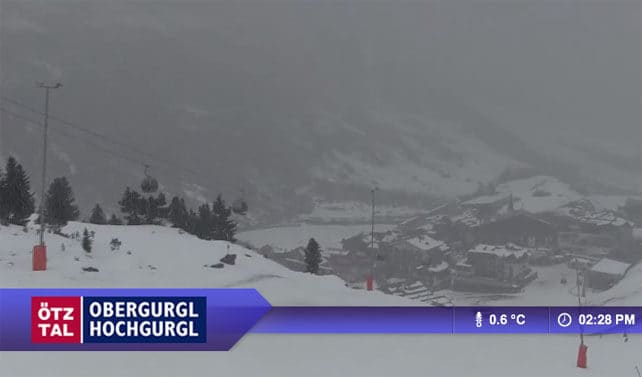 Clearly, anyone skiing once the skies clear is going to have a November session they won’t easily forget.

That said, the immediate outlook beyond the weekend is altogether less snowy. Consensus is forming amongst the mid-range forecasting models that high pressure will dominate over western Europe next week, and it could get quite mild again. We’ll keep you posted about that.

There’s been snow in the Pyrenees, too

The Pyrenees have had a dump too. This morning saw an announcement from Baqueira Beret that it’s going to open a week early, thanks to 50-80cm of snow this weekend. Skiing in the Pyrenees from November 23: it’s not often I get to write that… 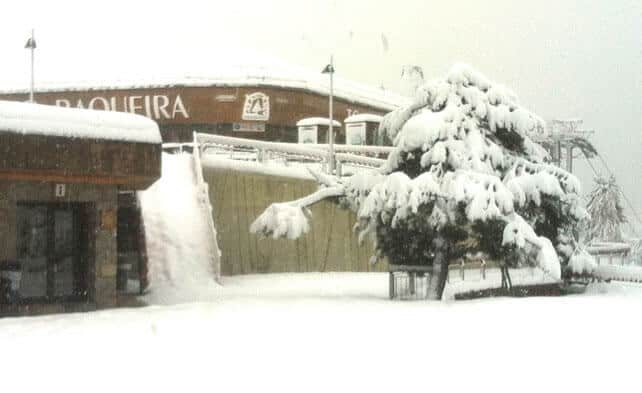 Out west in the US and Canada, it’s been snowing too. Colorado in particular had a cracking weekend – with Breckenridge clocking up 38cm, Aspen 25cm and Winter Park a whopping 55cm.

Here’s a rather natty Saturday video from Breckenridge, after its first helping of snow. Another 20cm dropped the next day.

And here’s a taste of how it was in Aspen… 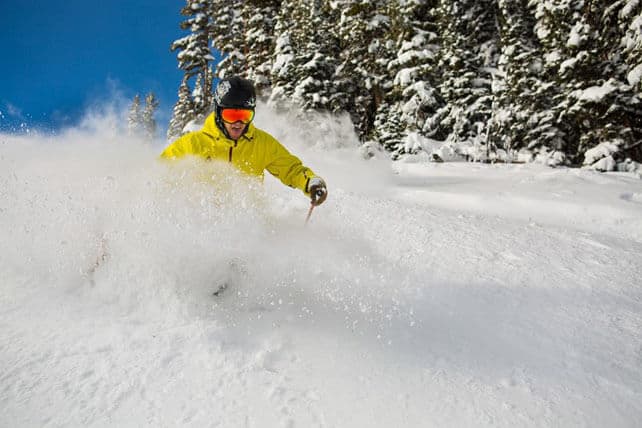 With the Thanksgiving holiday on the way, the snow is most welcome – although according to local snow supremo Joel Gratz, the weather will turn milder this week.

By contrast, over in California, the forecast is promising to say the least: with 30cm+ of snow predicted over the next three days in the Tahoe area for resorts such as Heavenly.

…and snow in Canada

Pictured, below, is Lake Louise on Sunday – during a weekend that saw 19cm of new snow. The mercury there isn’t expected to rise above -9C today. 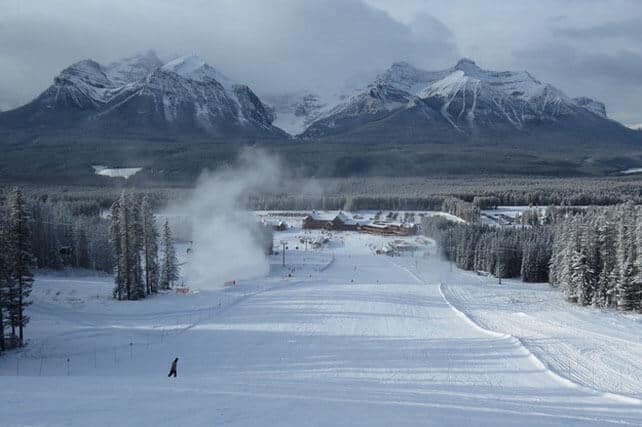 Whistler had 19cm of new snow for its opening weekend, too: here’s the opening-day video celebrating the early-season stoke…