Heavy Snow in the Western Alps

Heavy snow is falling in the western Alps today. 30-50 centimetres are expected in the French Alps, the Aosta Valley in Italy, and western Switzerland.

In parts of France, there could be more. The Mont Blanc massif, parts of the Tarentaise, and the mountains east of Grenoble could see as much as 75-100cm. What’s more, it will be settling down to 1000m. 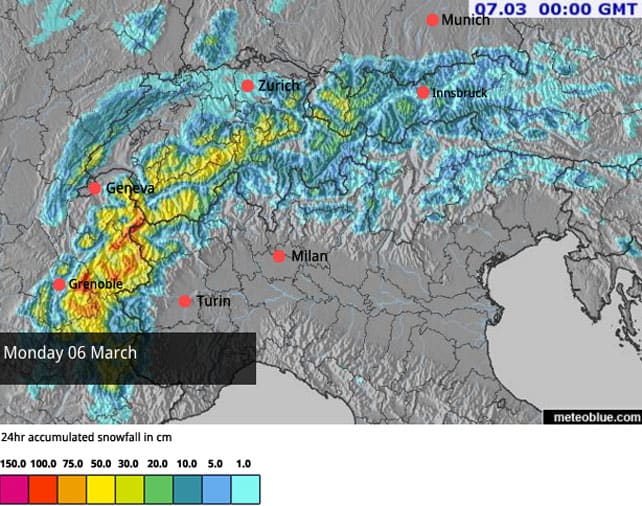 There’s more to come tomorrow, too – as the storm extends further into Austria. 30-50cm is on the cards again for some resorts. 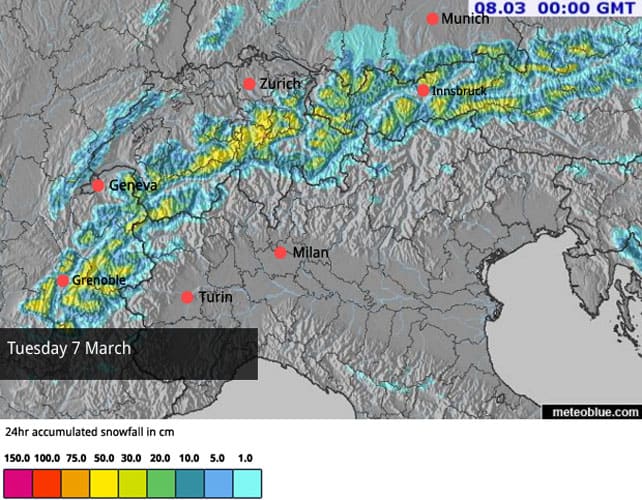 The storm comes on top of two significant snowfalls in the last seven days.

Between Tuesday and Thursday last week 90cm fell above Chamonix, while the higher slopes between Tignes and Val d’Isere picked up 75cm. The Three Valleys had 55-60cm, and the Arlberg in Austria (home to St Anton) about 20cm (read more about that storm in Thursday’s snow report).

Then, on Friday night and Saturday another weather front added more snow. This time, 10-30cm fell across many parts of the Alps, with more on the main Alpine ridge. There was up to 50cm in places, above Saas Fee in Switzerland, for example, and in the southern Oetztal, near Obergurgl in Austria.

This was La Rosiere this morning. The Tarentaise resort, on the border with Italy, gets a lot of snow from storms coming in from the north-west. 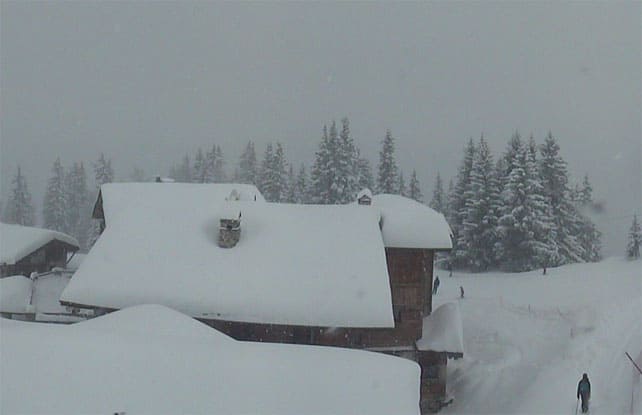 This was La Daille in Val d’Isere first thing this morning. 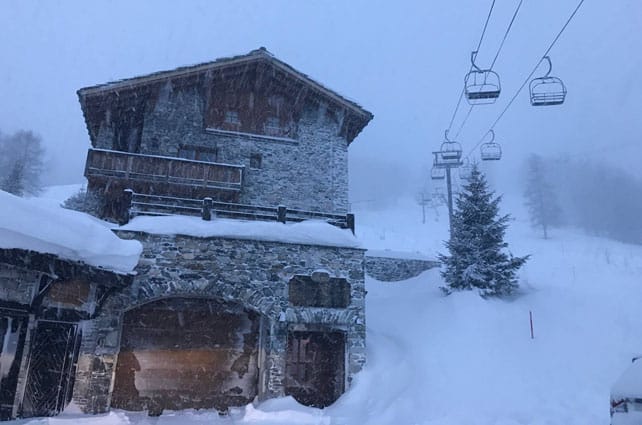 Here’s La Croisette in Courchevel, part of the Three Valleys. 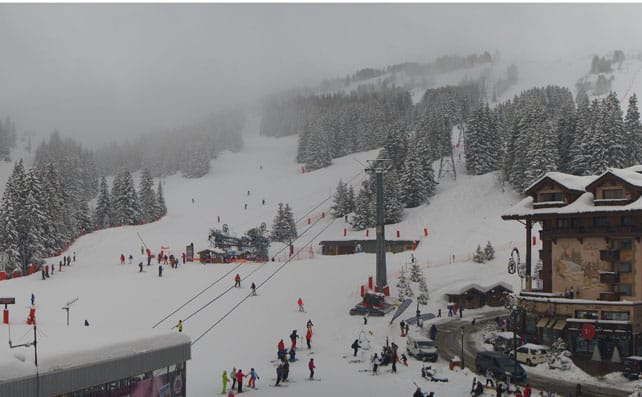 This is was Serre Chevalier just before lunch.

And this was Cervinia in Italy at about the same time. 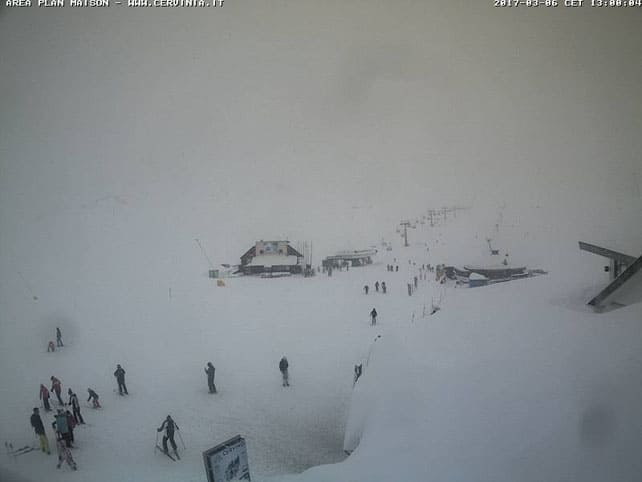 As I write, the clouds have lifted further east – although there was snowfall here overnight and this morning. More snow will fall in eastern Switzerland and Austria this afternoon and overnight.

Here’s how it looked in Obergurgl in the Austrian Tirol earlier today.

This was Kuhtai, also in the Tirol. 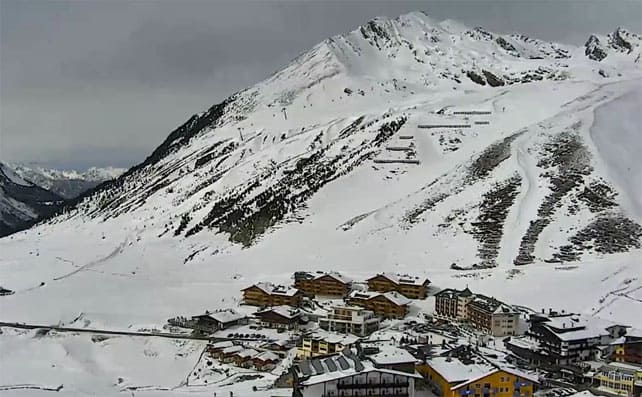 Generally, the Italian Alps won’t see as much of the white stuff as the northern Alps over the next couple of days – although, as you can from this webcam shot, there was fresh snow in Madonna di Campiglio over the weekend. 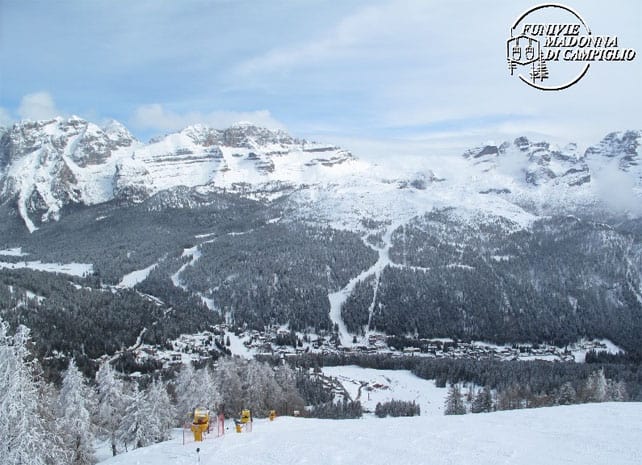 In the western Alps the new snow has dramatically increased the avalanche risk, which now stands at 4/5 in many places. That rules out off-piste skiing. The latest avalanche fatality, in the Aosta Valley in Italy, is a reminder of the risks involved.

The snowfall will ease off midweek, and then temperatures are set to jump in the western Alps on Thursday and Friday. Here, the freezing point will reach above 2800m in places, before easing back to less balmy levels at the weekend. If you’re planning to ski soft, wintry snow, you’ll have to aim for a high-altitude resort, and stick to shady, north-facing slopes.

Further east, it will be a little cooler. In the Austrian Arlberg, Thursday will be the warmest day, with the freezing point at 2100m.

The extraordinary season in the American west continues. California has been hit by another big storm, which is expected to drop 75cm on some resorts by midday today.

Here’s how it was looking in Squaw Valley near Lake Tahoe yesterday. 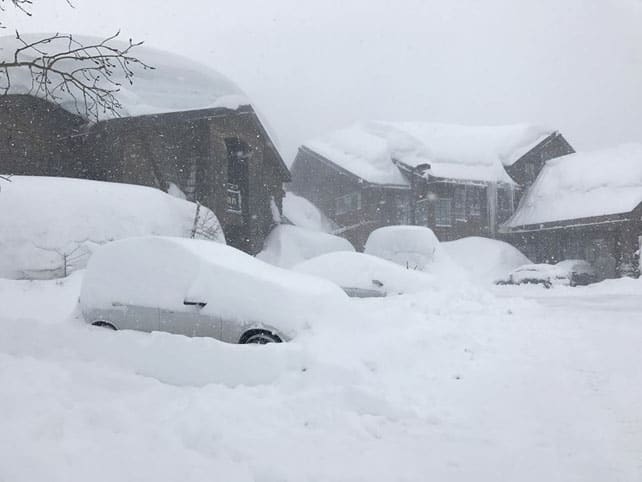 The snow is moving inland, too. In Utah, it started snowing again yesterday Snowbird is expecting 30-45cm by the time the clouds lift (the resort had a whopping 190cm of the white stuff in the seven days up to February 28).

It’s snowing in Wyoming too. Yesterday, Jackson Hole passed the 500 inches/12.7m mark for snowfall this season, which is a rare achievement. More is expected this week.

Up in Canada, they’ve had fresh snow, too. Whistler reports 67cm of fresh snow since the March 1, and in Lake Louise they woke up to 21cm of new snow on Sunday. 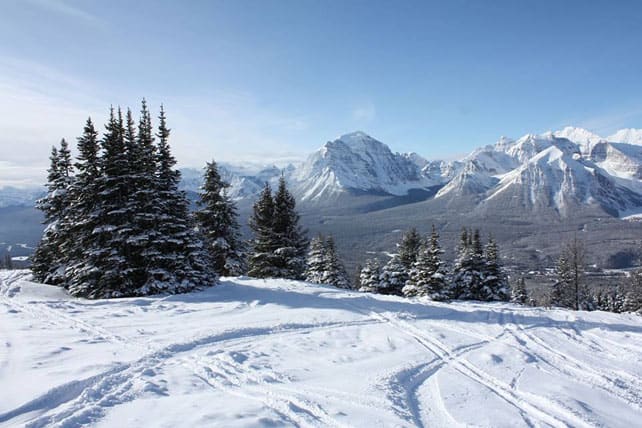 One Response to “Heavy Snow in the Western Alps”