In the Alps a cold snap is coming, and light to moderate snowfall is expected – adding to the 5-15cm seen in many resorts at the weekend.

Meanwhile, across the Atlantic, western Canada has just had a good week, and more snow is on the way.

There was fresh snow across the Alps this weekend. Not in any significant quantity: but combined with a drop in temperature it did at least blunt the force of last week’s spring weather – which was rapidly thinning the snow at lower altitudes.

In the Austrian Arlberg, Lech reports 15cm of fresh snow as a result of the weekend’s wintry spell. Across Switzerland, 5-10cm was normal at altitude, and in France 5-15cm fell above 1600m. 15cm is reported this morning on the Grande Motte glacier above the Espace Killy (home to both Tignes and Val d’Isere). In the western resorts of Italy there were similar amounts. Up to 10cm fell in parts of the Dolomites. 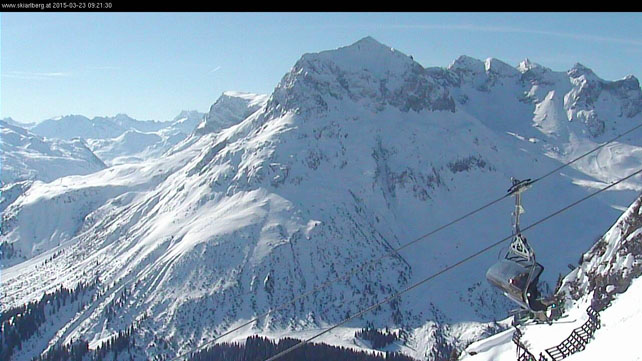 Today, the sun is back, and temperatures are rising. In France, we can expect the snow to get wet and heavy up to 2000m on north-facing slopes and up to 2700m on south-facing slopes. In Austria, the wet snow will reach a little higher than that. So if you want to ski the fresh, dry wintry stuff, you need to aim for the highest, shadiest slopes: otherwise, spring-skiing tactics are essential to make the most of the conditions.

The good news is that more snow is on the way, and a precipitous drop in temperatures which will make the mountains feel wintry from Tuesday night until Friday. To begin with the western Alps will be colder than the east, though by the end of the week every part of the region will have cooled down.

There’ll be fresh snow too. Exactly where it will fall and in what quantity is hard to say – there are lots of factors in play, and our snow forecast has been changing on a daily basis as result. Sadly, we’re not expecting a big dump, although 10-15cm for most resorts looks like a reasonable expectation, with some lucky places getting 30cm, or more. Here’s the current snow forecast map for Wednesday, which is not likely to make anyone’s blood fizz with excitement. However, it should be noted that snow is forecast to fall somewhere on each of the next four days. 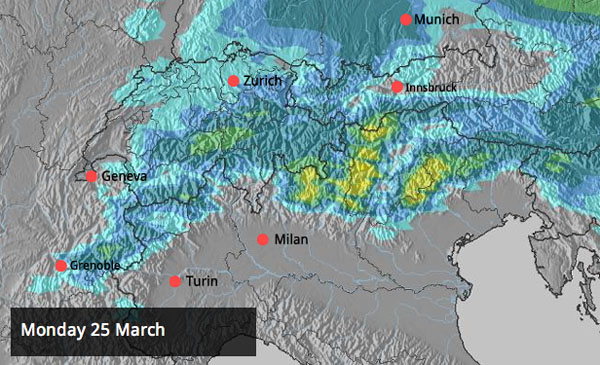 Welove2ski’s snow forecast for the Alps, for March 25.

It’s also worth noting that the Pyrenees will probably get more snow this week than the Alps.

Looking beyond the cold snap, it looks as though a return to mild and sunny weather is on the cards for the weekend and next week.

Here’s a quick squizz at the day’s webcams. As you’ll see, there’s still plenty of cover at altitude, although lower down the recent spring spell has taken its toll, Below about 1500m on south-facing slopes, pistes are now ribbons of white against the grass.

Pictured below is the Rocher de Bellevarde, seen from the terrain park in Val d’Isere. Across the resort, the snow is currently 92-160cm deep.

Pictured below is Les Arcs – which is clearly all set for a magnificent spring day. Here the snow, on-piste, is currently 72-145cm deep. 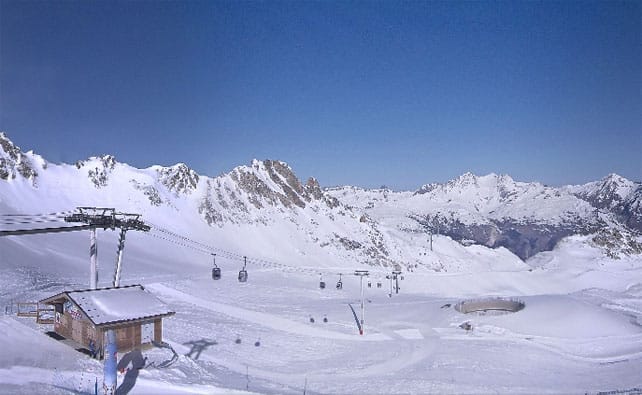 Further south in the French Alps, the sun isn’t out yet. This is Serre Chevalier, where the snow is 18-135cm deep, on-piste. 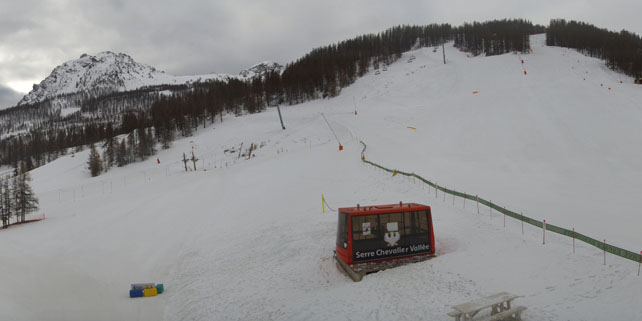 Pictured below is Gressoney in the Monterosa ski area. As you’ll have seen from last Monday’s snow report, there was heavy snow here a week ago, and a top-up at the weekend. The cover is currently 100-240cm deep. 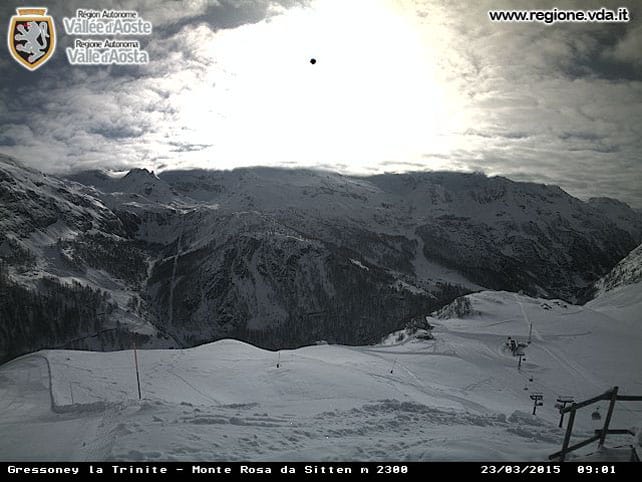 Pictured below is the north face of Mont Fort, above Verbier. Some of the lowest pistes here are now closed because of the lack of snow, but at 2200m there’s still up to 139cm of cover, and 210cm at 2727m. 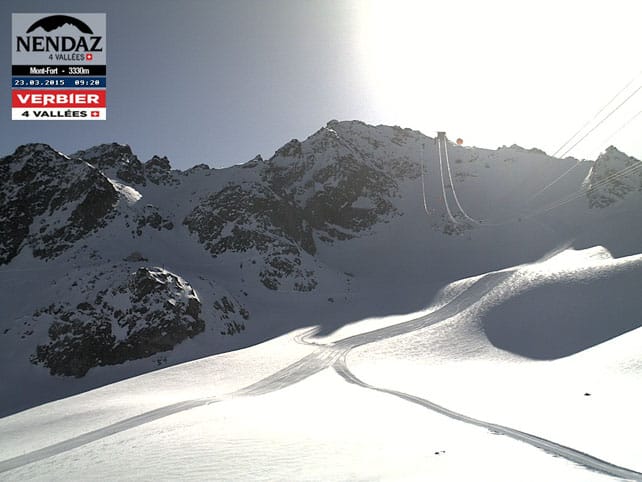 Below is how it’s looking at Obergurgl in Austria today. Here the snow is 24-157cm deep.

Last week belonged to western Canada, with several resorts notching up impressive snowfall totals. At the southern end of the Candian Rockies, Fernie reported 65cm of fresh on its upper slopes on March 16, and posted this mouthwatering video…

Then on Saturday, Revelstoke reported 40cm of fresh snow. It too, had some video to share.

Yesterday, Whistler reported 20cm of fresh snow in 48 hours and 40cm in the last week.

Western Canada is expecting more snow today as well – part of a storm system that is also spreading south into the American Rockies, bringing a few days of snow and cooler weather to the region after a long spell of mild sunshine.

In the US, the northern Rockies should get the best of the snow, but it should reach as far as Colorado, where local snow guru Joel Gratz Reckons there could be 6-12 inches of fresh snow between today and Thursday. However, he doesn’t expect there’ll be enough to really turn round the late season, which has been hit by an early – and powerful – start to spring.

No Responses to “Snow Report, March 23”