There’s been heavy snow across the southern half of the Alps, with over half a metre falling in a few lucky spots. Austria and eastern Switzerland should get a top-up tomorrow.

There’s a chance of more snow above the 2000m mark across much of the region at the start of next week.

Meanwhile, across the Atlantic, fresh snow will be followed by rising temperatures in the Rockies and Pacific Northwest. 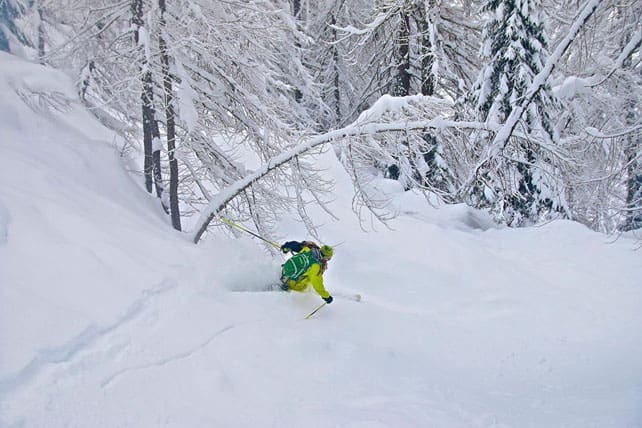 Before you get too euphoric however, bear in mind the background picture. We’re nearing the end of March. The sun is gaining strength, and whenever it shines it has an impact on the snow at all but the highest altitudes. If you want to ski soft, cold wintry snow, you have to stick to the highest, shadiest slopes – or attack freshly-fallen snow immediately, before it starts to warm up. (Although you’ll have to pay close attention to local avalanche forecasts before you try anything off-piste. It’s best to hire a guide to keep you safe.)

Still, the new snow is very welcome. Pila reported 10-20cm from the recent storm, and in the Monterosa ski area, there was up to 50cm. It’s still snowing further east in the Dolomites and the Osttirol in Austria. Parts of the Val di Fassa (home to Canazei and Moena) have had 30cm, and a few places in the Osttirol have had half a metre.

In the northern half of the Alps, there’s been snow in resorts close to the Italian border – 5cm on the Grande Motte glacier above Tignes, up to 10cm in Switzerland, and up to 15cm above Obergurgl in the Tirol in Austria.

However, it’s worth noting that in both France and Austria the avalanche-forecasting services are talking about a humid, and spring-like snow pack today, except at high altitudes.

Here’s a quick squizz at the morning webcams, starting with the Pisaillas sector at the eastern end of Val d’Isere, where there was fresh snow on Tuesday night and Wednesday – almost (but not quite) enough to fill in the tracks off piste. Overall, the snowpack here is 92-160cm deep, on-piste.

Meanwhile, pictured below is Serre Chevalier, south-east of Grenoble, which had 10cm of fresh snow at altitude yesterday. It’ll get very warm here in the afternoon, with mid-mountain temperatures of +9C in the sunshine. The snowpack is 15-140cm deep, on-piste. 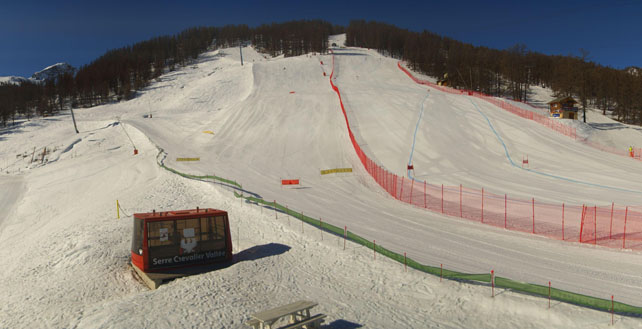 Pictured below is the north face of the Mont Fort in Verbier, Switzerland, which had around 5cm of snow yesterday. The lowest pistes here are now closed because of lack of snow, but up high there’s two metres bedded down on-piste. 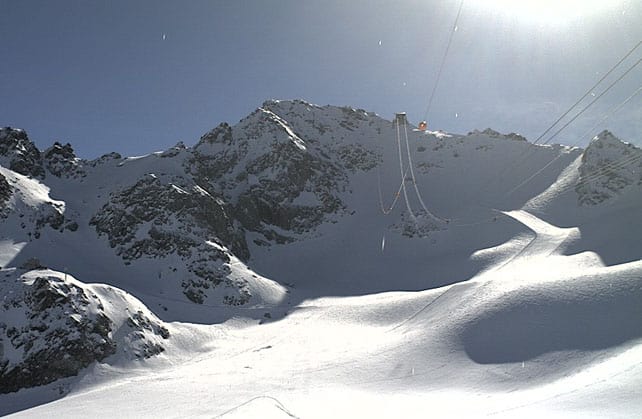 Pictured below is the Stubai glacier south of Innsbruck, where it was still snowing earlier this morning. Now it’s just foggy. The snow here is up to 210cm deep on the glacier. It’ll be a great place to ski once the skies clear.

Pictured below is Sillian in the Osttirol where there’s currently 15-50cm of cover on-piste, and fresh snow this morning.

Meanwhile, picture below is the scene near San Cassiano, in the Italian Dolomites, where it was snowing first thing. The cover is between 10 and 90cm deep, on-piste. 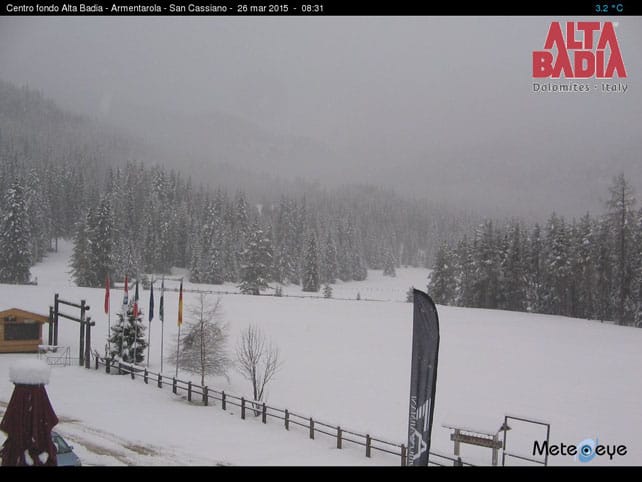 Tomorrow the action is due to shift north, to Austria and eastern Switzerland, with light to moderate falls expected to coincide with a short-lived drop in temperature. The white stuff should settle below 1400m for a time as a result. Here’s the current snow forecast for the Alps for Friday. 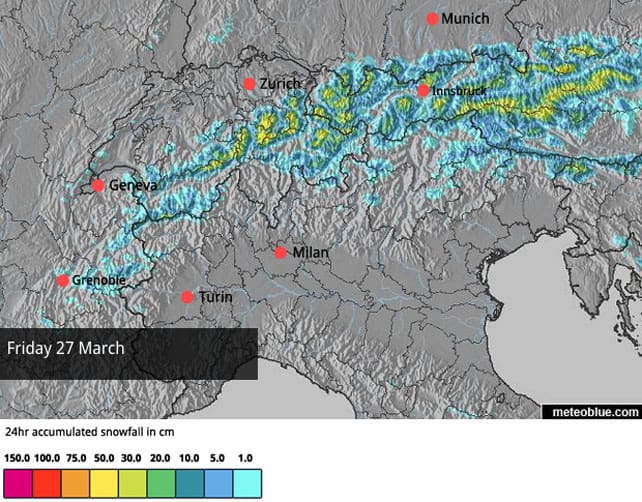 Welove2ski’s snow forecast for the Alps for March 27.

After that, it looks as though we’ll get a powerful storm from the west at the beginning of next week, which will drop heavy snow above 2000m and rain at lower elevations. After that, the outlook is uncertain, but it could get rather warm in the west. As ever, the best advice is to stay high whenever the skies clear, and get stuck into the new snow quickly, because you never know how long it’ll last. Don’t forget you can also have a lot of fun by adopting spring-skiing tactics at lower altitudes. 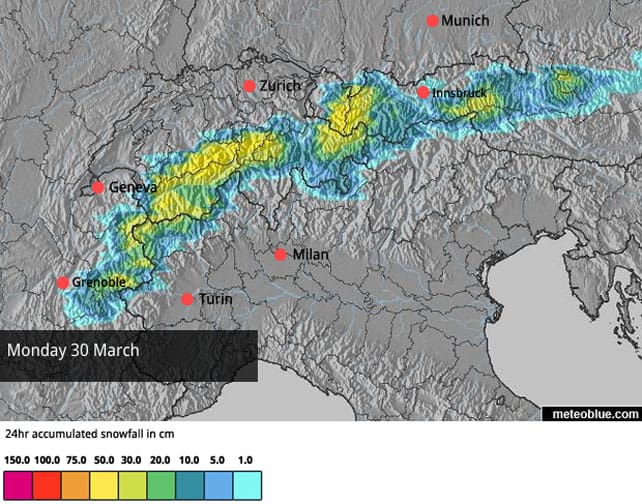 The snow forecast for March 30.

Across the Atlantic, it’s about to warm up again

There’s been a welcome respite from spring in the western US and Canada lately. Whistler, for example, was reporting 12cm of new snow in 48hrs yesterday, and 63cm for the week.

Meanwhile, this was how it was looking in Vail in Colorado yesterday, with 15cm of fresh snow on the pistes. 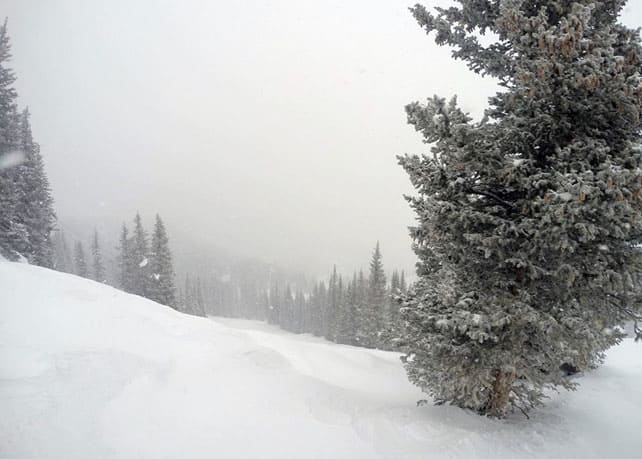 In Wyoming, Jackson Hole, was reporting 30cm of fresh yesterday. 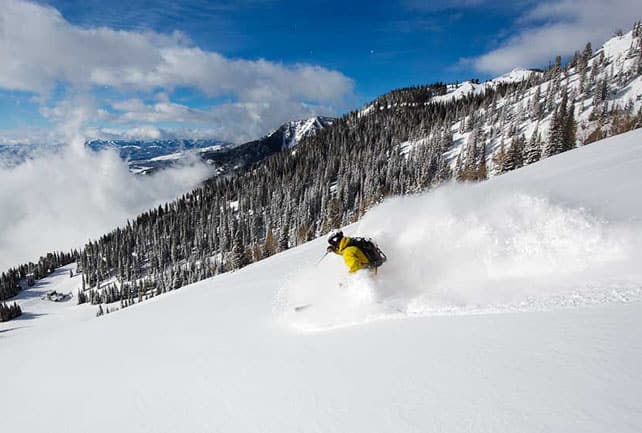 Despite delivering this welcome top-up, winter won’t be sticking around for long. Temperatures are rising again, and spring will be once again making its mark on the snow. There’ll be warm sunshine across much of the American Rockies and some rain in Whistler – although here, temperatures will drop back again at the weekend, and more snow is expected on the top half of the mountain.

No Responses to “Snow Report, March 26”