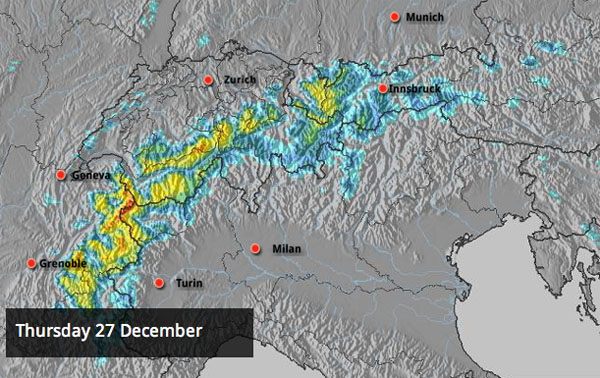 The Welove2ski Alpine snow forecast for today, December 27. Over 50cm could fall in places, at altitude.

The Alps are getting a late Christmas present today and tomorrow – in the form of drop in temperatures in and a decent dump of snow. Today, France, Switzerland and the Arlberg resorts of Austria will see the deepest accumulations. Our snow forecast reckons there could be nearly metre on the Mont Blanc massif and 50+cm in many French resorts. The Meteo France avalanche service thinks it’s going to be more like 40cm.

Tomorrow, eastern Switzerland and the Tirol/Salzburgerland borders in Austria will get most of the snow. 30-50cm are likely.

It’s going to be windy – very windy at altitude – at the height of the storm. And temperatures are likely to yo-yo about too. Meteo Chamonix expects the freezing level to move from 800m this morning to 1700-1900 metres this afternoon. But all the same – it’s a still a big relief that the worst of the thaw has been chased away. At the start of the week, it was more like Easter than Christmas, with the freezing level at 3000m and rain for a time above 2200m. Needless to say, the quality of the snow was affected – and in his Courmayeur snow report yesterday, Welove2ski blogger Paddy O’Powder grumbled that the thaw had turned “both the pistes and powder runs into knee-deep porridge”.

The change in the weather hasn’t come a moment too soon. Here’s a brief survey of today’s webcams to celebrate.

Fresh snow, but much visibility today in Tignes. Photo: © tignes.net. 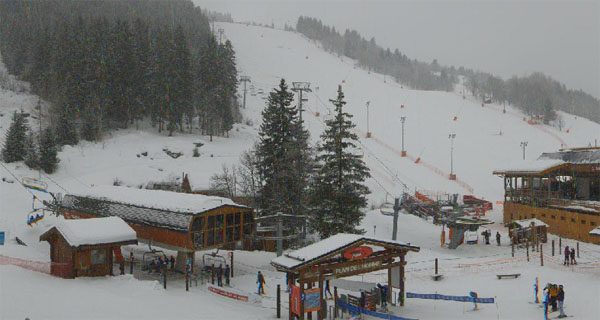 You can see more down amongst the trees in Meribel today. Photo: © meribel.net. 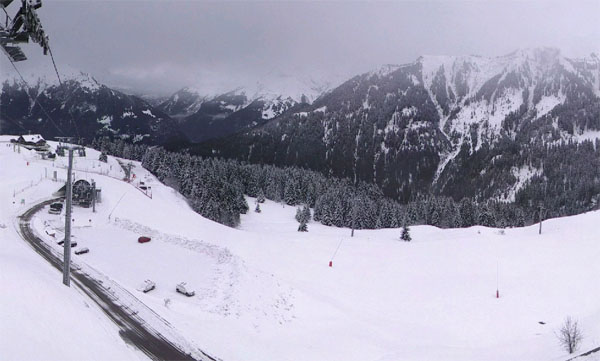 Signs of a welcome top-up of snow in Samoens in the Grand Massif. Photo: © grand-massif.com. 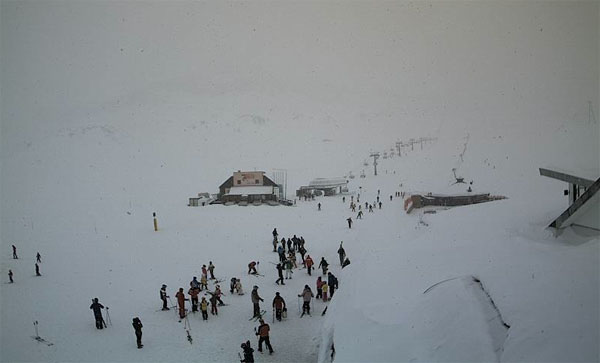 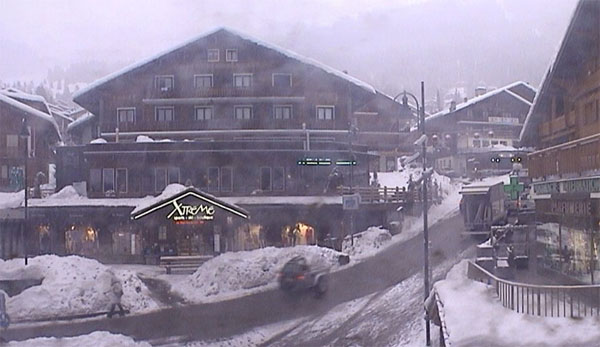 Heavy snow down to village level in Verbier this morning. Photo: © verbier.ch. 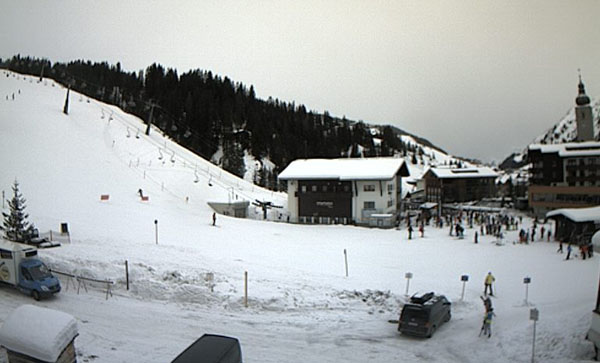 There was no sign of snow falling yet in Lech, in the Arlberg this morning. Photo: © lechzuers.at. 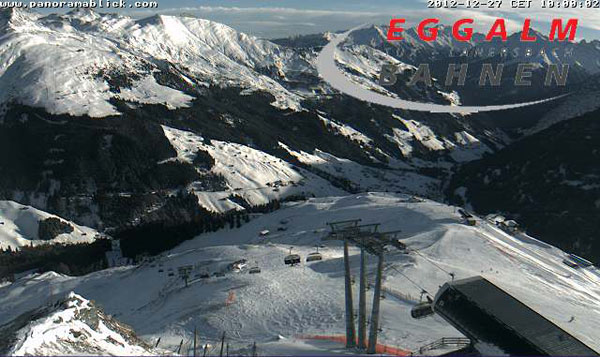 Looking north along the Zillertal towards Mayrhofen this morning. Photo: © panoramablick.com. 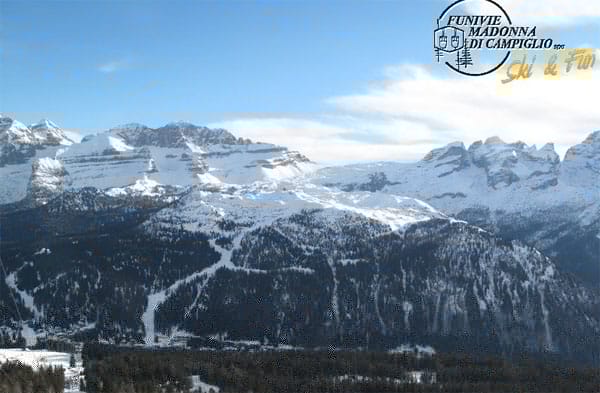 Clearly, in the short term, skiers in the northern half of the Alps are going to have stick below the treeline and/or hire a guide to get the best out of the conditions, whether they’re skiing on piste or off.

Thereafter, skies should clear on Saturday, and there could be more snow again on Sunday and Tuesday/Wednesday next week. However, it’s worth noting that, for the time being, there’s little chance of a return to the really wintry weather we saw in the first half of December. The lower resorts look set to suffer a bit from see-sawing temperatures, with further bouts of rain expected at village level. Aim high for the best snow – but be prepared for stormy conditions from time to time. Ideally, you want a resort which has plenty of high-altitude skiing, above 2200m, but trees lower down for the days when there’s a white-out.

By way of contrast, up in Scandinavia, the thaw has passed them by completely. In Are, Sweden today, it’s -5C on the shores of the lake and -9C on the top of the Areskutan – and what’s more 20-30cm of snow is expected today and tomorrow. Here’s how the resort is looking today from the far side of the lake. 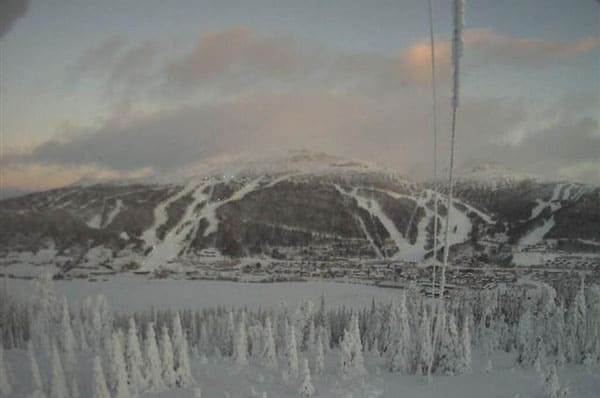 A wintry morning in Are, Sweden. Photo: © skistar.com.

Across the Atlantic, it’s been wintry too. The Californian resorts have been walloped by two separate storms which have dropped up to 172cm of snow on Heavenly, 193cm at Kirkwood and 150cm further south in Mammoth. Here’s the lastest video from Heavenly.

Meanwhile, in the Rockies it’s been frigid. Breckenridge in Colorado has had 30cm of snow over the last week, and is expecting temperatures today to be around -21C, once you’ve factored in the windchill. The settled snow depth there is 84cm, mid-mountain. That’s beginning to look respectable, after a slow start to the winter in Colorado. In Utah, Snowbird reports chilly conditions too – and a further 36cm of snow in the last 48 hours, to add to the 25cm that fell immediately before Christmas. There’s now 172 of settled snow on the mid-mountain trails. 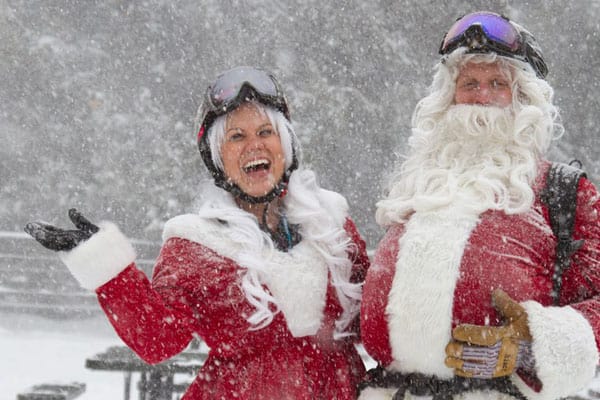