Skiing at Easter: Why It Rocks and Where You Should Go 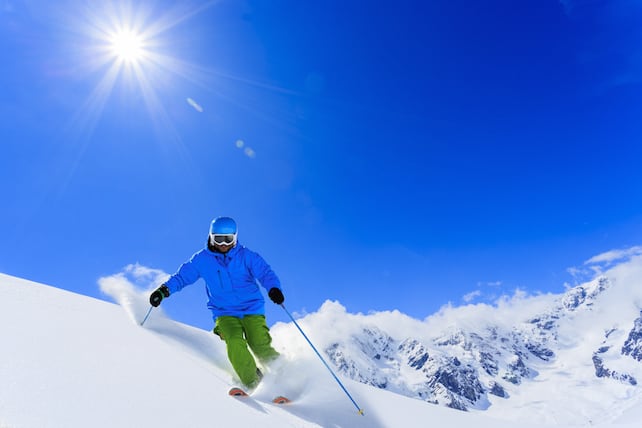 Xavier Schouller, MD of Portsmouth-based ski-drive specialist Peak Retreats, knows a thing or two about skiing. He grew up in France, first put on skis as a child in Val Cenis, and has been flying down the mountains in the both the Alps and the Pyrenees for the past 43 years. He has two young children.

The secret to good Easter skiing trip isn’t solely a question of aiming high. Ski areas which have above-average snowfall are also worth considering – such as the Grand Massif. It’s close to Mont Blanc and (along with Avoriaz) is first in line when storms from the northwest hit the Alps. It has its own snowy micro-climate as a result.

You should also look for those resorts with north-facing slopes like Val Cenis – because the snow on them stays colder for longer. A glacier is always useful Easter-skiing insurance as well. In France, both Tignes and Les Deux Alpes have one.

Recent investments in snow-cannons mean that many resorts have snow left as late as May. When the lifts finally close they have to send piste-bashers out to actually remove snow as otherwise the farmers would go mad – as was the case in Val Cenis for a few years!

Skiing at Easter has many advantages over mid-winter holidays. Here are a few of them: 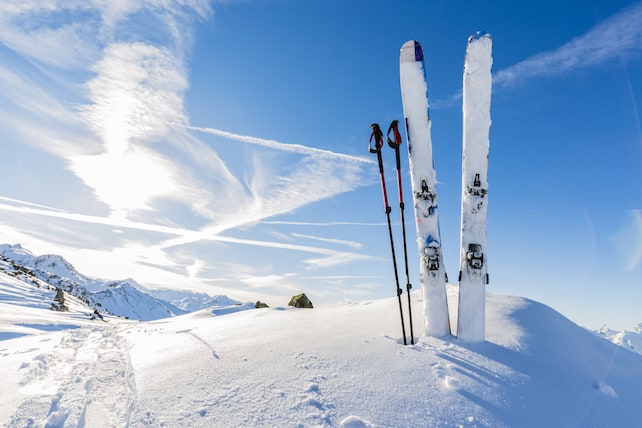 The Weather Is Sunnier

This means you have longer days, can cut down on bulky layers of ski clothing, and it’s a better time to learn to ski – especially for families with young children.

It’s much more fun having a lesson when you’re warm – inevitably there’s a lot of standing around during the initial learning stages and a harsh winter’s day when the thermometer plummets way below zero this can be a real challenge.

You Can Eat Lunch Al Fresco

Bring out your sunglasses and T-shirts at lunchtime, be generous with the sun cream, and take in the gorgeous mountain views on a restaurant’s lovely sunny terrace. If you are on a tight budget, picnic lunches become a delight rather than a financial necessity.

Generally that’s true, but remember that there are also snowy days – and occasionally some of the heaviest snow of the season comes in April. Best case scenario is to wake up to a clear blue sky each morning after a night of fresh snow!

The Lifts Are Open Later

Daylight hours are lengthier too, so you can have a relaxed lunch and ski for that little bit longer. The Easter fortnight is popular in some resorts, but slopes are still positively empty compared with peak winter dates.

This is not a peak time so prices are lower, especially when compared with the February half term or Christmas holidays. Mid-March is usually as cheap as mid-January and in April some resorts even drop their lift pass prices for the Easter ski holiday weeks. You can also pick up some pretty good bargains in ski shop end-of-season-sales.

Driving Out Is Easier

As you reach the mountains you’re less likely to come across roads closed due to too much snow, and you might not even need snow chains (although I always recommend people take them, just in case).

But which resorts should you go for? These are my picks in France for Easter skiing…

La Rosiere, together with the linked resort of La Thuile on the Italian side of the Petit St Bernard pass, is something of a secret snow pocket. Due to a micro-climate created by the Mont Blanc Massif, both resorts habitually get better snow-cover than many of their neighbours.

Some great nursery slopes for beginners at Les Eucherts with three free ski lifts. The village has received the highest official Famille Plus Montagne award. 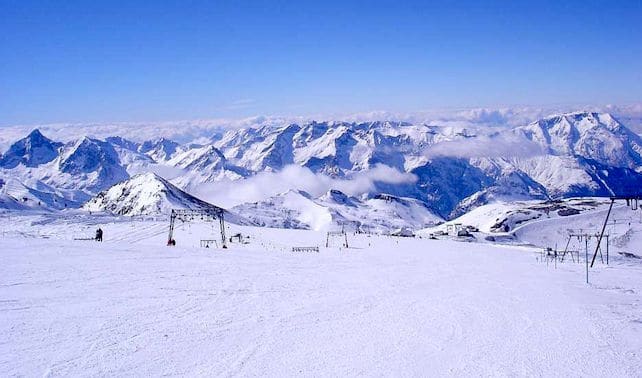 The Jandri Express jumbo gondola whisks you up from the village of Les Deux Alpes to an underground funicular station at 3200m for the final ride to the top of the glacier.

Some of the easiest skiing is up here, which means that complete beginners can learn high up on snow-sure slopes with lovely views, rather than on the sometimes slushy lower nursery slopes of many other resorts in spring time.

Beginners have a choice of learning either on the glacier with wide easy runs or on the nursery slopes next to the village. There are five free lifts on the lower slopes.

The family-run Cote Brun hotel offers half board accommodation and is located at the foot of the pistes. It has a large south-facing terrace and a spa area.

Montgenevre is snowier and a lot more charming than its Italian neighbours in the Milky Way – such as Sestriere and Sauze d’Oulx – and there are some excellent places to stay. The ski area suits intermediates and families best of all.

Beginners have a good selection of gentle nursery slopes in Montgenevre, with reliable snow at the foot of the north-facing area. There’s also an open-air ice rink in the village.

Hameau des Airelles are four-star apartments in a traditional-style residence right by the slopes. It has an indoor/outdoor swimming-pool and a spa.

The back door village of the giant Paradiski area is half-way between La Plagne and Les Arcs. You can choose to stay either in Plan Peisey, which is the departure point of the giant Vanoise Express cable-car, or in Vallandry at the edge of the forest.

This is a good place for families to base themselves and both resorts have nursery slopes higher up in the tree-line, which are accessed by a chair-lift.

Arollaie apartments are at the foot of the Vanoise Express cable-car, so they’re convenient for skiing the entire area. There’s a pool table and a heated indoor swimming-pool here. 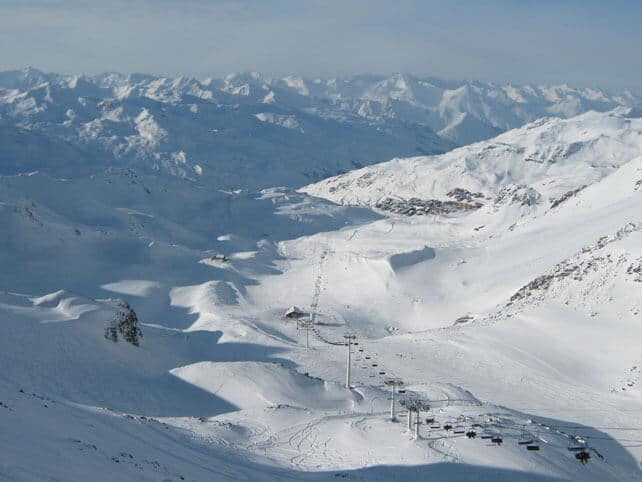 Set at 2300m, the resort of Val Thorens is the highest in Europe – and in five separate places, the lift system rises to 3000m or above. Many of the pistes face north, and next door you’ll also find Les Menuires and Mottaret, which are part of the same Three Valleys ski area. Together, they offer one of the most extensive and reliable Easter playgrounds in the Alps.

There are drawbacks. Because of its setting in an steep-sided bowl, Val Thorens is a high-rise, high-density place, and with all the slopes above the treeline, it can feel a little bleak when the clouds come down. But that hasn’t held it back recently: there’s been a lot of investment here, not just in hotels, lifts and apartments, but restaurants, too. The resort is now the winter home of three Michelin-starred chefs.

The resort has a purpose-built 10-hectare area with four covered magic carpets, aimed at beginners, and you don’t have to buy a lift pass to use it. Meanwhile at the Galerie Commerciale de Caron, there’s a big sports centre with two pools, a soft-play area and trampolines.

Le Hameau du Kashmir is recently built and has its own pool, games room and an excellent restaurant, “Le Karmin”. 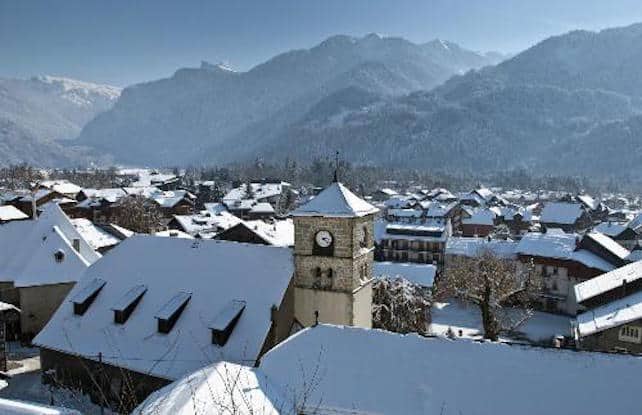 The Grand Massif, which Samoens is part of, is one of the largest ski areas in France and boasts a super-snowy microclimate – thanks to its proximity to Mont Blanc.

Samoens isn’t a ski-in ski-out resort like neighbouring Flaine – it’s a proper town with bags of character and a life outside skiing.

Yes, you have to take a cable-car up into the ski area at the beginning of the day and another one down again at the end of the day, but how many resorts can guarantee being able to ski back down to the village at Easter anyway?

The nursery slopes are north-facing and reinforced by snow-cannons when needed.

There’s a nursery slope at Samoens 1600, with seven lifts and a new travelator. The beginner sector is separated from the rest of the ski area, making it extra safe for little ones.

La Reine des Pres apartments are a 400-metre walk from the cable-car. It has an indoor swimming-pool and a spa. 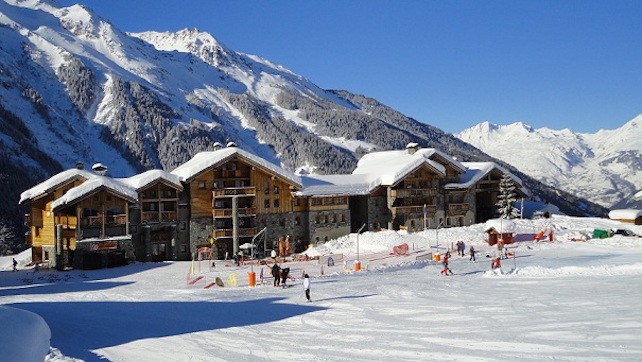 The chalet-style village blends old with new and is close to Tignes, Val d’Isere and Les Arcs.

The ski area is known for its off-piste – and locals head over here from the bigger resorts nearby on powder days. This is because Sainte Foy has mainly north-west facing slopes, so the powder stays fresh for days.

There are some gentle green and blue runs through the trees, and it’s a wonderful resort for beginners and families as it’s a lot less crowded than the better-known resorts.

Etoile des Cimes apartments are in the centre of the village and at the foot of the slopes. There’s an indoor swimming-pool in the building. 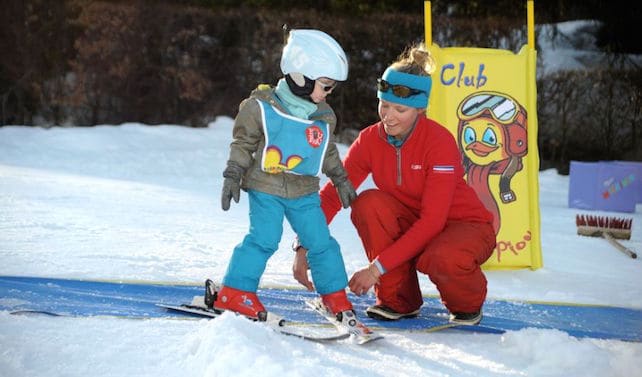 The snow-sure resort has summer skiing on its glacier, and is one of Europe’s 20 highest ski areas, so it makes an ideal destination for Easter holidays.

In good weather, intermediates will have a ball in Tignes. The wide pistes are served by fast lifts that get you to and from next-door Val d’Isere. Several British ski schools operate in the resort.

Tignes-les-Boisses (also known as Tignes 1800) provides a quieter base than the more mainstream Tignes-le-Lac or Val Claret. There’s a new beginners area and, once they’re more confident, novices can easily take the gondola into the rest of the ski area.

Kalinda Village has extremely comfortable apartments that are bigger than average. The residence houses an indoor swimming-pool and spa, mini-market and bakery, creche, ski school office and a ski hire shop.

This little-known resort of Val Cenis was one of the very few with a high percentage of slopes open that first week of the Christmas holidays, when a lot of other places were struggling. It has north-facing slopes, which are part of the reason.

There are ten green runs, as well as some long blues. Prices are very reasonable here, as the resort is in the Maurienne Valley which is off the beaten track.

Little Vaujany is an example of a satellite resort with access to a very high-altitude ski area – in this case that of Alpe d’Huez. A vast cable-car transports you into the heart of the ski area in next to no time.

The small farming village has hardly any traffic and is completely unspoilt, with a pretty church and chalet-style buildings. At Easter the village can be completely spring-like, with hens and goats roaming around, but you’re whisked straight back into winter when you take the cable-car into the ski area.

The resort’s facilities include a sports centre with a 25m swimming-pool, sauna, steam room, fitness hall and an ice-skating rink.

Les Balcons de Vaujany apartments are inside four chalets right by the cable-car. They have been built in the typical mountain style of the area.

When Is Your Favourite Time Of Year To Go Skiing?

Do you agree with me that Easter is one of the best times to go skiing or snowboarding, especially for beginners and families? Let me know about your spring skiing experiences in the comments below.

Xavier Schouller is founder of Portsmouth-based ski-drive specialist Peak Retreats. He first put on skis as child in Val Cenis, and has been pounding down the mountains in the both the Alps and the Pyrenees for over 40 years. For more information, head to Peak Retreats.

4 Responses to “Skiing at Easter: Why It Rocks and Where You Should Go”