Well, look at this Snowfiends. Tomorrow’s snowfall is going to be more widespread than we first thought: and the French Alps will see the white stuff as well as Switzerland and Austria. 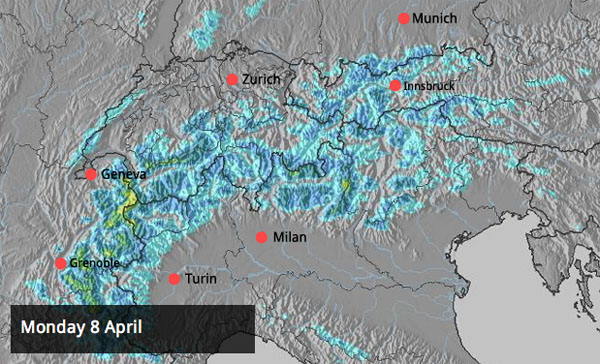 Pictured, above, is Tuesday’s snow forecast for the Alps. What it doesn’t show, however, is that there will also be heavy rain at lower elevations. There could be some thunder thrown into the mix too. Conditions are going to be tricky, to say the least.

Once Wednesday comes, however, the skies are set to clear, and skiers in the high-altitude resorts of France, Switzerland and Austria can look forward to a fresh coating of snow and – for the first couple of hours – cooler, more wintry conditions. It won’t stay like that for long, though. By lunchtime, the freezing point is expected to be back at 2900m and it’ll be time to adopt spring skiing tactics again. It’ll then stay sunny until Saturday, when another snowy interlude is expected.

I’m skiing in Tignes this week, courtesy of Mark Warner, and I’ve been reminded what a fantastic place this is to ski in April. Not only is there still lots of snow on-piste, but there’s a big choice of aspects too. In other words, you can start the day on east-facing slopes, move on quickly to those facing south, and finish for a late lunch looking north. Provided you get your timing right, you’ll get just-melting snow right through till 1pm. It’s a joyous, no-fear surface to ski: almost as good as the soft, cold, crumbly stuff of mid-winter.

Then, if you’ve still got any life in your legs, you can migrate up to the glacier where the snow is (just) high enough to have avoided the daily freeze-thaw cycle. Up there, it’s soft and grippy all day. 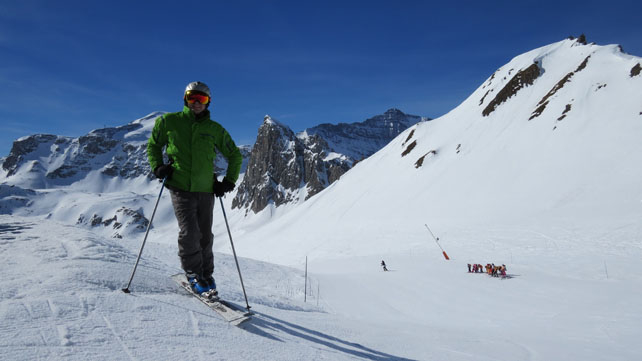 The start of a superb morning of spring skiing. Photo: welove2ski.com

It should be a cracking week. Provided no-one gets zapped in a thunderstorm tomorrow…


Here’s a quick sample of the afternoon webcams. You’ll notice I’m sticking to the high-altitude resorts. Except for a brief wintry interlude around March 24, this has been a warm spring, and the only place to be skiing now is high up. In fact, the lower resorts are shutting down now – the Skiwelt in Austria shut its pistes last week, for example, while only 19% of the lifts in the vast Dolomiti Superski area are still running today. If you’re planning a last-minute trip, then you’d better check our feature on the best resorts for spring skiing for advice on where to go.

Pictured below is how it’s looking on the glacier in Les Deux Alpes at the moment: as you can see, the cloud is already moving in as the weather begins to turn. There’s currently 210cm of settled snow at altitude here.

Meanwhile, pictured below is Cervinia in Italy, which shares its ski area with Zermatt in Switzerland. The links between the two are likely to be shut by the bad weather tomorrow, but there’ll be some cracking skiing up here when the skies clear on Wednesday. Currently, Cervinia reports 60-300cm of cover, on-piste. 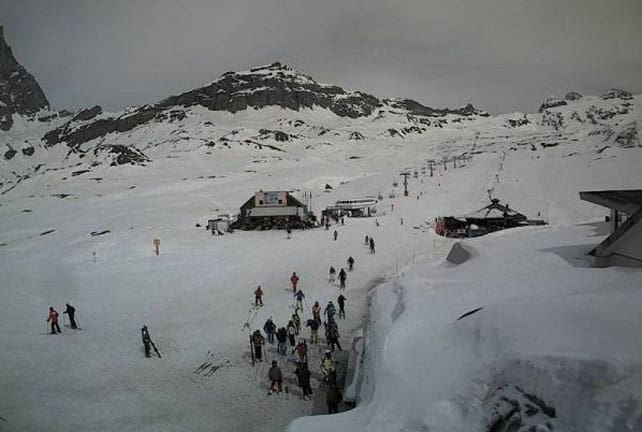 Finally, pictured below is Obergurgl, where the sun’s still out and there’s currently 34-116cm of snow, on-piste.

Readers of recent snow reports will already know that late March and early April in the western US have been blessed with plenty of powder. So much snow has fallen, in fact, that this year the closure of Jackson Hole in Wyoming – in line with its usual practice of shutting at the start of April – looks completely nuts. Yesterday, the resort shut down with a stonking 281cm of snow bedded down on the mountain, and a final flourish of powder… 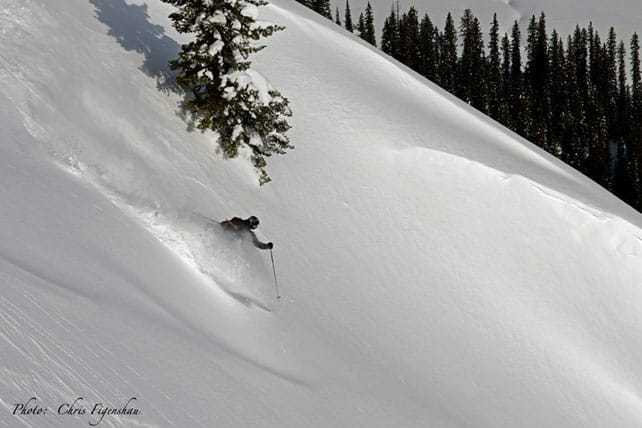 There’s been fresh snow in Colorado and Utah, too. In Breckenridge, for example, they reported 18cm for fresh snow yesterday, and a mid-mountain snowpack of 257cm. In The Canyons there was a 10cm top-up of snow, and the mid-mountain base is currently182cm deep.

One Response to “Snow Report, April 7”