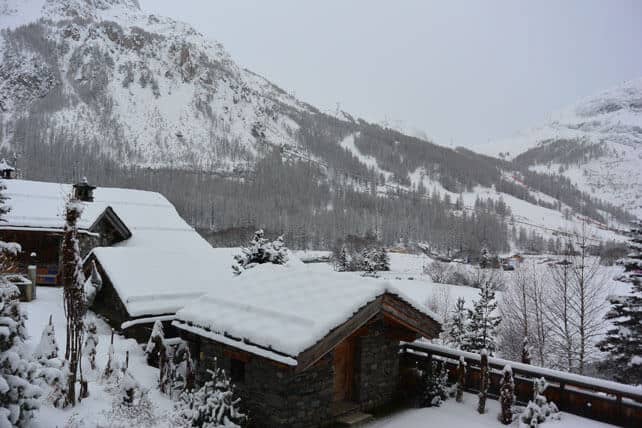 Val got its top-up thanks to a weather front that hit the north-western Alps yesterday lunchtime and left about 15cm of fresh snow on the slopes. Elsewhere in the northern half of the French Alps there was 10-20cm of the white stuff, and parts of western Switzerland got about 15-20cm. Further east 5-10cm was more normal. In Austria, Lech had 10cm and Ischgl 5cm.

Sadly, despite the snow in the higher resorts, this has not been a dump to save the early season lower down. As anyone who’s read a snow report recently will know, there’s been very little snow below 2000m in the Alps, and many lower resorts have struggled to open. Some have stopped trying: for example, both Les Gets and Morzine won’t be opening any pistes this weekend, and guests will need to shuttle over to neighbouring Avoriaz by bus and gondola to get any skiing. Others have only a handful of pistes open. The snow that fell yesterday – down to 1200m in places – isn’t nearly enough to rectify the situation, especially as another mild spell is on the way. In the western Alps, the snowline will shortly go scurrying back uphill, and the snow cannons won’t be able to work as hard as they need to, to make up the deficit.

Higher up, however, the snow has had an impact. Val Thorens, for example, already had all its pistes open, and yesterday’s 20cm top-up has pepped the pistes up nicely. The skiing’s improved in Val d’Isere, too, where 41% of pistes were open today. There will be more on tap once the World Cup circus has left town on Monday. Further east, Cervinia missed out on yesterday’s snow, but has 140cm packed down already on its mid-mountain pistes, thanks to big mid-November storms. Meanwhile, in Austria, Ischgl has 117km of skiable pistes. 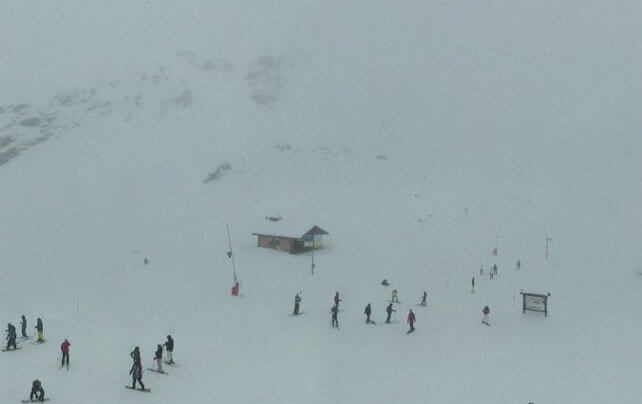 Val Thorens this afternoon. Yes, it’s murky, but the pistes have had a 20cm top-up. Photo: valthorens.com

French forecaster Meteo Chamonix reckons the freezing point in the French Alps could be reach 2900m tomorrow, before dropping back to slightly more seasonable levels at the weekend.

Further east, it will be cooler, and it now looks as though there will be snow in Austria on both Saturday and Sunday. Here’s our snow forecast for December 20. 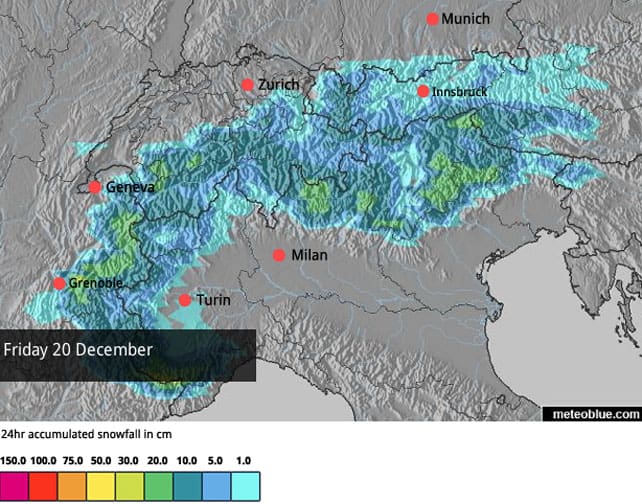 The Welove2ski snow forecast for December 20. If Mother Nature delivers, it’ll be a much needed tonic for Austria.

Annoyingly, Austria will also see a jump in temperatures on Monday, and it’s likely the whole of the Alps will suffer a mild, sunny spell until Christmas Eve. At that point there’s a chance – but only a chance – that this miserably mild and inconsistent weather will clear off and let some proper snowstorms in. But I wouldn’t bank on it yet. If you’re planning an early-January trip, think “altitude”, and aim for resorts where the pistes are already open in quantity.

Here’s a quick glance at the afternoon webcams.

Below, is how it was looking in Tignes, France at lunchtime. There was was 14cm of fresh snow in the resort and 20cm on the glacier today. Snow depths are still thin, but any snow at the moment is going to help. The coming thaw will have an impact here, but it will much less pronounced then in the lower resorts. 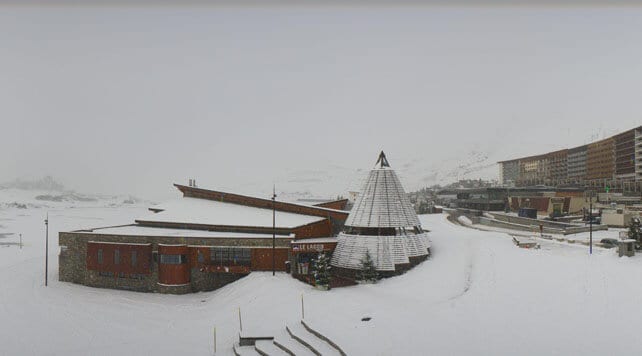 Pictured below is Lech in Austria, where the snow is just 25cm deep on the mountain pistes, and 10cm deep in the valley. Only two pistes are currently open here, and a further two pistes in neighbouring Zurs, although more should be opening at the weekend. 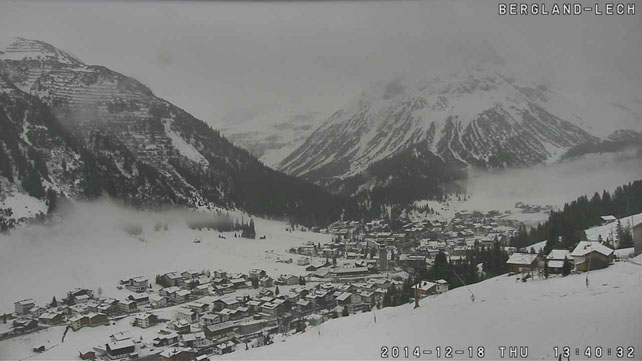 Finally, below is Madonna di Campiglio, just west of the Brenta Dolomites in Italy. Along with Passo Tonale, nearby, it’s had several private snowstorms of its own, and two metres of snow have fallen here since the start of the season. At 2250m, the snow, on-piste, is a respectable 95cm deep as a result, although it’s much thinner lower down, thanks to the long spells of mild weather. 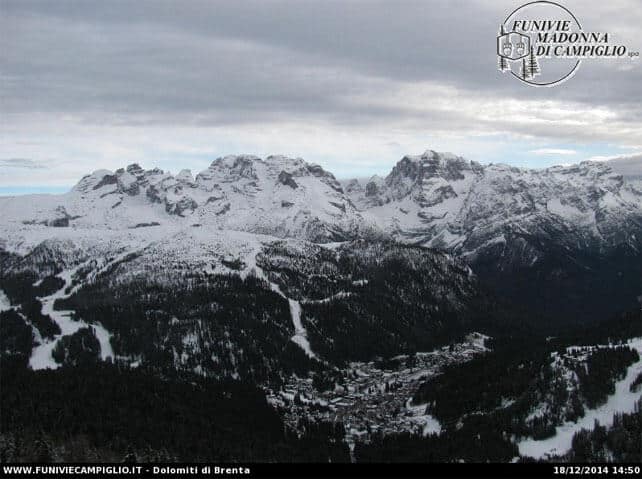 Exciting times ahead in North America

Meanwhile, across the Atlantic, the powder monkeys are rubbing their hands together with glee at the forecast for next week. It’s not an absolute dead-cert yet. But the signs point to a strong, moist north-westerly airflow, bringing abundant snow to many key resorts across the Canadian and American west. The action starts tonight in the Pacific Northwest, where Whistler could see around 14cm of snow on its upper slopes. But it gets going in earnest on Saturday (when Whistler expects to get another 22cm), and will spread south-east, through Montana, Idaho, Wyoming, Utah and Colorado. To start with the air will be a little mild, but in northern Utah local forecaster Evan Thayer reckons 30-60cm of snow could fall a result. Open Snow’s Joel Gratz is hoping for a similar amount in Colorado. Then, over Christmas, a bigger, colder storm is on the cards, with perhaps even more snow.

It’s not fair is it? Out west, the first half of December was rather mild, but at least most resorts got a decent base of snow down in November, unlike their most of their rivals in the Alps. Parts of California and the Rockies also saw significant top ups last weekend. And now this. It looks as though Christmas will be very festive this year.

Here’s some video to make you sick with envy from Vail – which was shot on Monday. The resort reports 53cm of snow in the last week. Expect to see plenty more of this, if the forecast holds good.

And here’s some upsetting footage from Breckenridge, where the terrain on Peak 6 is now open. Breck has had 38cm of snow in the last week.

No Responses to “Snow Report, December 18”