The Matterhorn this morning, above Zermatt. Photo: © zermatt.ch.

Happy new year, Snowfiends, and welcome to the first snow report of 2013 – which comes to you drenched in January sunshine.

For much of the skiing world, clear skies will be the theme of the next few days. The break in the weather will probably come as a profound relief to the locals: after all, it’s been pretty stormy there since the end of November. Many holidaymakers will lap it up too. Only those who care as much about the quality of the snow as the scenery will be grumbling: because in the western Alps especially, the sunshine will usher in another period of unseasonably high temperatures.

Short-term, there is one exception to this picture: Austria. Some places in the Tirol could see 30-50cm of snow between tomorrow and Sunday. Unfortunately, there’s there’s going to be rain lower down to start with, but later the snowline should drop down to village level. (Which is great news for me, as Welove2ski is headed to Kitzbuhel on Sunday. Thank you, snow gods!) 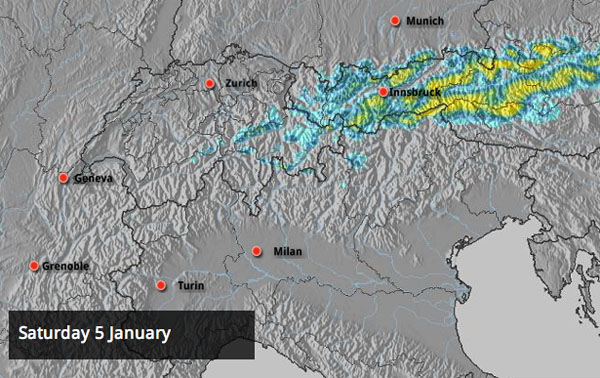 Fresh snow for Austria. The Alpine snow forecast for January 5.

Elsewhere in the Alps, expect dry weather until this time next week, and steadily rising temperatures. In France, the freezing level in France is expected to be 2500m today and up to 3200m on Sunday. In western Austria, it’ll be around 1800m today and 2100m on Sunday.

Snow depths are still very good for the time of year, thanks to the big dumps of early December. But let’s not forget how warm the weather was over Christmas. There was a top-up of 10-15cm of fresh snow on Tuesday in France, Switzerland and eastern Austria, which refreshed the pistes and on sheltered slopes may even have covered the crusty surface, off-piste. But conditions will become more variable again as temperatures rise. Aim high for the best skiing surface, and stick to shady, north-facing slopes (unless they’ve been blasted by the wind).

Here’s a brief survey of recent webcams and pictures. 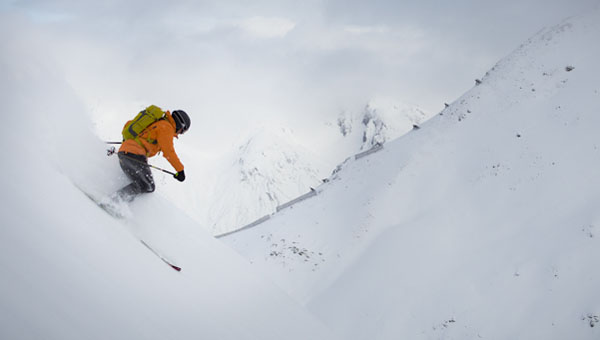 The slopes of Rendl, above St Anton yesterday. Up to 10cm of snow fell here on Tuesday, according to Piste to Powder. Photo: pistetopowder.com. 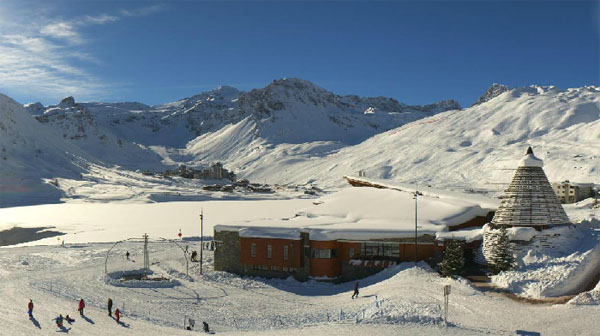 Tignes, today. The French resort has 130-250cm of settled snow on its slopes. Photo: © tignes.net. 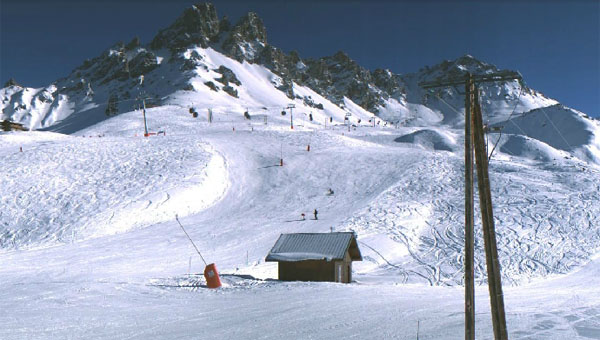 The slopes beneath the Saulire in Meribel, which reports 90-180cm of settled snow. Photo: © meribel.net. 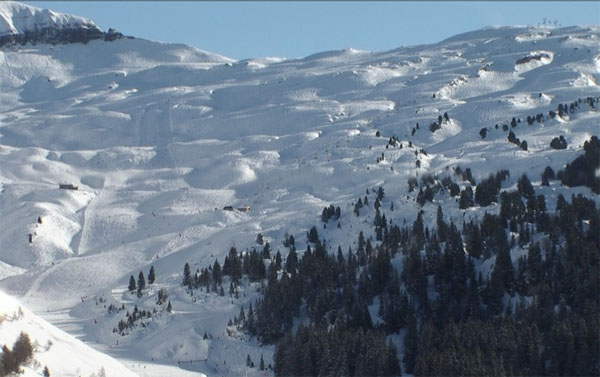 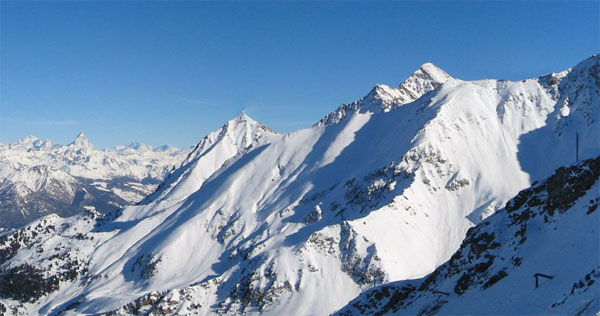 The view from the top of Pila’s north-facing bowl today. Photo: © pila.it.

The top of the world? No – just the view from Mont Fort above Verbier. Photo: © verbier.ch. 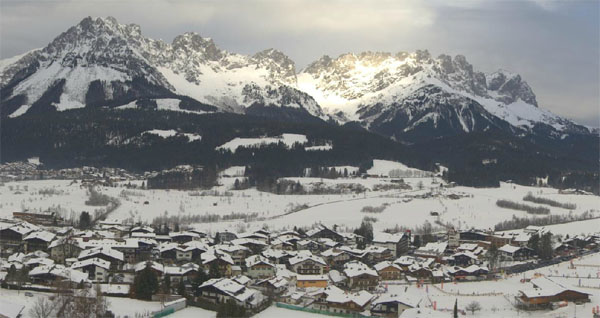 The Wilder Kaiser in Austria today – seen from the slopes of the Skiwelt. Photo: © skiwelt.at. 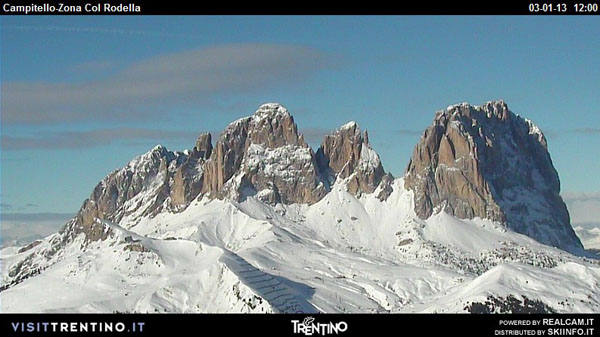 The massif of the Sasslong, between Canazei and Selva today. Photo: © visittrentino.it.

Medium-term in the Alps, it looks as though high pressure will dominate for a week now, before breaking down. After which, there’s a good chance that colder, more humid air will flood across the region again. Fingers crossed we get a sustained period of properly wintry weather after that. It is January, after all…

The current thaw has even reached as far as Scandinavia today. In parts of the ski area of Are in Sweden the temperature has rocketed to -1C – the first time for ages that the mercury’s crept above freezing point. Scorchio. 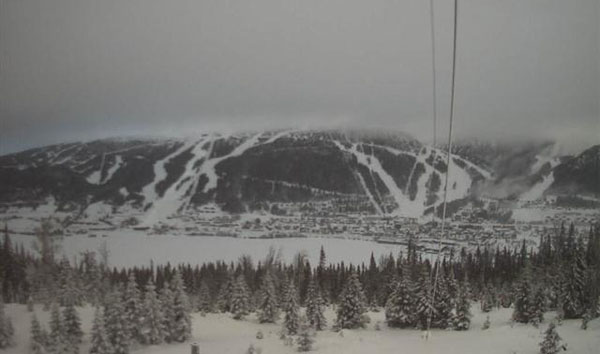 It may not look it, but it’s warmer in Are, Sweden today. Photo: © skistar.com.

Across the Atlantic, there’s sunshine too, and temperatures are set to rise slightly over the course of the week. Most regions in the west report good or excellent snow cover – except Colorado, where it’s still a little thinner than it should be for the time of year. 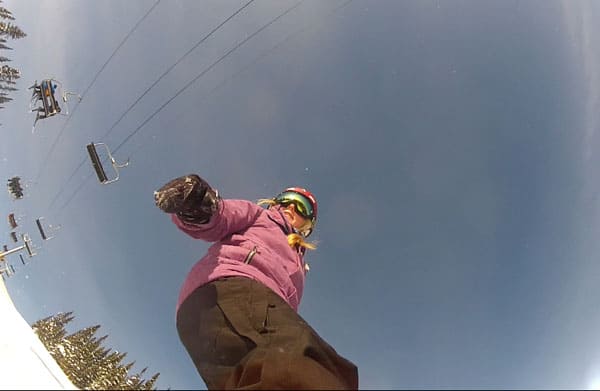 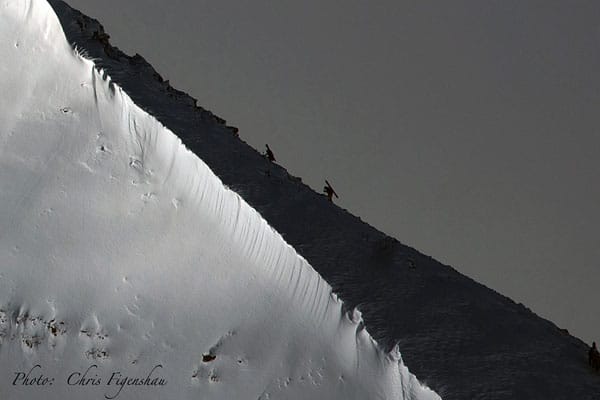