The Best Ski Resorts for Intermediates 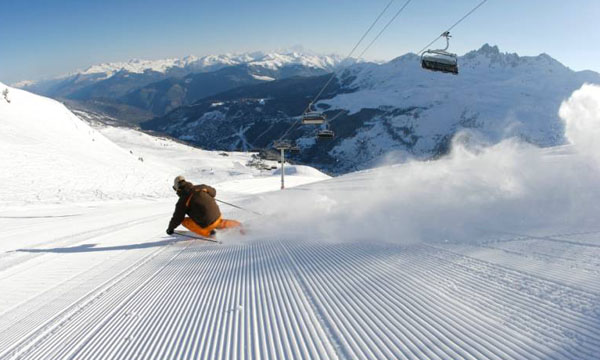 Which are the best ski resorts for intermediates? Well, that all depends on what kind of intermediate you are. Are you still a bit wary of reds (and blacks) and need gentle pitches and an uncrowded piste to build your confidence? Or are you kind of gung-ho skier who’s got the energy and appetite to explore almost all of a piste map – but can’t yet handle off-piste terrain?

Now all you have to do is be honest about your ability, and take your pick. 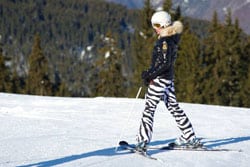 Smoothly does it
It’s the bit in the middle that makes Courchevel such a good choice for cautious skiers. Half-way down, the spectacular north-facing bowl in which it’s set suddenly flattens out – and turns into one of the widest and most soothing slopes we know. The main gondola up from Courchevel 1850 delivers you to the point where it suddenly gets easy, and you can ski laps until your technique is back on track.

Admittedly, over New Year and in February, this part of Courchevel gets busy. But there’s more of the same nearby: on the long blues under the Pralong chair, and above the neighbouring village of Courchevel 1650. Neither area sees anything like the same human traffic. Ski all three areas diligently for the first half of your holiday – all the while resisting the temptation to explore the rest of the Three Valleys – and pretty soon your confidence is going to soar. 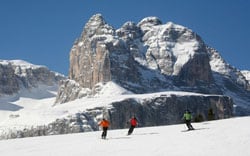 Why are the Dolomites so underrated?
The Dolomites are habitually underrated by British skiers: probably because they lack the hard-skiing, hard-partying cred of the likes of Val d’Isere, St Anton and Verbier.

But actually, they suit most of us much better than the big-name destinations. After all, not many once-a-winter skiers can ski backwards down a half-pipe, or stay upright in 40cm of fresh powder. What they need is wide and well-groomed pistes, with spectacular scenery and delicious, affordable food on tap to add extra sparkle to the day.

In that respect, resorts like Corvara and Canazei (see below) lead the world. Of the two, Corvara works best for more hesitant skiers, because it sits next to the easiest piste skiing in the area – across the flat-topped plateau of the Alta Badia. Warm your ski legs up there, do the famous Sella Ronda circuit in the middle of the week, and then – who knows? Maybe you’ll be skiing the (off-duty) Saslong World Cup course in the Val Gardena by Friday. 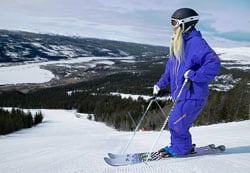 Cute town. Empty slopes
Never forget – overcrowding will freak you out as much as the pitch of a piste, if not more. With speed freaks zipping past your shoulder every other second, it’s hard to focus on your ski technique. Pretty soon, your  demons will come out shrieking from the backblocks of your mind, and you’ll be too frazzled to manage more than a controlled skid.

That’s why Are in Sweden is such a canny choice. In terms of its size (100km of piste) it’s no match for the big ski circuses of the Alps. But it’s well-equipped with gentle, ego-boosting pistes, and outside the key school holiday weeks the slopes are empty. Not quiet: empty. Away from the most popular runs under the VM6 chair-lift, you’ll be carving the corduroy with just one or two other skiers for company. It’s a blissful feeling – given extra depth by the views of vast, unpopulated landscapes stretching away from the resort to the north and west. 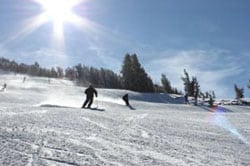 It’s the gentle blues that you’ll remember
Skiing and California are not words that commonly come together in skiers’ minds – especially those who are still mastering their parallel turns. But they should. Lake Tahoe, a couple of hours east of Sacramento, is a singular and memorable ski destination – and Heavenly, its largest resort, is something of a cautious intermediate’s paradise.

There’s plenty of tougher stuff here too – notably, down the million-mogul run called Gunbarrel. But what this place does best is gentle, confidence-boosting pistes set between the trees (so you can keep skiing when the weather closes in). Provided you’re not stressing about all the money you’ve lost in the casinos in South Lake Tahoe, at the bottom of the lifts, you’re going to have a ball. 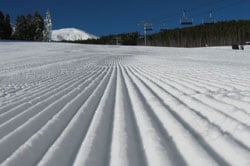 Is there a mountain more soothing than Peak 7?
Peak 7 in Breckenridge: if you’ve ever been spooked by a busy, icy, Alpine piste, then you need to put this fat, forgiving slice of Rocky Mountain skiing on your hit list.

Yes, like any mountain, it can occasionally be icy too. But from December to February the temperatures here are far more consistent than in most Alpine resorts: after all, you’re 1500-odd km inland, at an altitude of 3000m+. As a result the snow is usually cold, dry, and grippy – and it’s beautifully-groomed too. Ski it midweek, when the slopes are quiet, and you’ll feel like you’ve been born again as a skier. 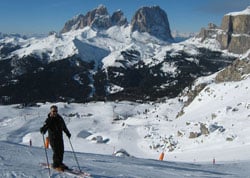 The quieter corners are heaven for carvers
Just like Corvara (see above), Canazei offers a compelling package of well-groomed pistes, top-notch food, and gob-smacking scenery. Only here the world has a bit more tilt. There are easy slopes aplenty – especially in the Belvedere sector, immediately above town, but if you want to crank up your speed a bit you’ve got several tasty options: on the World Cup downhill course in the Val Gardena, or on the steeper blacks and reds above Arabba, or on the valley run from Buffaure back towards Canazei.

And as a bonus you get all the skiing in the Val di Fassa nearby. This long, dramatic valley is home to several unconnected ski areas – above Moena and Vigo di Fassa, and at Catinaccio – which can be reached by bus (or hire car) – and hardly anyone skis on them. If you love getting your skis up onto their edges, so that their shape sends you carving across the piste as well as down it – and you don’t want to worry about crashing into anyone else when you do – then this is the place for you. 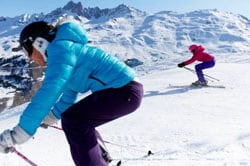 600km of piste on your doorstep
You need your wits about you in Meribel – for example, when you come hurtling down from the Saulire in the morning, and hit ice on the pistes above Mottaret. Or when you’re trying to get back from Val Thorens and get stuck in a river of human traffic. This is a big, bustling place, and the eastern side of the valley gets too much sun. To enjoy it, you’ve got to read the piste map intelligently, factor in the condition of the snow, and ski where others don’t.

But all the same, what a place. There you are, plum in the middle of the largest properly-interconnected ski area in the world. Open the door of your ski accommodation on the first morning, and the possibilities seem endless. Do you ski over to the Pointe de la Masse, creaming down the fast blues and reds above Les Menuires en route? Or storm down the Combe Saulire above Courchevel on an early morning Ride of the Valkyries run? Wherever you go, take sandwiches in a rucksack so you can ski when everyone else is indoors eating overpriced pizza, and don’t stop till the last lift closes. 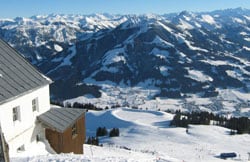 We love the Choralpe!
Small, cute and quietly magnificent: that’s the best way to describe little Westendorf. By rights, it should sit at the bottom of a tiny ski area that no-one’s every heard of. Instead, it’s plugged into the sizeable Skiwelt, which boasts 279km of piste. The combined ski areas of Kirchberg and Kitzbuhel are nearby too – which means on any given day you’ve got a total of 447km of groomed and waymarked runs to choose from.

So much for the quantity. But it’s the quality that really will really impress you – notably in the three sumptuous top-to-bottom runs on the Choralpe, Westendorf’s local mountain. Ski it in January or early February to have the best chance of top quality snow (because the altitude is quite low) – and make sure your legs are strong. Each descent drops through roughly 1000 vertical metres.

Austria’s steepest piste is just the icing on the cake.
Fancy yourself as a piste skier? Then prove it – on Harikiri, the steepest black piste in Austria. Fortunately, it’s not very long, and there’s a long smooth run-out at the bottom (so you won’t have to slide far if you fall). But it is icy more often than not – and the crux, which lasts three or four turns, will test anybody’s technique. Make sure your ski legs are warmed up nicely before you try it.

It’s not the only attraction for athletic intermediates in Mayrhofen. There’s another lovely, steady black (17 on the piste map) off the Horberg, as well as two timed gate-skiing tracks and some cracking reds at the back of the area that nearly everyone overlooks. But what makes the place really special is the fact that there are so many other interesting ski areas nearby, in the Zillertal. For anyone with a hire car and an appetite for ski safaris, it’s a mouthwatering prospect. 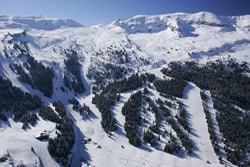 Questionable architecture. Underrated pistes.
Yes, yes, the modernist architecture of Flaine is uncompromising. But if you look beyond the concrete and you’ll see some cracking pistes. They’re pretty snowsure too. Flaine sits in something of a snowbucket – a big dimple in the mountain that snags any passing storm and keeps hold of it until it has shaken out lots of snow. As a result it has more reliable cover than any resort of comparable altitude in France.

Still, it’s best skied mid-winter: because that means you can get the full benefit of the underrated Grand Massif ski area it shares with several lower villages, including Samoens and Les Carroz. Altogether, there are 265km of piste to be skied here; and they’ll keep most skiers happy for more than a week. 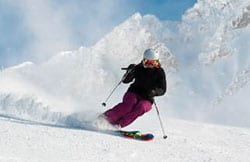 Compared to the big Alpine ski areas, Whistler isn’t so large. But it certainly feels like it on day one of your trip, as you make your first descent from the Whistler gondola. Look up, and in a single glance you’ll take in a vast panorama of trees and groomed, waymarked trails. You can’t help but whoop.

To get the best of it, you need to ski midweek, when nearby Vancouver is at work. You have to be prepared for every kind of weather too, thanks to Whistler’s maritime climate. But if you luck into the right conditions – and get stuck into the fall-line descents on the north-west face of Blackcomb, or the looong pistes down to Whistler Creekside – then you’ll quickly understand why this place is consistently rated number 1 in North America. 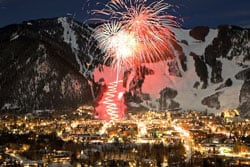 Two empty mountains in the middle
Given how many natural advantages Aspen has, it’s amazing how few people ski there. Probably, the ritzy image puts them off. So too the shortage of hotels – which keeps accommodation pricey.

For anyone who does make the pilgrimage, however, the lack of skiers is a huge advantage – because it keeps the pistes uncrowded. There are four mountains lined up for you to ski on, and the two in the middle – Highlands and Buttermilk – are especially quiet. Midweek, outside the Christmas and New Year Holidays, they’re all but deserted, and you can really let rip. Fact is, if you don’t enjoy your skiing here, then you should probably turn your ski boots into plant pots and take up tiddlywinks.

Right, that’s the destination sorted: what about your ski technique?

3 Responses to “The Best Ski Resorts for Intermediates”