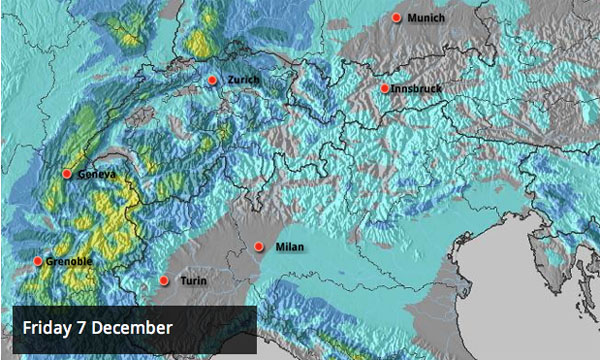 What a week! As anyone who saw yesterday’s bonus snow report will know, the north-western Alps have just been walloped by the white stuff. Over a metre has fallen in places – and there’s more to come – thanks to another weather front due in tomorrow.

Once again, the French Alps will get the lion’s share of the new snow – with over 50cm expected on Friday and Saturday. But every resort in the northern Alps should see some snow, and the frigid temperatures will continue. That’s great news for low-lying resorts – which will be able to make continue with preparations for the busy weeks of Christmas and New Year. As I mentioned yesterday, several of these lower resorts, such as Le Grand Bornand and Les Carroz, are opening at the weekend, ahead of schedule, for a season preview. Given the white-out conditions and bitter cold higher up, they might well be better places to ski – until Sunday at least, when the skies are set to (temporarily) clear.

And then, guess what? That’s right. It’s going to snow again. Another half-metre is in the forecast on Monday, and the goods will be more evenly distributed, with Switzerland and western Austria getting as much as France. The snow will peter out Tuesday and then – well, it’s anyone’s guess really. The mid-range forecasts keep changing. Yesterday they were predicting a more settled, less frigid spell. Today, the outlook is unsettled again. Either way, with all this snow falling now, Christmas/New Year skiers can be sure of good cover. The quality of the snow can always change, of course, according to fluctuating temperatures. But at least there will be plenty of it.

And of course, let’s not forget that next Tuesday, when the weather starts to calm down, conditions on-piste are going to be amazing almost everywhere.

(That said, the skiing off-piste could still be very dangerous: the avalanche risk is currently 4/5 in many French resorts, and if proof were needed of just how unstable the snow is at the moment, Le Dauphine has reported that two skiers were avalanched in Tignes yesterday. Both survived but one had suffered a cardiac arrest and had to be resuscitated.)

Below is a quick sample of webcam shots from across the northern Alps. In France, the clouds are lifting briefly today – there’s even some watery sunshine around, which will be a huge relief in the higher resorts. But it’s still snowing in Austria – good news for both St Anton and Lech, which open for the season today. 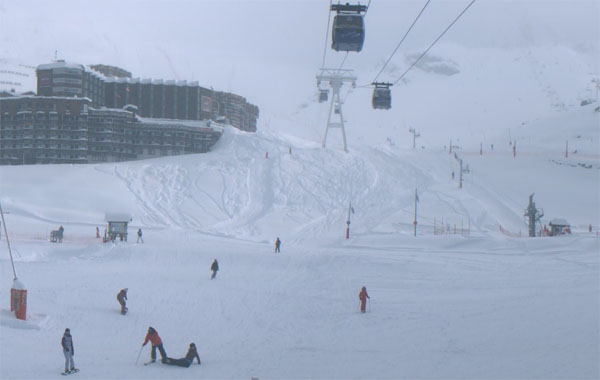 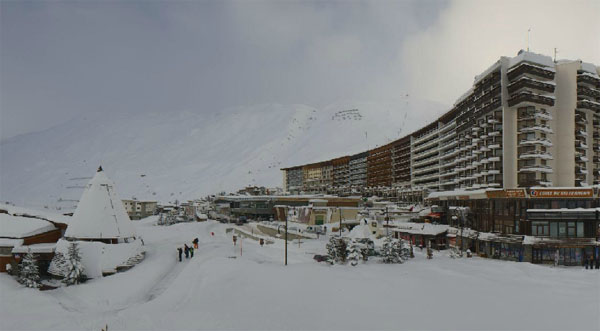 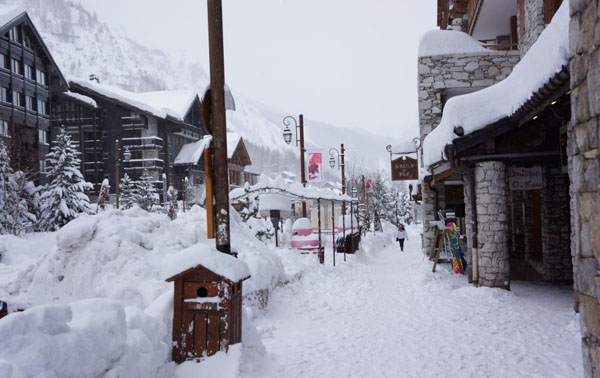 Hard to believe it’s the first week of the season in Val d’Isere. This was taken yesterday. Photo: © tdcski.com

Plenty of snow but not much visibility in Verbier today. Photo: © Verbier.ch 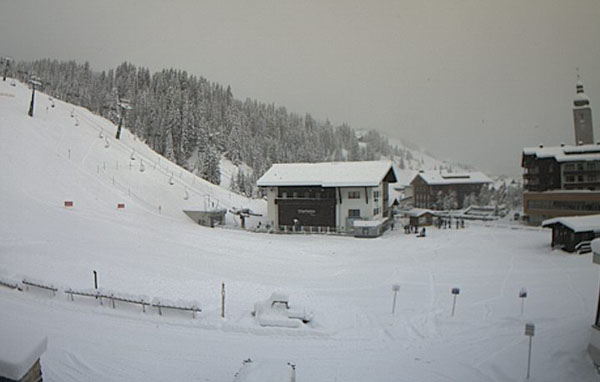 Opening day in Lech – with up to a metre of snow now lying on-piste. Lech. Photo: © annamarialech.at 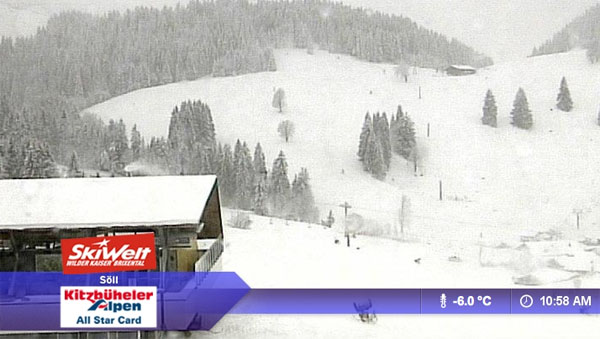 The slopes above Soll in the Skiwelt – parts of which also opened for the season today. Photo: © skiwelt.at

At the moment, sun-seekers will be much happier on the other side of the Alps, in the Dolomites where skies are blue and the visibility crystal clear. The lifts above Canazei and around the Sella Ronda are opening for the first time today, with 15-60cm of snow on-piste, depending on altitude. (There was snow here at the weekend – but blizzards affecting the northern Alps since Monday haven’t reached the region). It’s going to be lovely day for cruising the corduroy and soaking up the gob-smacking scenery.

The Sasslong massif, near Canazei, December 5. The pistes here open today for the season. Photo: © visittrentino.it

There are clear skies above Madonna di Campiglio, too, on the other side of the Adige valley in Italy. You may remember, the resort had 120cm of snow at the beginning of last week. 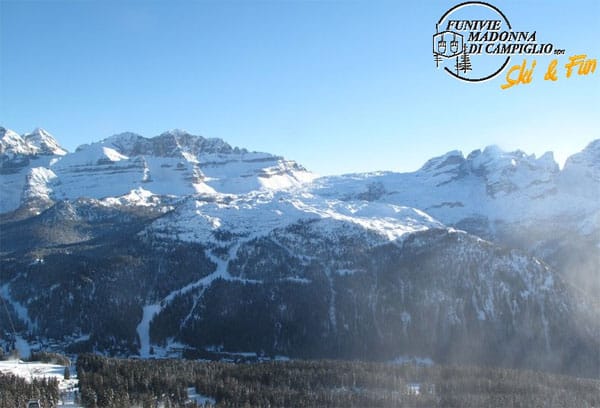 Meanwhile, in Are, Sweden… 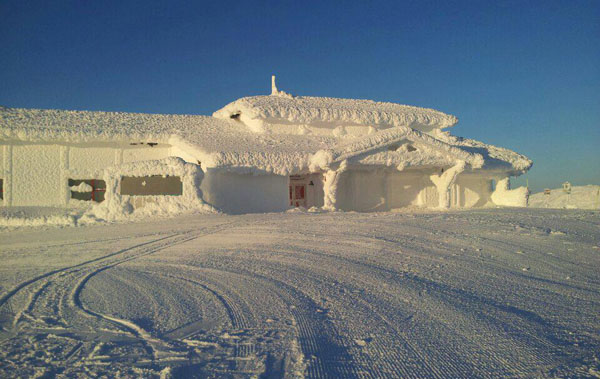 The top of Areskutan in Are, Sweden, December 3. It’s been a chilly week… Photo: © skistar.com

The photo, above, was taken at the top of the ski area on Monday – but the cold snap is continuing. Top temperature down by the lake is expected to be -10C today, and 5-10cm of new snow is expected. Despite the extended spell of wintry weather, snow depths are fairly shallow – there’s around 25cm of settled snow on the pistes. But you can already ski from the top of the Areskutan all the way down to the lake.

Across the Atlantic, western Canada’s storming start to the season continues. Yesterday, Sunshine village in Banff National Park reported 26cm of fresh snow in 24hrs, and 58cm in five days. Conditions there have been excellent ever since it opened back on November 9, and the mid-mountain snowpack is now a very respectable 134cm deep. Further south, Fernie has had 50cm in the last week. 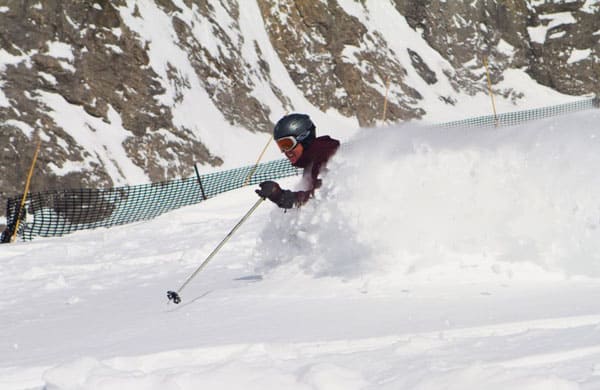 Neither resort, however, can hold a candle to Whistler’s recent snowfall. The west-coast resort has had a whopping 179cm of new snow on its upper slopes in the last week. That’s bad news for sun-seekers: and manna from heaven for the powder hounds. The mid-mountain snowbase is 170cm deep.

Here’s the latest video, showing conditions on Monday. Not sure about the music on this one…

There’s a much better soundtrack on the latest video from Heavenly in California. In common with other Lake Tahoe resorts it was pummelled by a big storm last weekend – and notched up around a metre of fresh snow. Temperatures were mild – so the snow was a little heavy, but it’s helped to build a solid base across the ski area – it’s currently 91-127cm deep.

Meanwhile, in the Rockies, the season is starting to get interesting in Jackson Hole. There was a slow start to winter here, but conditions are now improving, and the mid-mountain snowpack is up to 101cm. There was a 22cm top-up yesterday – and more is expected. 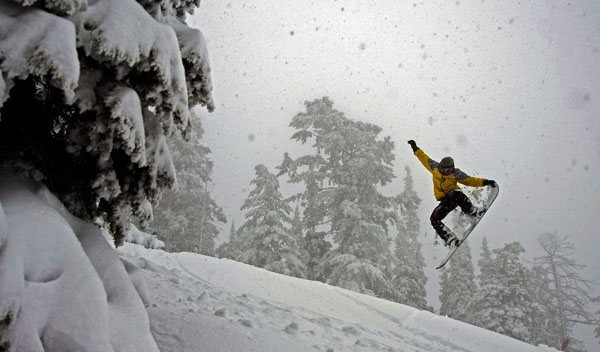