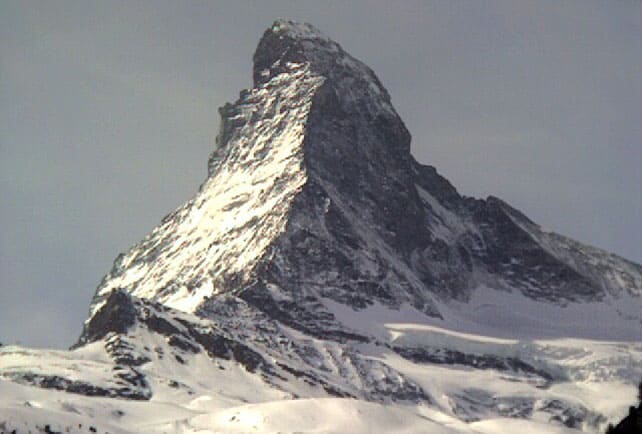 After last week’s wonderfully wintry interlude, spring has returned to the Alps. Sunshine and mild temperatures are the order of the day – although the weather won’t be quite as warm or as settled as it was during the thaw of early March.

In France, the freezing point is expected to hit 2500m today and tomorrow, and 2900m on Wednesday. In Austria, it’s likely to hover around the 2800m mark all week. There are likely to be a few clouds about too: in France local forecasters Meteo Chamonix are predicting isolated showers at the end of each day, which may turn stormy by the end of the week as the pressure starts to drop.

It looks as though the weather will break down at the end of the week. The Pyrenees will be affected first, on Thursday, before wet weather hits the Alps on Saturday. However, it will stay mild – so the precipitation is likely to fall as rain in the lower resorts.

Despite the warm weather, you can still find soft, cold snow on north-facing slopes – especially above 2500m. However, any snow that gets a lot of sun will be melting during the day and refreezing at night. So you want to ski it just as the sun begins to soften its surface each morning. Catch it at just the right moment, and this spring snow is a joy to ski. But let the sun shine on it too long and you’ll be wallowing in a soupy mess. Off-piste, this heavy snow also becomes dangerous as the day progresses, as slopes begin to shrug off their cover in the form of wet-snow avalanches. So a guide is essential if you want to leave the safety of the groomed and way-marked pistes.

For piste skiers, mastering these conditions is much more straightforward. Start on the east-facing slopes in the morning and let the sun warm them up for maybe 20 minutes before you attack them. Ski them no more than a couple of times, and then move on – following the sun around the ski area until you’re facing west. By lunchtime the snow will be heavy even here, so it’s time to knock off for a long break on a sun terrace. You’ll have earned it!

Don’t forget to check out our feature on the best resorts for spring skiing if you’re planning a late-season trip. And in the meantime, here’s a brief survey of the day’s webcam shots.

Pictured below is the glacier above Les Deux Alpes today, high above the effects of the current thaw. Up here, the snow is 220cm deep. 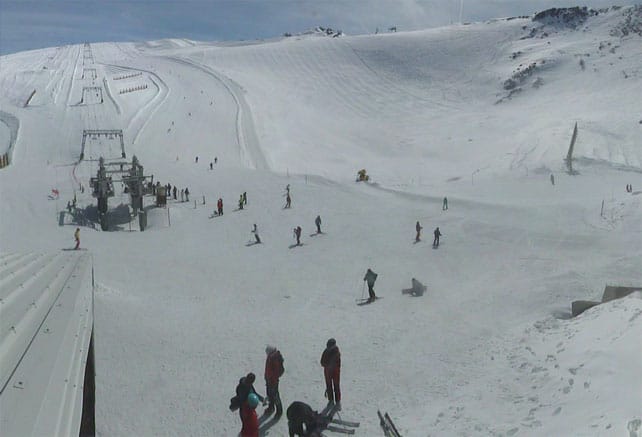 Pictured, below, is high-altitude Tignes, where the snow is currently 91-210cm deep on-piste, depending on altitude. 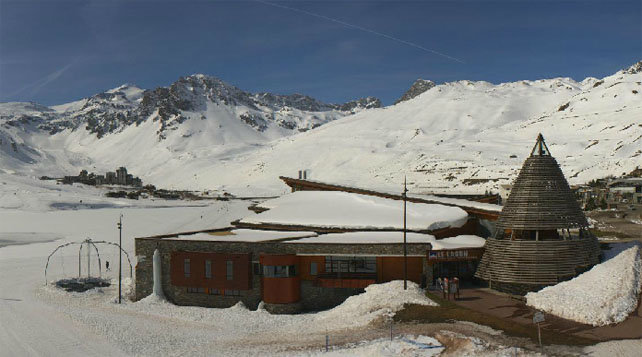 Meanwhile, this is the view towards Val Thorens, from the ridge that separates it from Meribel. The snow here is 120-230cm deep, on-piste.

Pictured, below, is high-altitude Cervinia in Italy, which shares its ski area with Zermatt. Here the snow is 80-320cm deep. 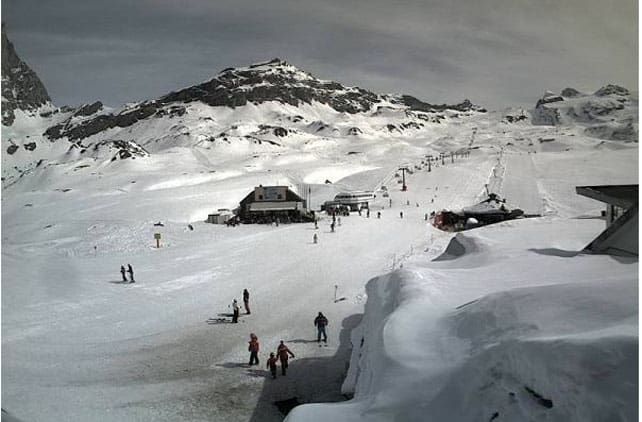 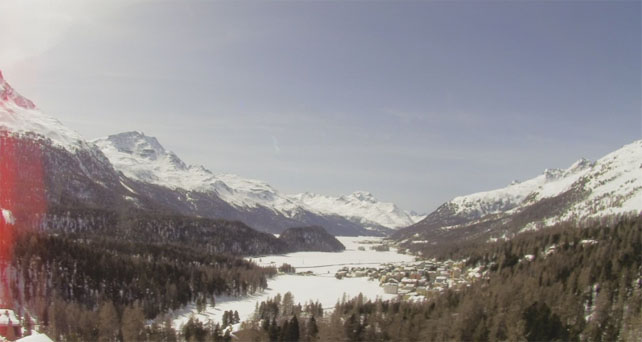 Finally, pictured below is Obergurgl in Austria, where the snow is 39-124cm deep, on-piste.

Lots of powder across the Pond

The contrast between conditions in the Alps and the western US at the moment, is, is – well, it’s annoying, frankly. Resorts in California, Utah, Wyoming and Colorado are all being walloped by the white stuff.

In the Tahoe resorts of California, for example, there was fresh snow last week, fresh snow on Sunday, and there’s more to come over the next couple of days.

Pictured, below, is the scene in Heavenly yesterday, which picked up 30cm of snow from the overnight storm. 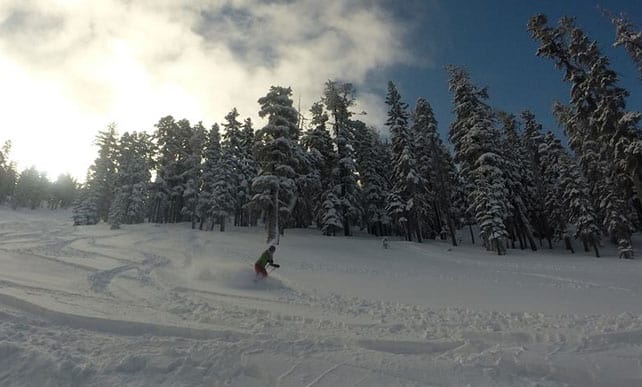 Meanwhile, pictured below is the scene in the The Canyons in Utah on Friday. Another storm rolled through the region yesterday afternoon, dropping up to 27cm of lovely Utah snow across the Salt Lake City ski areas. Yet more snow is due in later today… 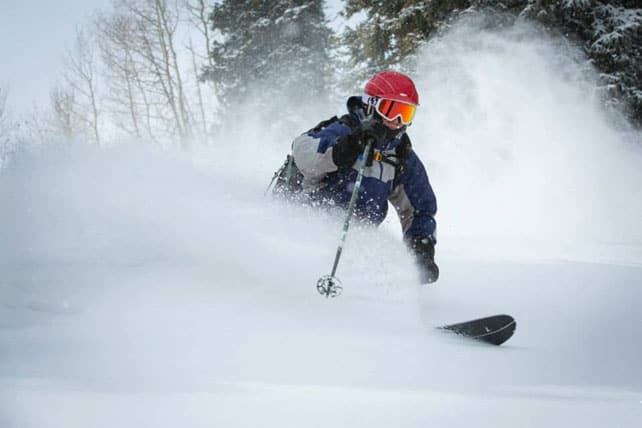 Meanwhile, below was how it was looking in Jackson Hole, Wyoming, on Saturday. Yesterday, the resort reported 30cm of fresh snow from the latest storm – and there’s been more snow since then. 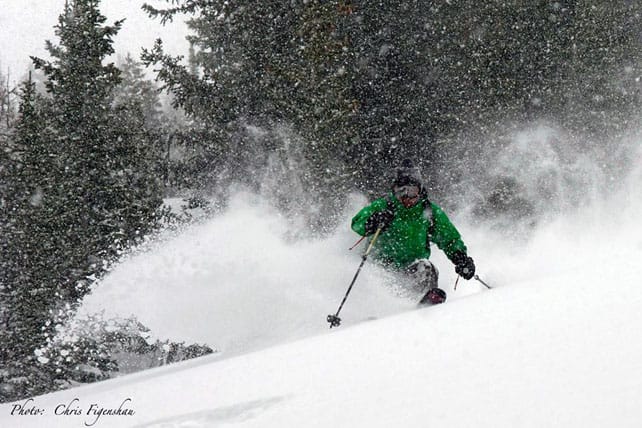 Finally, in case you haven’t seen it already, here is the mouthwatering powder video posted by Breckenridge in Colorado on Friday. More snow was expected in Colorado yesterday afternoon, with another dump forecast for Tuesday.

No Responses to “Snow Report, March 31”