The Snowy Week Continues: But Watch Out for the Coming Thaw 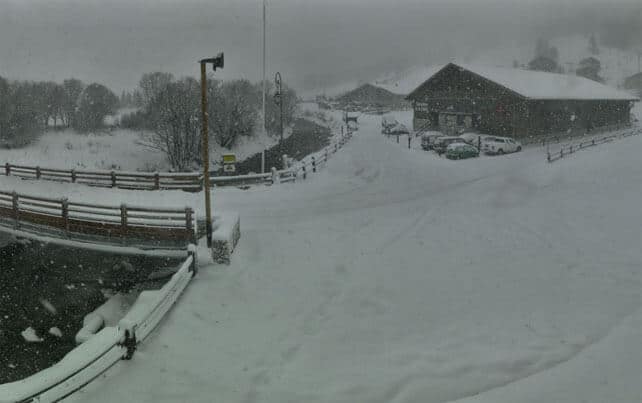 It’s been snowing again in the northern half of the Alps – and there’s more in the forecast.

Overnight there was 5-20cm in many resorts, adding to the base laid down by last weekend’s dump. There should be more snow tomorrow, too – especially in Austria and eastern Switzerland. 10-20cm is likely in many resorts with a few places getting 30cm.

Then, on Saturday night another storm is expected with snow once again falling across the northern Alps. Again, it will favour Switzerland and the Arlberg in Austria.

Here’s today’s snowfall map which gives you an idea of the distribution and amounts expected. 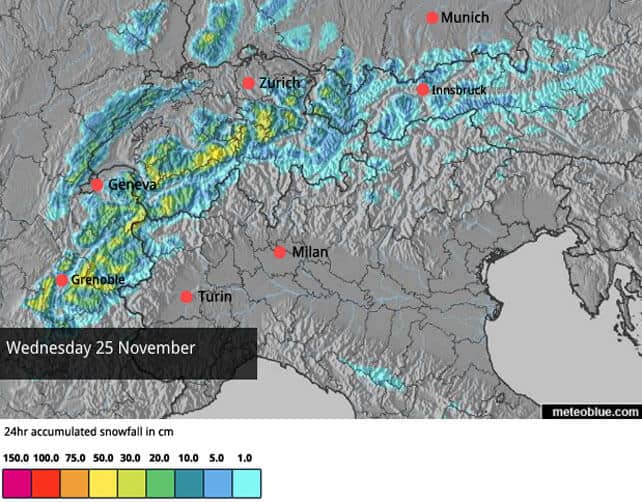 This is the forecast for tomorrow. 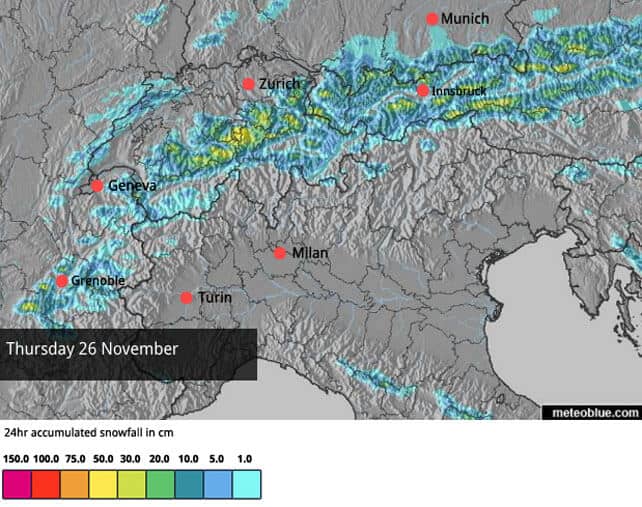 The snow forecast for November 26.

And here’s what’s expected on Sunday, though it’s too soon to be absolutely sure of it. 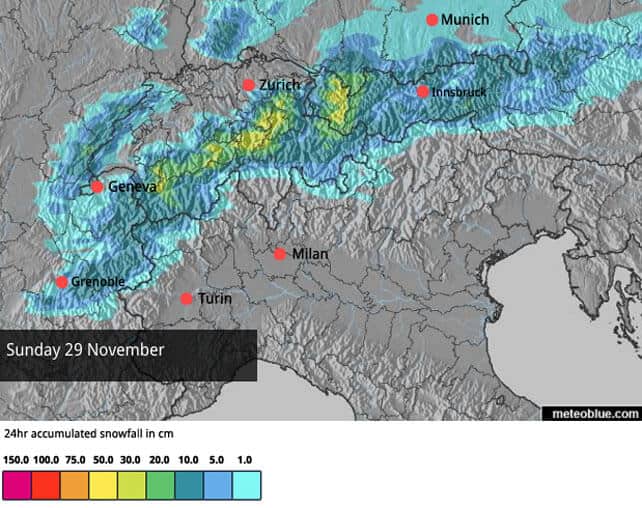 Temperatures are low, the snow cannons have been working hard in many resorts and with Mother Nature’s significant contribution this week, the high-altitude resorts are sitting pretty. With what many see as the first weekend of the mainstream ski season approaching, the timing’s been spot-on.

Pictured below was Tignes, earlier today. It’s had 10cm more snow at village level and about 20cm on the glacier, adding to the 65cm+ which fell at the top of the resort at the weekend. You can already ski at altitude here, but on Saturday the links will be open to neighbouring Val d’Isere as well, and by the looks of things they won’t short of snow. 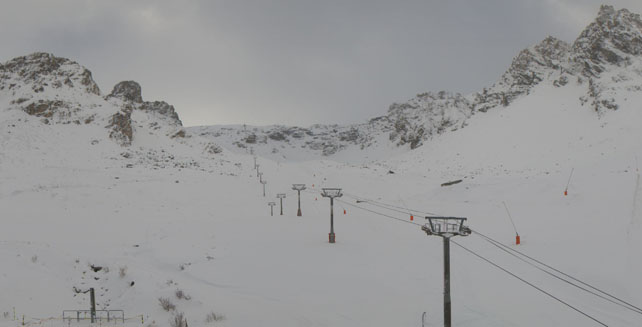 Meanwhile, this was Val Thorens today. Originally Val Thorens’ date was November 21. It was pushed back to November 28 because of the mild autumn: but today they’ve opened seven pistes early, thanks to the wintry turn in the weather. 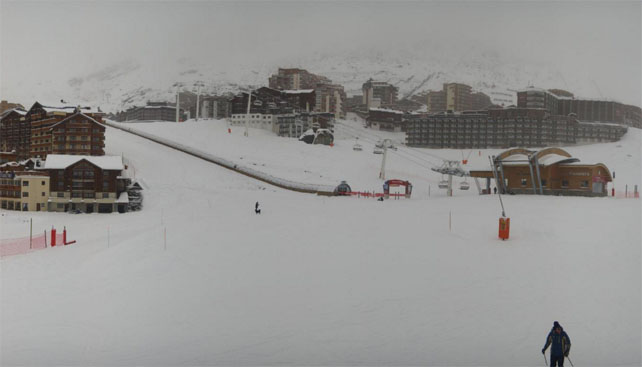 And this was the Grand Montets above the Chamonix valley. There will be a limited opening here at the weekend, as well as in Les Houches.

Pictured below was Serre Chevalier this morning. There’s been less snow down here than in the resorts further north: but check out all the bumps by the snow cannons. Clearly, they’ve been making their own cover. Serre Chevalier expects to open for the season on December 5. 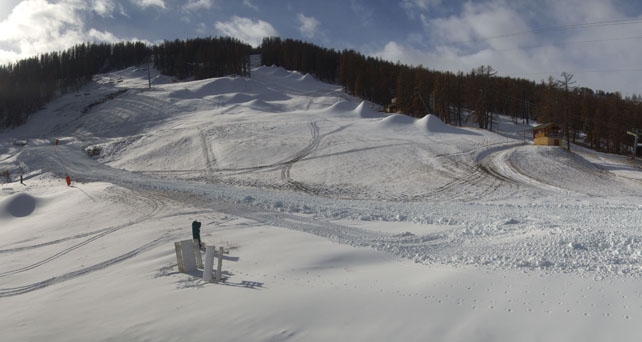 Another resort which opens this weekend is Ischgl in Austria. Ischgl’s snow-making and grooming teams do a brilliant job (as was shown during last year’s slow start to winter), and you can expect plenty of skiing here from Day 1. Here’s how it was looking yesterday, during the sunny spell between the storms. 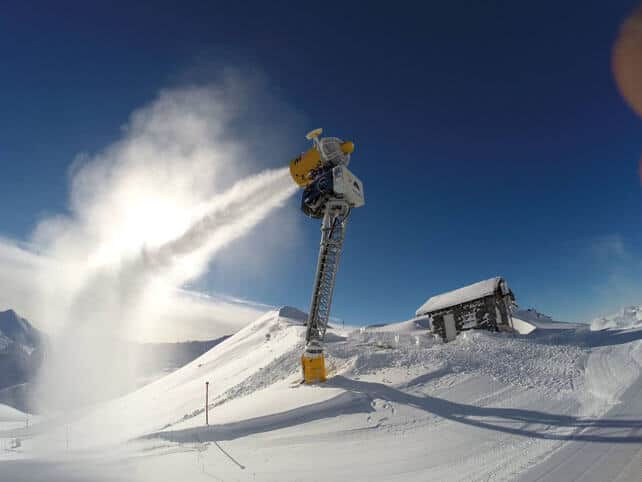 And here’s how it’s looking above high-altitude Obergurgl, which has been up and running since November 12. 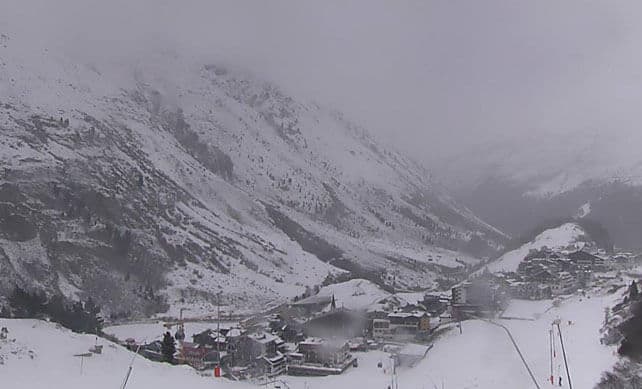 In Austria, one of the big beneficiaries of the recent change in the weather has been the Arlberg. This is Lech, which had half a metre of snow at the weekend and 10cm more today. It opens on December 4. 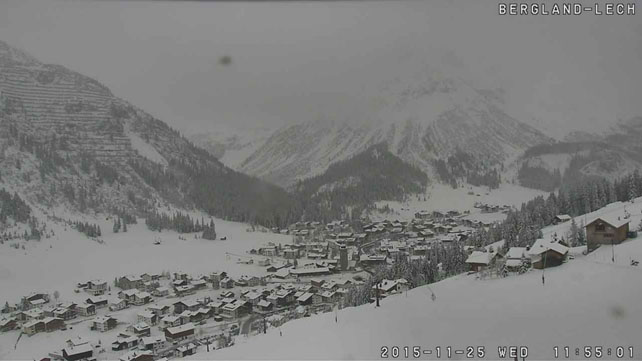 Meanwhile in Switzerland, Verbier has announced it will be opening its first pistes on Friday, November 25. There’s been more snow there overnight, but before it came, they got a drone up to prove how much snow fell at the weekend.

Sadly, the southern half of the Alps has missed out on most of this natural snowfall, but they’re taking advantage of the low temperatures to run the snow cannons hard, as you’ll see from this webcam shot in Madonna di Campiglio. 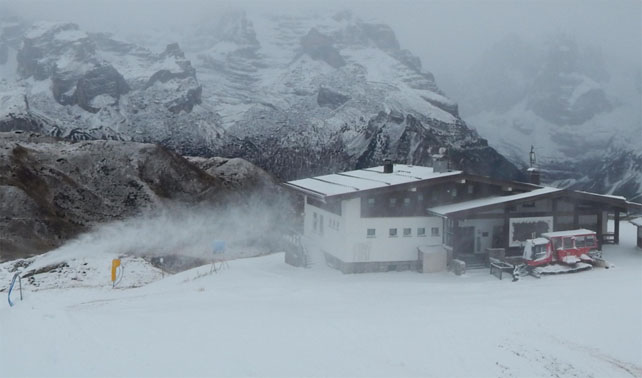 The not-so-good news is that next week the mild, sunny weather that characterised the much of October and early November will probably make a comeback. It’s not absolutely certain yet, but the mid-range weather models are all predicting it, and by Tuesday the daytime freezing point could be back up to 3000m. The best time to ski the new snow will probably be Monday, as skies clear and before the temperature jumps. And then it will be time to migrate to the very highest slopes.

In other words, it increasingly looks as though this is a winter preview rather than the start of the main event in the Alps. If you’re planning to ski before Christmas, make sure you aim for a high-altitude resort.

It looks as though the Pyrenees are getting more snow than the Alps today. In France, Cauterets is expecting half a metre of the white stuff. The lifts here open on Saturday. 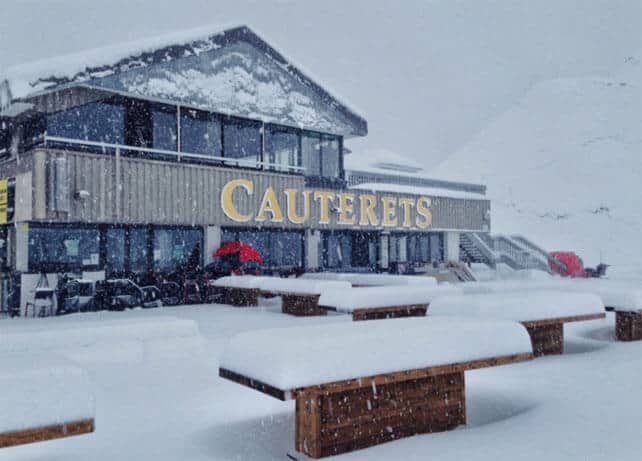 It’s snowing in Andorra too. Both the Grandvalira and Vallnord ski areas are due to open this weekend. 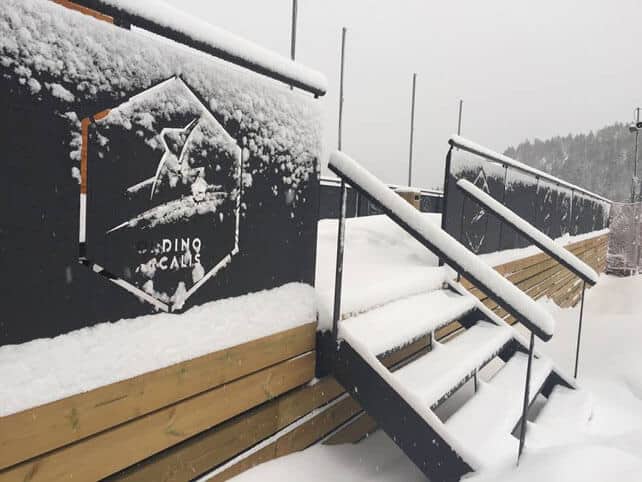 Here too, however, you can expect a return to much milder conditions next week.

Fresh Snow for Thanksgiving in the USA

How obliging! Across many resorts in the western USA, a storm is delivering a top-up of snow in time for Thanksgiving.

The storm has already hit California, and is expected inland later today.

Pictured below is how the snowstake was looking at the lovely, rootsy resort of Kirkwood last night. They’ll get some more today before it moves on. The resort has around half a metre of snow bedded down, mid-mountain, but only about a quarter of its trails are open so far. They’ll doubtless open up more terrain tomorrow, for Thanksgiving. 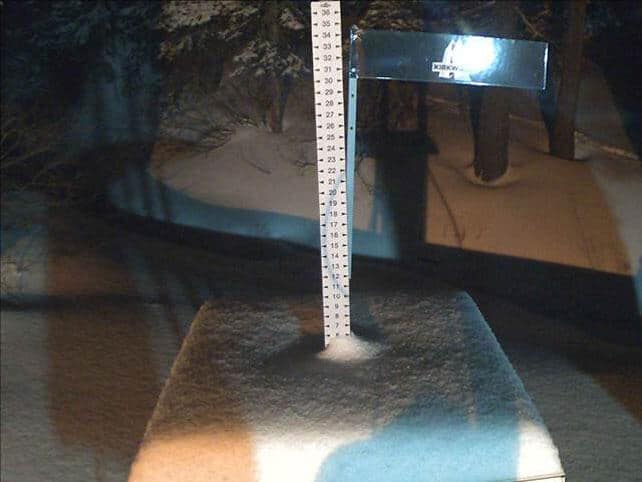 Local snow guru Bryan Allegretto reckons the resorts around Lake Tahoe should get 13-28cm of snow from the latest storm, with snow showers to follow during the holiday period. What he’s really excited about, though, is what many forecasters are describing as a “classic El Nino weather pattern” which is establishing itself over the continent. Key features are a big ridge of high pressure over the central US and Canada, and a trough of low pressure off the west coast, which has the potential to push heavy snow into California. Next week is looking promising. “If the the trough is able to push close enough to the West Coast, we could see feet instead of inches,” he said in yesterday’s report.

Meanwhile, inland, both Utah and Colorado are expecting snow. In Utah, Park City should see something in the region of 15cm of snow by the end of the Thanksgiving and Snowbird and Alta about 30cm. In Colorado there’s going to be snow, off and on, throughout the holiday period, with Wolf Creek in the south likely to get most of the snow.

Meanwhile, further north, Whistler had a little snow at the start of the week and posted this video yesterday.

Only the top half of the Whistler mountain is currently open, but more terrain will be coming on stream tomorrow, when Blackcomb opens too. The outlook is sunny – as it is in Lake Louise, in Banff National Park, where the mercury dipped to -25C last night. Lake Louise had a very snowy mid-November, but the weather has calmed down now. There’s been just 12cm of new in the last week. However, it will stay chilly until next Monday, at least.

Here’s the fantastic view from the top, as seen yesterday. 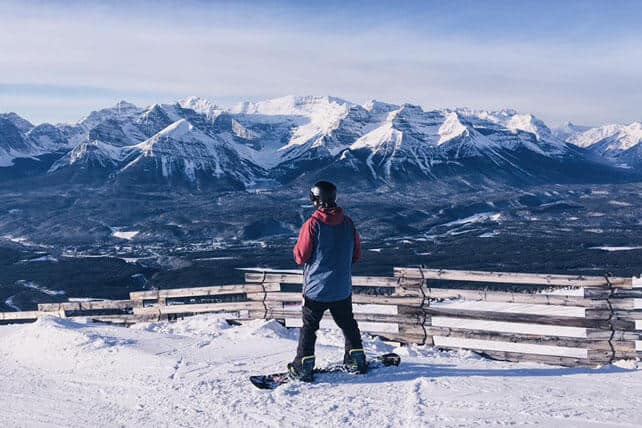 No Responses to “The Snowy Week Continues: But Watch Out for the Coming Thaw”